The number of hit songs that feature lyrics referencing marijuana has increased dramatically over the last 30 years, according to a new study. And researchers believe that growing public acceptance of cannabis is fueling a trend that has resulted in more than three out of four top 40 songs in the U.S. now containing shout-outs to weed.

The study, published last week in the Journal of the American Board of Family Medicine, sought to identify a link between popular music and drug trends in the U.S., with a main focus on opioids. Researchers at the University of Minnesota and Wayne State University examined the lyrics of Billboard’s top 40 songs for each year from 1986 to 2016, filtering for songs that reference marijuana, alcohol, opioids and tobacco.

During the time period under review, references for all categories except tobacco increased.

The first mentions of cannabis appeared in 1989, for example, with fewer than five references in that year’s top 40 chart, as ranked by Billboard. But by 2016, there were more than 30 marijuana references, more than for any other substance tracked in study. 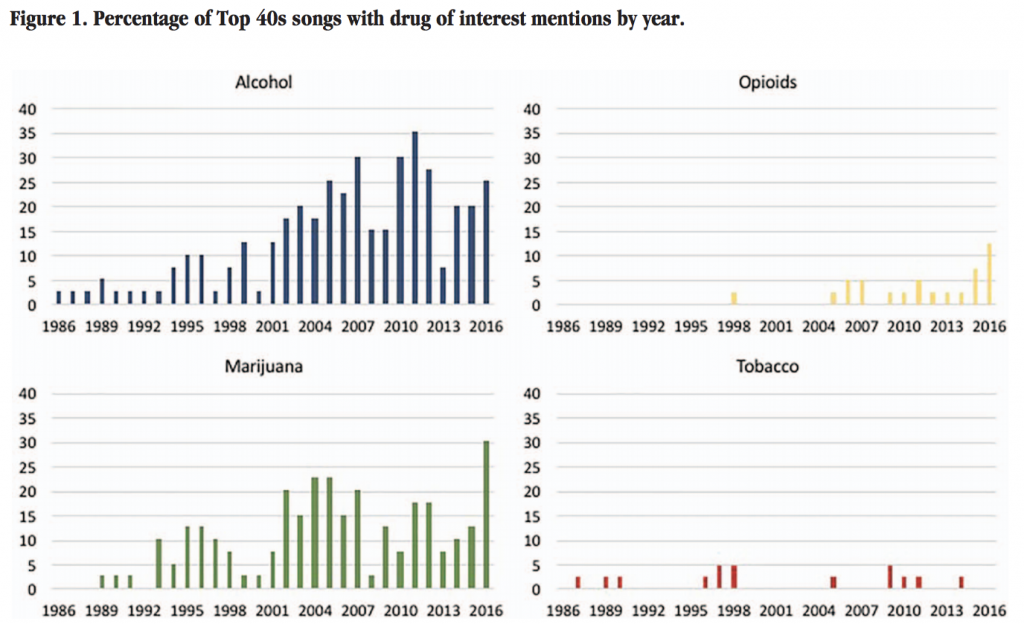 Via the Journal of the American Board of Family Medicine.

Public acceptance of marijuana use for medical or recreational purposes also grew demonstrably over that time span, which may have “influenced the acceptability of mentioning marijuana in Top 40’s music,” the researchers wrote.

“If this demonstrated ‘acceptability’ trend is mirrored through a similar rise in the mention of opioid narcotics in Top 40’s music, America’s epidemic of overdose fatality may continue to escalate.”

References to opioids, including heroin and prescription painkillers, weren’t featured until the late 1990s, according to the analysis. That same decade marked the beginning of a larger push on the part of pharmaceutical companies to promote opioid-based painkillers.

“Over 50 percent of current Top 40’s hit references discuss narcotic prescription or synthetic medication use, with the most common references including codeine, Percocet, and even remifentanil, among others,” the study found.

Those results should be instructive to public health officials, the researchers argued. Because “if reference to opioid medications continues to become ‘casual or trendy,’ as exemplified in the prose of many popularly aired lyrics, a more targeted public awareness campaign may be warranted to combat this growing national public health concern.”

“Further inquiry may be warranted to evaluate the societal impact and persuasive abilities of popular culture, including Top 40’s music, on American drug and alcohol use,” the researchers concluded.