It’s well known that there’s growing bipartisan support for marijuana legalization in the U.S.. But a newly released survey from the Pew Research Center reveals significant intraparty differences in how people of varying political perspectives view the issue of legalizing cannabis for recreational use. At the same time, there is a broad consensus across ideological lines that patients should be able to legally access marijuana for medical purposes.

At a top level, the poll identifies a common trend: Democrats are more likely to support full marijuana legalization than Republicans are. But it’s not that simple. Pew placed respondents in one of nine political cohorts across the spectrum and found that opinions on marijuana policy can vary significantly, even among people who share core sociopolitical beliefs.

“Partisan polarization remains the dominant, seemingly unalterable condition of American politics. Republicans and Democrats agree on very little—and when they do, it often is in the shared belief that they have little in common,” Pew said in its report, which was published last week. “Yet the gulf that separates Republicans and Democrats sometimes obscures the divisions and diversity of views that exist within both partisan coalitions—and the fact that many Americans do not fit easily into either one.”

While recent polls have found a growing percentage of Republicans are embracing marijuana legalization, the Pew data offers a window into where that surge in support is coming from. Principally, it’s the so-called Ambivalent Right, the youngest conservative group, which backs legalizing medical and recreational legalization at 60 percent.

People classified in the Ambivalent Right cohort “hold conservative views about the size of government, the economic system and issues of race and gender. But they are the only group on the political right in which majorities favor legal abortion and say marijuana should be legal for recreational and medical use,” Pew said. 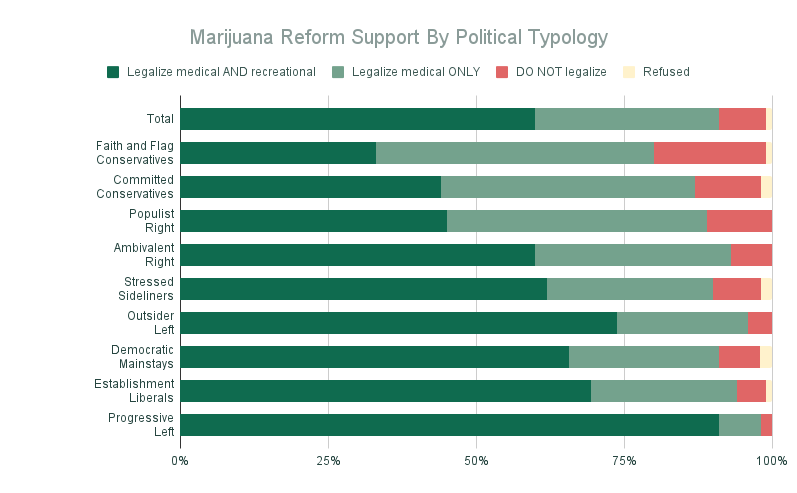 That’s the only right-leaning typology expressing majority support for adult-use and medical cannabis legalization. But two of the others—the Populist Right and Committed Conservatives—do hover just under the 50 percent mark. The exception is “Faith and Flag Conservatives,” only 33 percent of whom said they favor full legalization.

People grouped into that cohort “are intensely conservative in all realms; they are far more likely than all other typology groups to say government policies should support religious values and that compromise in politics is just ‘selling out on what you believe in.'”

But despite the deep conservative beliefs of this group, 47 percent of respondents who fit the bill still said that cannabis should be legal for therapeutic use. By contrast, only 19 percent said marijuana should be totally prohibited.

Committed Conservatives and the Populist Right, however, are fairly evenly divided on recreational cannabis legalization. 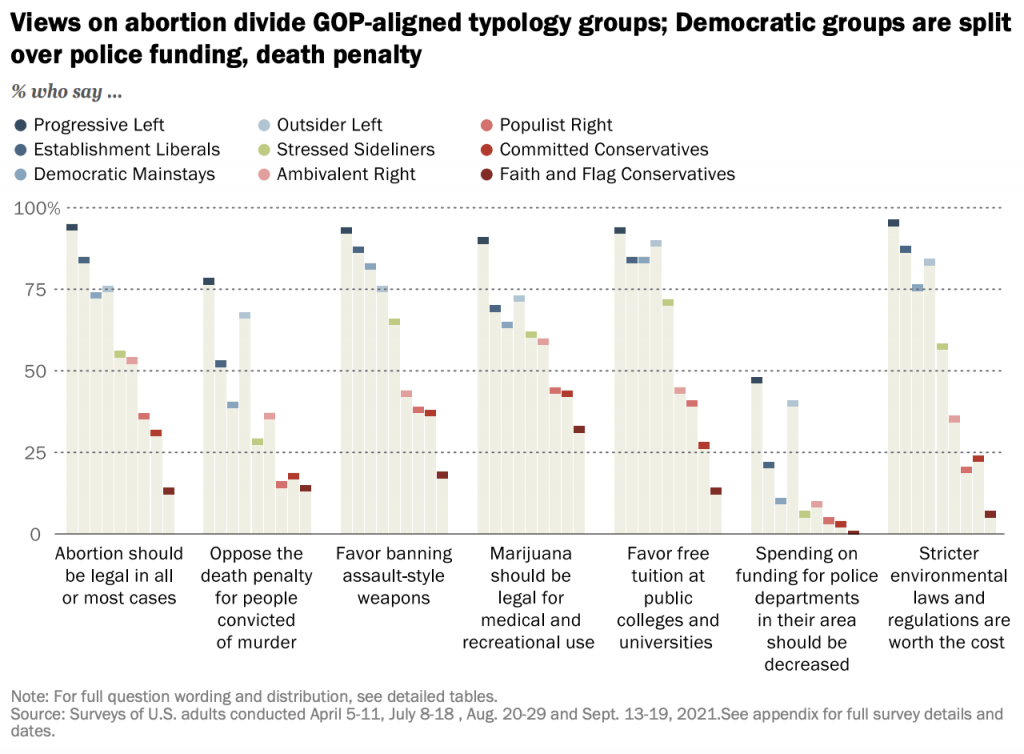 The Populist Right are conservatives with lower levels of education who are likely to live in rural places. The poll found that 45 percent of people in this group back adult-use and medical legalization, while 44 percent said just medical cannabis should be legal.

Just 11 percent of respondents from each of those two categories said marijuana should be outright banned.

Meanwhile, Stressed Sideliners, a centrist cohort that’s defined by low political engagement and a “mix of conservative and liberal views,” also support ending prohibition across the board at 62 percent.

On the left side of the spectrum, there was majority support for marijuana legalization among every typography of Democratic-leaning respondents. But even so, there was a 26 percentage point difference between the Progressive Left, who back full legalization at 91 percent, and Democratic Mainstays that support the reform at 65 percent.

The Mainstays are “the largest Democratic-oriented group, as well as the oldest on average,” Pew said. The Progressive Left, meanwhile, “have very liberal views on virtually every issue and support far-reaching changes to address racial injustice and expand the social safety net.”

Seventy percent of Establishment Liberals, defined as people with progressive views but who feel less inclined to back sweeping change, support adult-use and medical marijuana legalization. And 73 percent of the Outsider Left feel the same. That group is “very liberal in most of their views, but they are deeply frustrated with the political system—including the Democratic Party and its leaders.”

Overall, the poll—which was based on interviews with 5,109 Americans from April 5-11 and incorporated into the broader survey released this month—found that 60 percent of respondents favor broad legalization, 31 percent support medical cannabis legalization and just 8 percent say it should be prohibited altogether.

This is the latest in a series of polls showing that most Americans are ready to end prohibition.

That came days after a survey from Gallup found that 68 percent of U.S. adults said they back legalizing cannabis.

That’s the same percentage that the firm reported for its last poll in November 2020, where support had reached its highest level since 1969.

The release of these poll results comes as congressional lawmakers continue to pursue reform. A key House committee approved a legalization bill in September, and Senate leaders are also pushing a plan to end federal cannabis prohibition. Additionally, a new Republican-led effort to federally legalize and tax cannabis was introduced in the House on Monday.

Yet, despite the solid public support for reform, particularly among Democrats, President Joe Biden continues to oppose adult-use legalization. Instead, he’s supportive of more modest proposals to federally decriminalize cannabis, legalize the plant for medical use and let states set their own policies.

While the president is personally against comprehensively ending prohibition, the Congressional Research Service released a report this month explaining steps he and his administration could take to repair the harms of cannabis criminalization.

For example, as multiple Pennsylvania lawmakers introduce bills to legalize cannabis, support for the reform is at a record high in the state, according to a recent survey.

At the national level, Gallup released a survey in August showing that nearly half of American adults have tried cannabis.

Last year, the firm also published a survey finding that about 70 percent of Americans view smoking cannabis to be a morally acceptable activity. That’s higher than their views on the morality of issues such as  gay relationships, medical testing of animals, the death penalty and abortion.