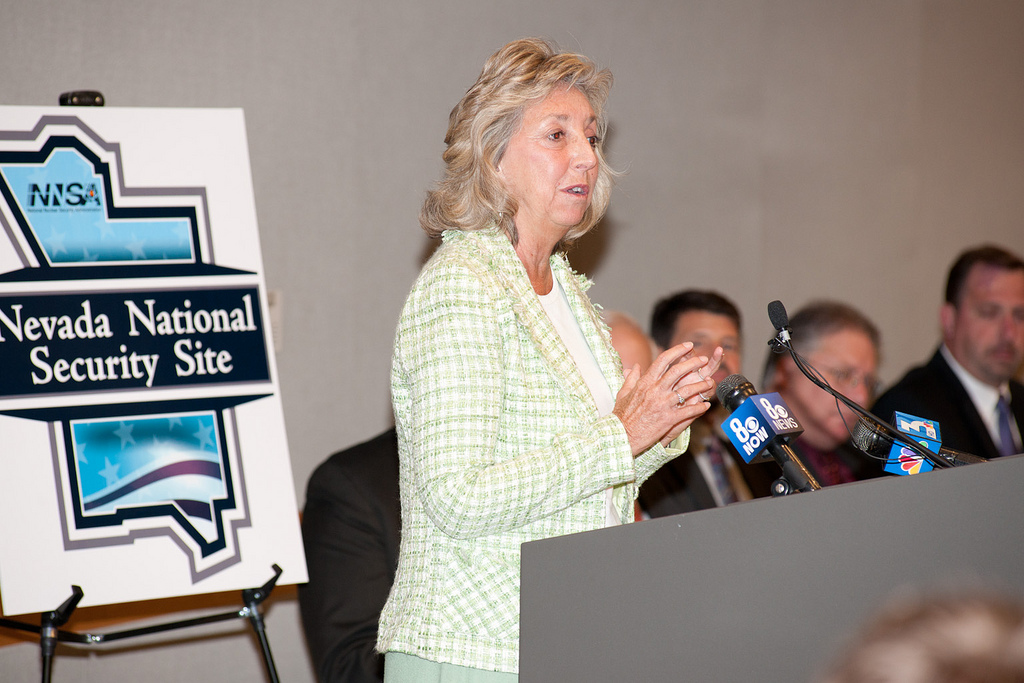 Congresswoman Dina Titus voted for the marijuana legalization measure on Nevada’s ballot a year ago. Since then, she has been fighting on Capitol Hill to get the federal government to respect the decision she and a majority of her constituents made to end prohibition.

The Las Vegas Democrat has sponsored or signed onto bills and amendments that would protect state laws from Justice Department interference, allow marijuana businesses to use banks and let military veterans access medical cannabis recommendations through government doctors, among others.

Those measures haven’t advanced, however, because of roadblocks thrown up by Congressional Republican leadership.

But even though the GOP-controlled House Rules Committee won’t allow floor votes on marijuana amendments, and Speaker Paul Ryan hasn’t done anything to help, Titus said in an interview that cannabis isn’t just an issue for Democrats.

“This was not partisan,” she says of the measures she has supported. “It was heavily Democratic but we had Republicans supporting these amendments. I think if they came to the floor they would pass.”

Titus says that “Republicans aren’t going to buck their leadership and sign a discharge petition” to circumvent committees and force measures to the floor, but she is hopeful that shifting poll results on legalization and the growing number of changing state laws will make Congress come around soon.

“We’re going to keep on beating the drum, and I think you reach a tipping point because every cycle there are more initiatives and more efforts by state legislatures to legalize marijuana in some fashion. It’s over half of the states that have it now,” she says. “So when public opinion shifts…and more states make it legal, then the Republicans are going to have to respond.”

Titus believes it is important that she tailor her pitch when trying to convince fellow members of Congress to support cannabis legislation.

“You make the argument based on who you’re talking to,” she says. “Some believe it’s a criminal justice issue. Others believe it’s a states’ rights issue. Others see it as a medical opportunity issue. You’ve got a few who are just old stoned hippies who want to do it.”

For her part, Titus says that in addition to representing the views of her constituents, she has focused so much of her time on cannabis law reform because of people she knows who are impacted by current policy.

“I have many, many veterans in southern Nevada, and I have seen the problem of opioid addiction and I think that medical marijuana is a viable option,” she says. “And I’ve heard the stories of families of children with epilepsy who say this is the only way their children can get relief from having episodes. You hear stories like that, you think, ‘We’re missing the boat if we’re not looking at all the possibilities.'”

The congresswoman has also built relationships with marijuana business operators that she represents in her district.

“A lot of people in Las Vegas who are my constituents are in this business, and I have visited a number of the dispensaries,” she says. “There are not little head shops on the corner with black lights and pictures of Che Guevara. There are very professional operations. They’ve got agronomists, they’ve got scientists. They are respectable places with high security. They improve the neighborhood. They don’t bring it down.”

Titus thinks Nevada officials have done a good job implementing what voters approved, partially because the state has previously been a pioneer in regulating formerly prohibited activity, namely gambling.

“I think that’s pretty well shaken out,” she says. “This is a whole new area for us, but we have experience regulating something that’s kind of unusual because of our gaming and I think we were able to adjust to it pretty well.”

But for now, there’s no overlap between the state’s cannabis and gaming industries, largely because regulators for the latter have prohibited casinos from entering the marijuana trade.

“It won’t happen until federal legislation happens, because gaming is so tightly regulated and they’re not going to take any chances of losing a license or having the feds step into the gaming world because of marijuana,” Titus says. “It’s kind of like the banks that don’t want to do business with marijuana companies because of federal regulation. So it’s going to take not just becoming mainstream or not just becoming legalized at the state level, but federal action before that happens.”

One area where Titus does see opportunity for advancement without Congressional action is improving military veterans’ access to medical cannabis. Under current Department of Veterans Affairs policy, government doctors are not allowed to fill out medical marijuana recommendation forms, even in states where it is legal.

Despite some victories on the House floor and in a Senate committee, efforts to force a change at the VA haven’t been enacted into law. But VA Sec. David Shulkin could change the policy himself, if he wanted to.

“I’m very disappointed in the VA not moving this forward,” she says. “I think they should do it without legislation.”

The issue is particularly important in light of increased attention being paid to opioid addiction and overdoses. “The veterans who want to try [marijuana] have to use it on their own, pay for it out of their own pockets and who knows how it interacts with other things that are being prescribed,” Titus says. “The opioid crisis, I think, has been perpetuated by the VA because it’s so much easier to give somebody a pill than it is just to deal with some of the demons that they may face or some of the real physical problems. Veterans come back now not with just one injury but maybe 10, 12 injuries because of the new science on the battlefield.”

On broader marijuana enforcement issues, despite concerning comments from U.S. Attorney General Jeff Sessions and other Trump administration officials, there have been no formal policy changes announced this year.

“We’re just in limbo,” Titus says. “That can be as bad as knowing what you have to face even if it’s something you don’t like.”

The congresswoman remains optimistic about shifting tides on marijuana issues, however, and in particular is impressed by how the legalization movement and the industry it has created have stepped up their game.

“The groups that represent different aspects of the medical marijuana and recreational marijuana industry are getting much more energized, much more mobilized, much more professional in their lobbying efforts,” she says. “I think you’re going to see that start to increase.”