Illinois set yet another marijuana sales record in January, with nearly $89 million in adult-use cannabis purchases in the first month of 2021.

Pandemic notwithstanding, people are still flocking to marijuana retailers one year after legal sales launched. The state has generally seen this upward trend in cannabis purchases since the market went online.

Of the $88 million spent on nearly 1.9 million adult-use marijuana products last month, more than $25 million came from out-of-state visitors, the Illinois Department of Financial and Professional Regulation said in an updated notice on Tuesday. 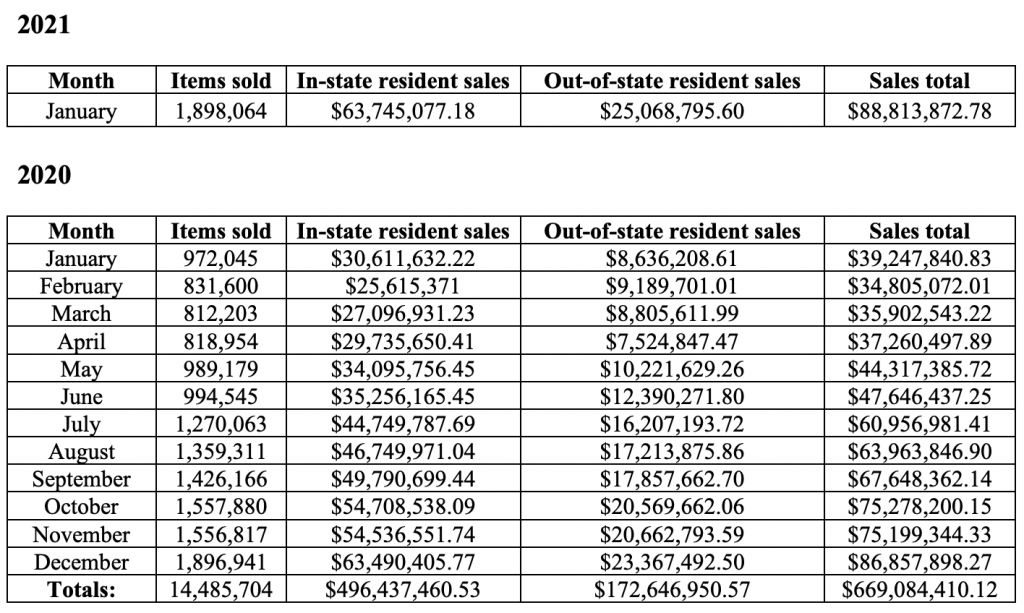 For context, last month’s sales figures are more than double what they were in January 2020, the first month of legalization. Meanwhile, out-of-state sales from this January roughly match the total in-state purchases from February 2020 ($25,615,371).

Meanwhile, the Department of Public Health separately reported on Wednesday that the state’s medical cannabis program saw nearly $33 million in sales in January.

Recreational marijuana now represents the lion’s share of marijuana purchases in the state. Combined with medical cannabis sales, Illinois saw more than $1 billion dollars spent in the market in 2020. And officials have emphasized that tax revenue from those sales is being put to good use.

For example, the state announced last month that it is distributing $31.5 million in grants funded by marijuana tax dollars to communities that have been disproportionately impacted by the war on drugs.

Awarding the new grant money is not all that Illinois is doing to promote social equity and repair the harms of cannabis criminalization. Gov. J.B. Pritzker (D) announced in December that his office had processed more than 500,000 expungements and pardons for people with low-level cannabis convictions on their records.

But promoting social equity in the state’s cannabis industry hasn’t been smooth sailing. The state has faced criticism from advocates and lawsuits from marijuana business applicants who feel officials haven’t done enough to ensure diversity in the industry.

After months of delays, officials finally sent notices last month to marijuana craft cultivation, infusion and transportation license applicants about how they can improve their proposals. And additional notices will be sent soon to applicants who didn’t qualify for the 75 dispensary licenses that were up for grabs in a lottery.