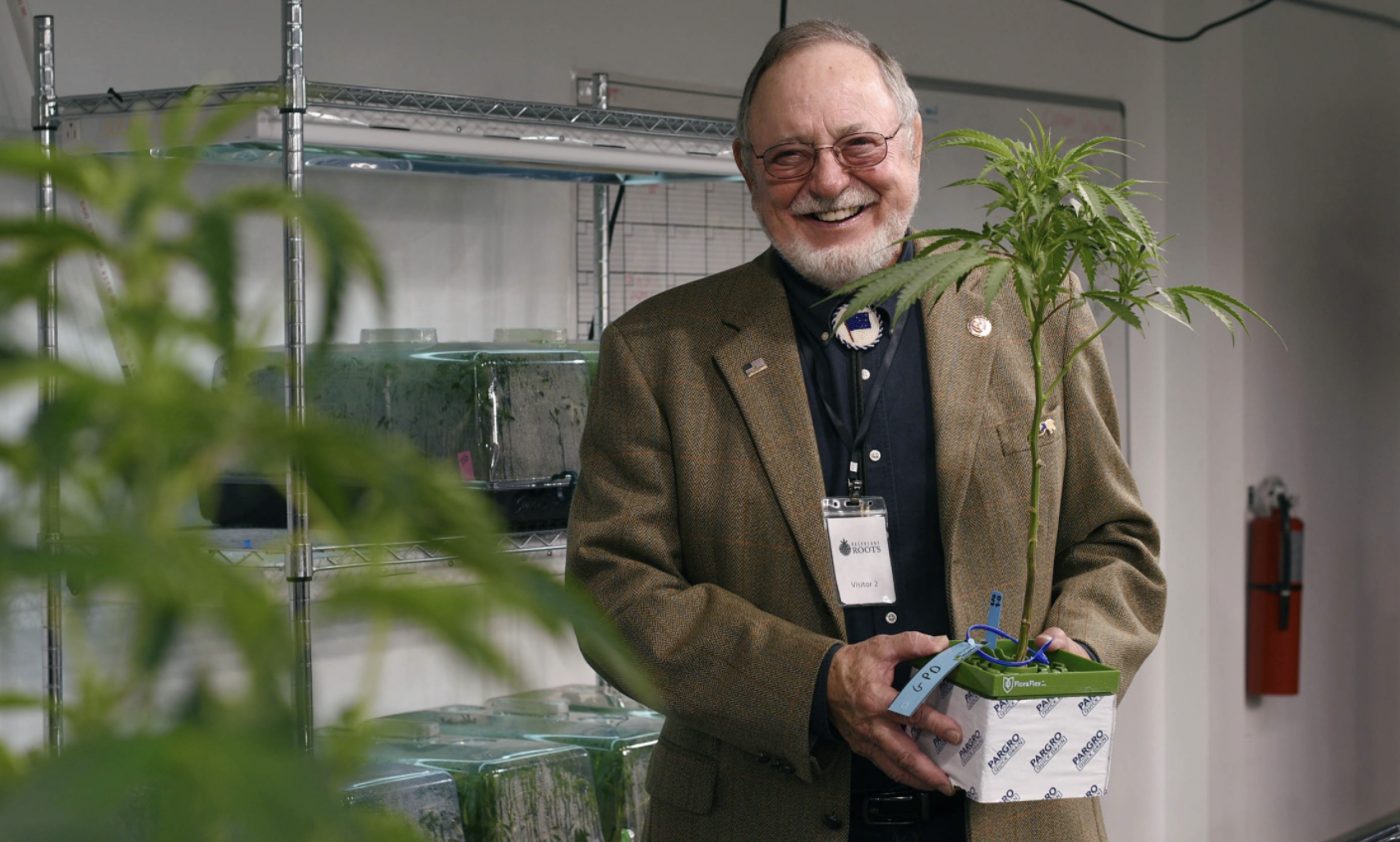 Rep. Don Young (R-AK)—a rare example of a pro-legalization Republican congressman, who was one of just five GOP members of the House of Representatives to vote in favor of a bill to end marijuana prohibition—died on Friday.

As the longest-serving member of the House and one of four co-chairs of the bipartisan Congressional Cannabis Caucus—along with Reps. Earl Blumenauer (D-OR), Barbara Lee (D-CA) and Dave Joyce (R-OH)—Young left a legislative legacy on the issue that crossed partisan divides.

The surviving co-chairs said in a joint statement on Sunday that Young “was dedicated to ensuring Alaskans and all Americans had the opportunity for a better life not just for today, but also for tomorrow and the future.”

“It was with that dedication that he helped found this caucus and created a forum where any and all members could engage, discuss and learn about the need to establish a more rational approach to federal cannabis policy,” they said. “As the four of us worked together across party lines to advance this important issue, we watched it gain more momentum with the American people than ever before. Don’s legacy of bipartisanship is the foundation on which we will continue to build the consensus necessary to enact impactful reform that will address our outdated federal cannabis laws.”

Don Young’s legacy of bipartisanship is the foundation on which I will continue to build the consensus necessary to enact impactful cannabis reform with @repblumenauer @RepBarbaraLee, my Cannabis Caucus Co-Chairs.

In a Twitter post early on Saturday morning commenting on the news of Young’s passing away during a plane flight while sitting next to his wife, Lee said, “As Cannabis Caucus Co-Chair, Don was a fierce advocate for ending the failed war on drugs. My thoughts are with his wife, family, his staff and his constituents.”

Rest In Peace to the Dean of the House, @repdonyoung. I send my deepest condolences to his family & loved ones.

As Cannabis Caucus Co-Chair, Don was a fierce advocate for ending the failed war on drugs. My thoughts are with his wife, family, his staff and his constituents.

Joyce, for his part, tweeted that it was the late congressman who “taught me how to lean into an issue and create a path where no one had tread before” and that it was an “honor to serve alongside him” on the Cannabis Caucus.

I’ve never met a force like Don and I doubt I ever will again. His shoes are ones that cannot be filled and I will miss him dearly. Rest easy, my friend.

Young, who was 88, was also one of five GOP cosponsors of a separate bill to end federal prohibition and regulate cannabis that was introduced this session by Rep. Nancy Mace (R-SC) as an alternative to more wide-ranging Democratic-led proposals like the one that passed the House in 2020.

Mace, in a tweet on Friday, called Young “a leader for Americans, Alaskans, and cannabis reform,” saying that he “dedicated his life for the better of so many in this great nation.”

Saddened to hear of passing of Rep Don Young. A leader for Americans, Alaskans, and cannabis reform. Dedicated his life for the better of so many in this great nation. #DoitforDon

Don Young, dean of the House, dies at 88 – CBS News// Don Young was a gentleman.He built friendships across the aisle.He voted for transportation bill.When I needed Republican co lead on marijuana reform Don was there! He was a friend to me.I’ll miss him. https://t.co/2Ss2a9sFmE

It’s not yet clear who will replace Young as a GOP co-chair of the caucus, though as noted above there are only a handful of Republican members of Congress who have voted in favor of or cosponsored legalization proposals.

Last year, Joyce and Young introduced a bill titled the “Common Sense Cannabis Reform for Veterans, Small Businesses, and Medical Professionals Act.” It would have federally legalized cannabis, protected banks that service state-legal marijuana businesses and ensured that military veterans were specifically permitted to use the plant in compliance with state laws.

Young and Joyce also teamed up last year to put pressure on President Joe Biden and Vice President Kamala Harris, sending a letter to the administration criticizing their “lack of action” and “continued silence” on marijuana reform and calling for cannabis to be rescheduled under federal law.

The GOP pair sent a separate letter earlier that year imploring Biden to keep his campaign promise and move to federally reschedule cannabis under the Controlled Substances Act (CSA). The modest reform is “a matter of public health,” they wrote.

Late last year, all four co-chairs of the Congressional Cannabis Caucus demanded that the U.S. Department of Veterans Affairs (VA) institute a policy change to ensure that military veterans can access cannabis for therapeutic use.

In 2019, Young made a series very photogenic visits to marijuana businesses in his home state of Alaska. 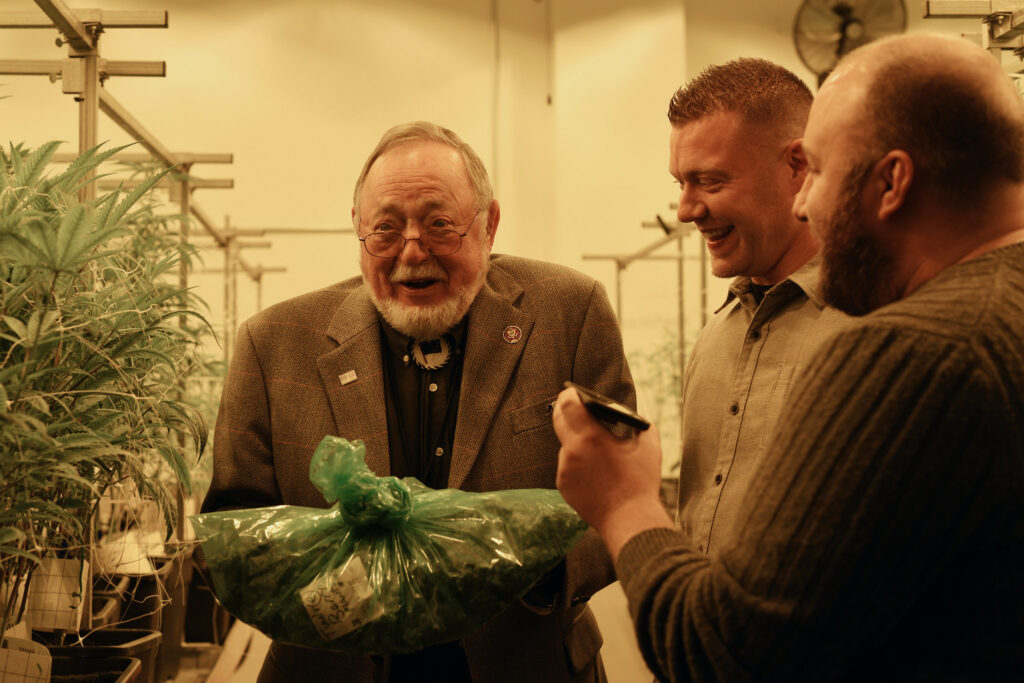 Via The Alaska Landmine.

“Truthfully I can say I’ve never smoked a joint—and I didn’t inhale either,” he said at the time, according to The Alaska Landmine. “It’s not my interest, and I appreciate people that use it, and I understand the benefits for it. It’s just not my thing. I’m just saying if you are going to have a business you have to have the ability to run legally with all the benefits of other businesses.”

Young sponsored, cosponsored or voted for a wide range of marijuana reform legislative over his decades-long career in Congress.

From protecting Native American tribes from losing federal benefits for operating cannabis programs to enacting marijuana banking reform, the congressman ran the legislative gamut on cannabis issues during his time in office.

He also led a measure last year to protect Second Amendment rights for marijuana consumers by exempting people in legalized states from a federal restriction that bars any “unlawful user” of a controlled substance from owning a firearm. 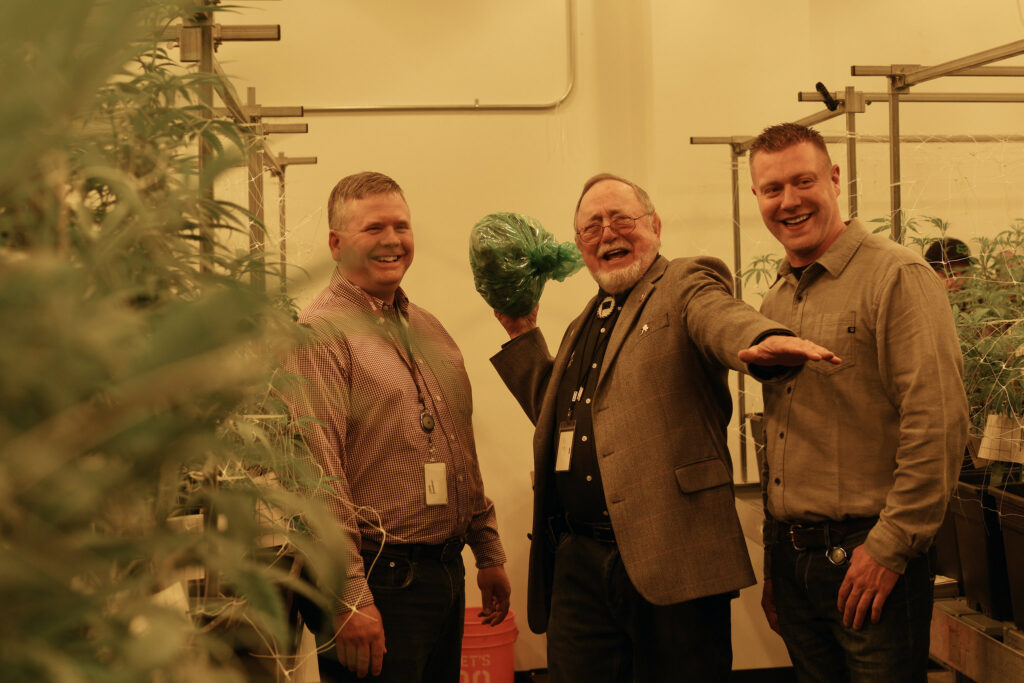 Via The Alaska Landmine.

Don Murphy, director of government relations for the Marijuana Leadership Campaign and a former Maryland state lawmaker, said Young’s “support for cannabis policy reform was based on his core beliefs in freedom and individual liberty and his general distrust of government.”

“Young wasn’t just a sideline supporter,” Murphy, who previously worked for the Marijuana Policy Project, said, noting that the congressman’s gun rights and cannabis bill “made most of the liberal leaning drug policy reform world uncomfortable and Young no doubt relished that position.”

Photo courtesy of The Alaska Landmine.