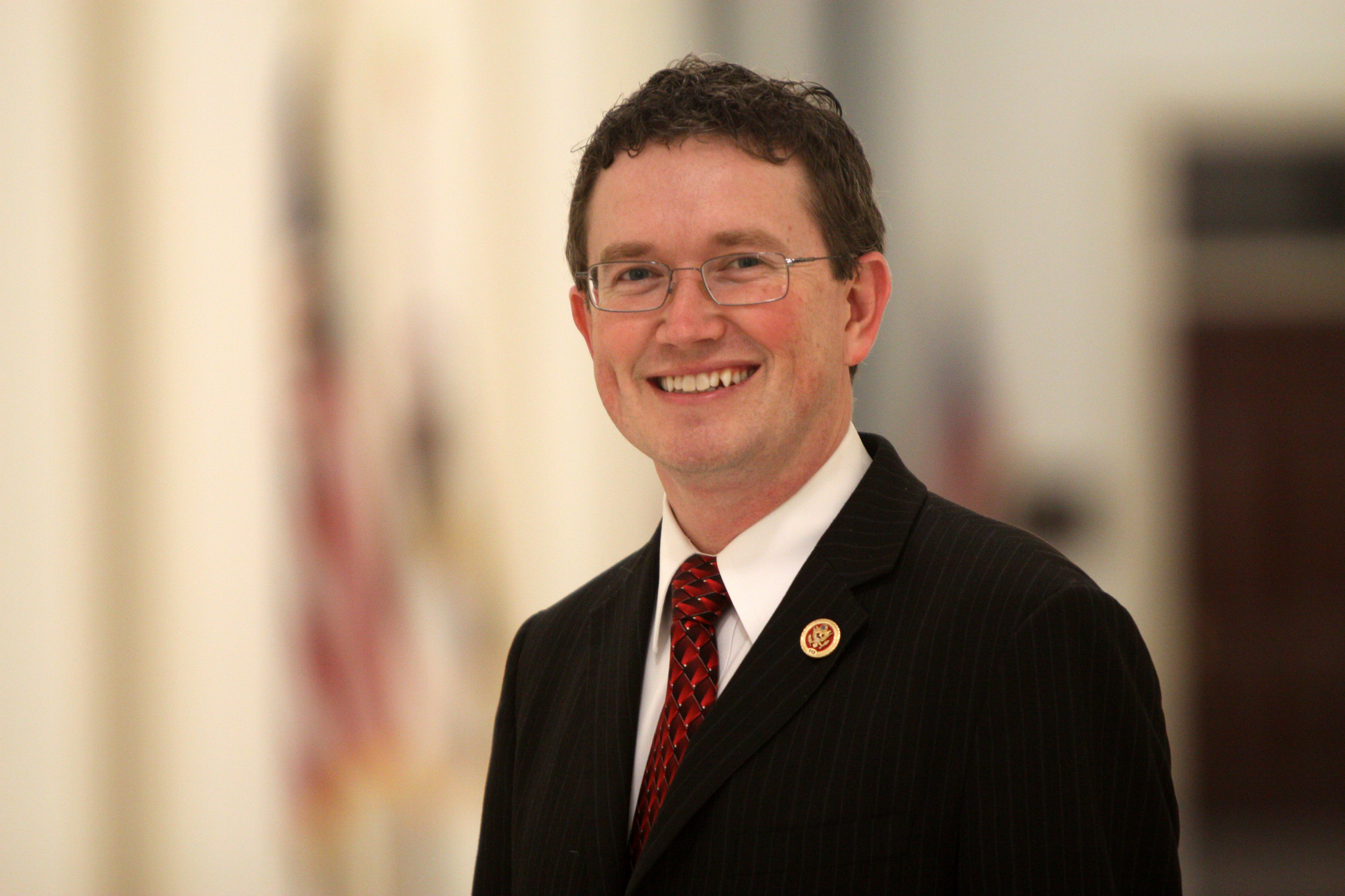 Republicans might have held on to a majority in the House in last month’s midterm elections if they’d passed a bill to end federal marijuana prohibition, according to one GOP member of Congress.

In a phone interview with Marijuana Moment this week, Rep. Thomas Massie (R-KY) said failing to vote on cannabis reform “was a huge missed opportunity for Republicans” and that states’ rights-focused marijuana legislation would’ve passed in the 115th Congress if GOP leaders hadn’t been so adamant about blocking such legislation from even being considered.

He also talked about hemp legalization and legislation he plans to introduce in the next Congress that would allow cannabis consumers to legally purchase firearms, something that is currently prohibited under federal law—even for medical marijuana patients in legalized states.

Marijuana Moment: Let’s start with your proposed legislation. For someone who isn’t familiar with the application process to buy a firearm, what’s the concern about the question asking applicants whether they use marijuana?

Thomas Massie: Contrary to some notions out there, almost everybody goes through a background check, and everybody who buys a firearm from a licensed [Federal Firearms License holder] has to fill out a form 4473. Well, the 4473 has a series of questions on it—it’s a series of questions where you basically self-report as to your eligibility to own a firearm. Form 4473 question 11e says “are you an unlawful user of or addicted to marijuana or any depressant, stimulant, narcotic drug or any other controlled substance?” Now, they added recently something else to this question, in bold. It says, “warning: the use or possession of marijuana remains unlawful under federal law regardless of whether it has been legalized or decriminalized for medical or recreational purposes in the state where you reside.”

What they’re doing there is trying to remove any ambiguity as to whether you think you can legally purchase a firearm if you use marijuana. Basically, they’re saying, for their purposes, any user of marijuana is an unlawful user of marijuana. And so if you use marijuana and you lie on this form, you’ve committed a crime. You’re lying to the federal government. And then if you complete the purchase—if your background check goes through and you buy a gun—you’ve committed another crime because you’re among the category of ineligible people.

MM: And you think we should do away with that question. Why?

TM: I think we’ve created millions of felons with this question. You can’t imagine that everybody in Colorado, who under Colorado state law is legally using marijuana, has never purchased a firearm. That would be completely illogical. Or vice versa. And by the way, whether you purchased it or whether it was a birthday gift, it doesn’t matter. Whether you fill out a form 4473 or not, it doesn’t matter. You’re still committing a crime by possessing a firearm or ammunition in your house if you use marijuana.

[The legislation] will take the question off the form, but my bill goes deeper than that. It makes it legal for marijuana users to also be gun owners, is what my bill does. So the question is, when people hear about the bill, “well, if you just take it off the form aren’t they still going to be criminals because you haven’t changed the underlying statute, which prevents a marijuana users from owning a gun?” But what my bill would do is fix the underlying statute. And I want to remind people that this is a problem for not just recreational users of marijuana, but medical marijuana recipients, according to the federal government, are felons if they possess a firearm. This is something that needs to be fixed.

MM: What turned you on to this issue?

MM: Have you found a Democratic co-sponsor for the bill since you tweeted about it in October?

I’ve drafted, but haven’t yet introduced, a bill to remove the marijuana question from ATF form 4473 — the question that requires anyone who uses marijuana (crime) to lie (crime) in order to purchase a gun (crime) from a gun dealer. Any Democrats who would support such a bill? https://t.co/5cAmsTPLoX

TM: I haven’t aggressively sought one, but when I sent the balloon up in October, I didn’t get any Democrat offices saying they want to jump on this bill. By the way, it might also be hard for some Republicans to get on this bill. I’m not convinced Jeff Sessions would be a fan of this bill.

MM: Any lawmakers you think might be inclined to join you?

TM: You know, we’re so close to the end of Congress that I have decided not to introduce it this Congress, but I will be looking for a co-sponsor next Congress, and I wouldn’t want to drop any names.

MM: The National Rifle Association (NRA) hasn’t weighed in on this particular issue. What do you make of that?

TM: I don’t know. The NRA gave me a ‘B’ not an ‘A’ because I got sideways with them when they supported a bill that I didn’t think followed due process, and so I came out against the bill called Fix NICS Act and they did robocalls against me in my district. The NRA has actually spent more money against me than they have for me. They sponsored my first opponent and then recently they ran robocalls against me. They’re not my gold standard for civil liberties, so I’m not really concerned with what they think.

MM: Shifting gears a bit, do you feel that outgoing Rep. Pete Sessions (R-TX), who consistently blocked votes on cannabis reform legislation as House Rules chair, has been on the wrong side of history?

TM: He’s the chairman of a committee that’s called the Speaker’s committee. The Rules committee is called the Speaker’s committee. He is not chairman there, he doesn’t get a chance to exercise—frankly, he can exercise his opinion, but when it comes to actual votes or activity in the committee, he has to do what the Speaker of the House wants him to do. So I wouldn’t say he’s on the right side or the wrong side, I would say he’s on the speaker’s side, and the speaker is on the wrong side.

MM: Are you hopeful that marijuana reform will be accomplished in the next Congress?

TM: I think it was a huge missed opportunity for Republicans. I think if we had passed a bill that left this issue up to the states, I think we might still be in the majority. There are, believe it or not, there are one-issue voters out there and this is their issue for some of those voters. For some of them, it’s a secondary or tertiary issue. But it still affects which party they decide to vote for. I’ve polled constituents in my district—it’s a very conservative district—and whether or not they’re for outright legalization of marijuana, 75 percent of Republicans and 75 percent of Democrats in my congressional district are in favor of leaving it up to the states. That’s the legislation we should’ve put on the floor. Frankly, it would’ve passed if it had gone on the floor, and we might still be in the majority. I think there could be movement in the next Congress on this issue.

MM: Can I get your reaction to the Senate passage of the Farm Bill as it concerns Senate Majority Leader Mitch McConnell’s provision to legalize hemp?

TM: Well, let’s go back to Pete Sessions then. There were three hemp amendments in the House offered for the Farm Bill from three Kentucky legislators. All of them were disallowed because a message had been sent from the Senate that this was not going to be happening in the House—that somebody wanted to make it happen in the Senate and we weren’t allowed to do it in the House. Now of course it’ll be in the conference committee, but… You probably don’t have time to put all that backstory in and I’m probably better off not telling you it, but anyways, I support the hemp provisions in the Farm Bill 100 percent.

MM: How are you planning to vote when it comes to House floor?

MM: Presumably not because of anything hemp-related.

What The Loss of Marijuana-Friendly Republicans Means For Federal Legalization