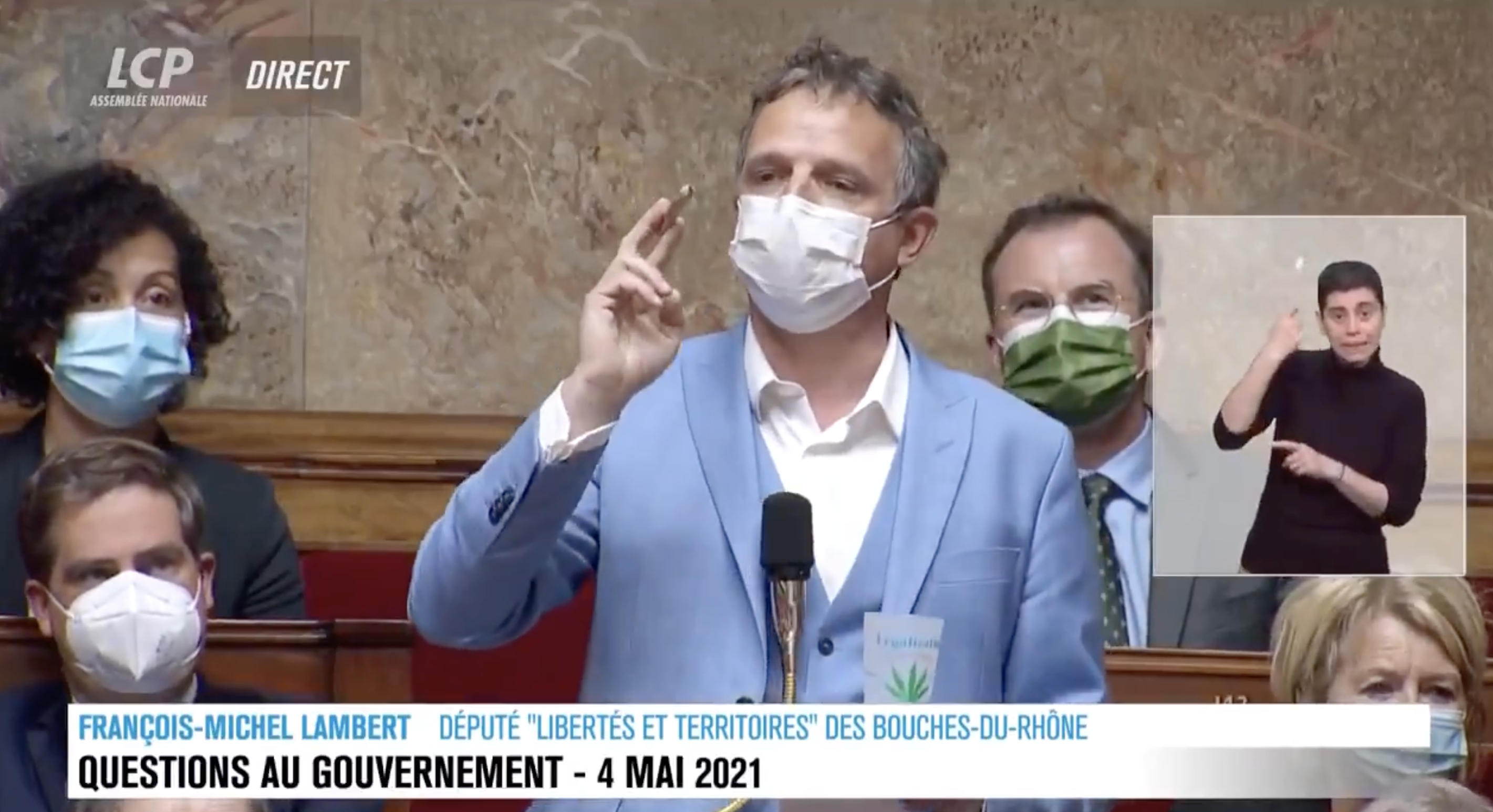 A French lawmaker caused a stir on Tuesday when he brandished a marijuana joint on the floor of the National Assembly, denouncing the criminalization of cannabis and calling for a policy change.

Deputy François-Michel Lambert said prohibition “is a total failure” and that “legalization would make it possible to dry up trafficking, create tax revenues and create jobs” before showcasing a cup with a cannabis leaf on it and then pulling a joint from it.

“Other countries have chosen to face the problem rather than the ostrich policy” of France, the deputy said.

The stunt came one day before a multi-party parliamentary report was released advocating for marijuana legalization.

Richard Ferrand, president of the National Assembly, immediately censured Lambert for displaying the joint and raised a point of order that means the lawmaker could face a financial penalty.

Things went over differently in Mexico when a lawmaker gifted a joint to Interior Ministry Secretary Olga Sánchez Cordero on the floor of the Chamber of Deputies in 2019.

A top administration official was gifted a cannabis plant by senator on the Senate floor, and she said she’d be making it a part of her personal garden.

Cannabis made another appearance in the Mexican legislature in August, when Sen. Jesusa Rodríguez of the MORENA party decorated her desk with a marijuana plant.

Back in France, Minister of the Interior Gerald Darmanin criticized the “little demagoguery” of Lamber’s joint display, according to a translation. He added that he didn’t believe that criminal organizations would shift to the legal market, where they would have to pay taxes to market marijuana.

“Get out of naivety, fight drugs and do not give up,” he said.

That’s not the advice that a parliamentary group gave in a report released on Wednesday.

“For fifty years, prohibition has adopted an unattainable objective, without ever having the means to achieve its ambitions,” the report states. “Regulated legalization is the best way to regain control and protect the French.”

“The state helplessly assists the trivialization of cannabis among young people and the deterioration of security despite a repressive French policy that is costly and excessively mobilizes the police,” it says.

The deputies also projected that taxing and regulating marijuana could generate €2 billion ($2.4 billion) in revenue for the country.

To draft the report, deputies analyzed the impacts of legalization in Canada and states across the U.S. They also interviewed more than 100 people, including magistrates, law enforcement, elected officials, substance misuse experts and public figures.

“We are proposing a real risk reduction policy and stopping waging war on the user in order to really reorient the police towards the fight against trafficking,” the group said.

That said, questions remain about the types of regulations that should be enacted if France were to legalize marijuana, and the deputies recommended a debate in the Assembly or possibly even a national referendum where voters could decide on the issue.

It stands to reason that, under President Emmanuel Macron, citizens would have to take the lead, as he’s ruled out legalization and said last month that the idea that marijuana is benign “is more than a lie.”

“Cognitively, the effects are disastrous. How many young people, because they start smoking in college, completely drop out of the school system and ruin their chances?” he said. “And I’m not even talking about the effects of sliding to harder drugs.”

Instead of pursuing reform, Macron said the government is shifting “into high gear” when it comes to enforcement action against drug traffickers.

“Eradicating them by all means has become the mother of battles, since drugs innervate certain separatist networks but also everyday delinquency, including in small towns so far spared,” he said. “Leaving no respite for drug traffickers is to reduce delinquency everywhere.”