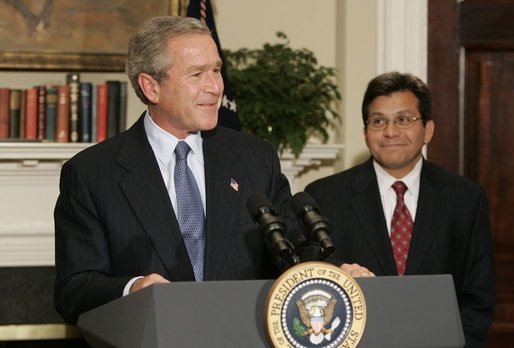 Current U.S. Attorney General Jeff Sessions would be wrong to crack down on state marijuana laws, one of his Republican predecessors says.

“To prosecute an act that is otherwise lawful under state law, one could make the argument [that] as a matter of policy, we’ve got other priorities we ought to be spending our resources on,” Alberto Gonzales, who served as attorney general during President George W. Bush’s administration, said in an interview with Newsweek.

“With respect to everything else going on in the U.S., this is pretty low priority,” he added.

And what’s more, cracking down on seriously ill people who rely on medical cannabis and their providers who are following state laws would look bad, Gonzales warned his successor.

“The optics just aren’t very good, quite frankly,” he said.

As a U.S. senator, Sessions was long one of Congress’s most vocal opponents of legalization, saying last year that “good people don’t smoke marijuana.”

But while deploying threatening and concerning comments about cannabis policy from time to time as attorney general, he hasn’t moved to rescind Obama-era guidance that generally allows states to implement their own marijuana laws without federal interference. At least not yet.

Last week, at a House hearing, Sessions testified that the previous administration’s approach remains in effect for now.

Gonzales, in the Newsweek interview, said that Sessions would probably clear any big cannabis moves with the White House first.

On the campaign trail, President Trump repeatedly pledged to respect state marijuana laws, going so far as to say he personally knows people who benefit from medical cannabis.

Despite Gonzales’s apparent supporting for letting states enact their own marijuana polices today, his Justice Department argued before the U.S. Supreme Court in 2004 that it had the right to punish medical cannabis patients who were following local policies.