The number of financial institutions servicing the marijuana industry declined again over the last fiscal quarter, new federal data shows, though there seem to be multiple factors behind that trend.

The Financial Crimes Enforcement Network (FinCEN) reported last week that 695 banks and credit unions were working with state-legal cannabis businesses as of the end of June. That’s down from 710 in the previous quarter, which itself represented a dip from prior numbers.

A quick glance at the new government chart might make it seem that banks are significantly less willing to take on marijuana accounts of late. But it should be noted that FinCEN, which is part of the Treasury Department, stopped including hemp-only businesses in their quarterly reports since the crop was federally legalized under the 2018 Farm Bill—which accounts for at least part of the dip as compared to prior figures that counted hemp-focused accounts.

So what’s behind the more recent downward trend that continues even past the hemp-related accounting switch?

According to the agency, “the COVID-19 pandemic may be adding to this apparent decline” and some marijuana companies “have likely been closed during this time period, due to government imposed quarantine restrictions.”

That said, most states allowed cannabis companies to continue to operate as essential services amid the coronavirus pandemic—and states like Illinois are seeing record sales in recent months.

Another potential reason could be that banks have been understaffed, causing delays in filing required suspicious activity reports (SAR) for marijuana businesses. 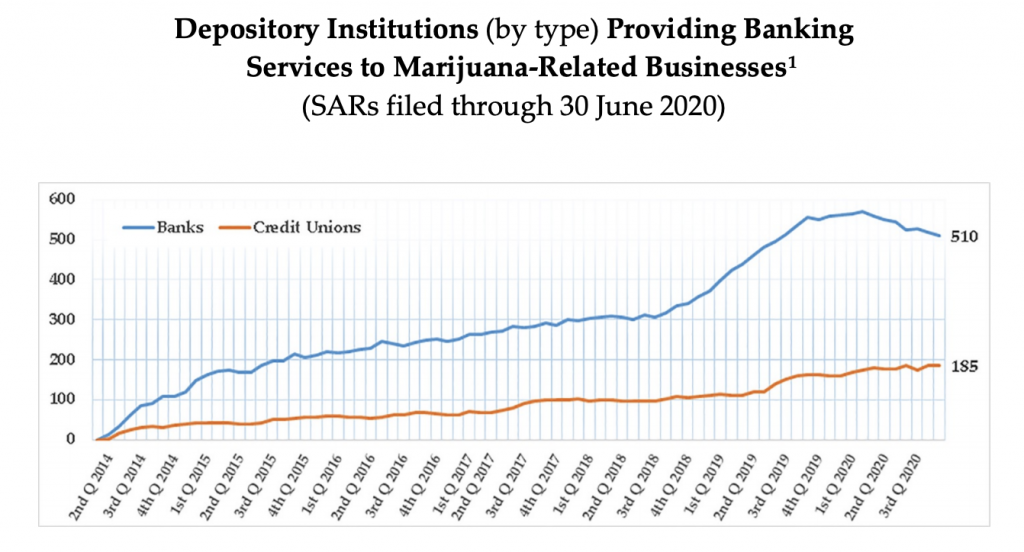 Under FinCEN guidance issued by the Obama administration in 2014 that remains in effect, banks and credit unions are required to submit SARs if they elect to provide financial services to marijuana businesses. In the years since, the number of depositories taking on marijuana clients has gradually increased—until this more recent downward trend.

A group of Democratic state treasurers last month renewed its call for the passage of banking protections as part of the next coronavirus package in the face of these attacks.

Meanwhile, the standalone Secure and Fair Enforcement (SAFE) Banking Act cleared the House last year but has sat in the Senate Banking Committee in the months since, without a clear timeline for action.

Separately, a much more comprehensive piece of reform to federally legalize cannabis—the Marijuana Opportunity, Reinvestment and Expungement (MORE) Act—is set to receive a floor vote later this month. Removing marijuana from the Controlled Substances Act would quickly resolve uncertainty in the banking sector as to whether institutions can work with businesses in the industry.

These developments could lend themselves to higher numbers of banks and credit unions servicing the market down the line, but that’s yet to be seen.

The National Credit Union Administration issued a memo in June explaining issues related to providing financial services to hemp businesses and clarifying that such activity is lawful since the crop was legalized.