A bill set to go before the U.S. House of Representatives this week to federally legalize and tax marijuana would add billions in revenues and reduce prison costs over the next decade, according to a report released by the Congressional Budget Office (CBO) on Wednesday.

Overall, the office said that it expects the proposed federal taxes included in the Marijuana Opportunity, Reinvestment and Expungement (MORE) Act to bring in $8.1 billion in revenue from 2022-2031.

CBO also look at the impacts of legalization on the prison system.

“H.R. 3617 would federally decriminalize cannabis (marijuana), expunge the records of people convicted of federal cannabis offenses, and require resentencing of some federal prisoners,” the report says. “As a result, CBO estimates, thousands of current inmates would be released earlier than under current law. In the future, decriminalization also would reduce the number of people in federal prisons and the amount of time they serve.”

It estimated that the policy chance would mean that time served in federal prison would be collectively reduced by 37,000 person-years for current and future inmates. CBO predicted that the Bureau of Prisons would save about $800 million because there would be fewer people in prison amid sentence reductions. 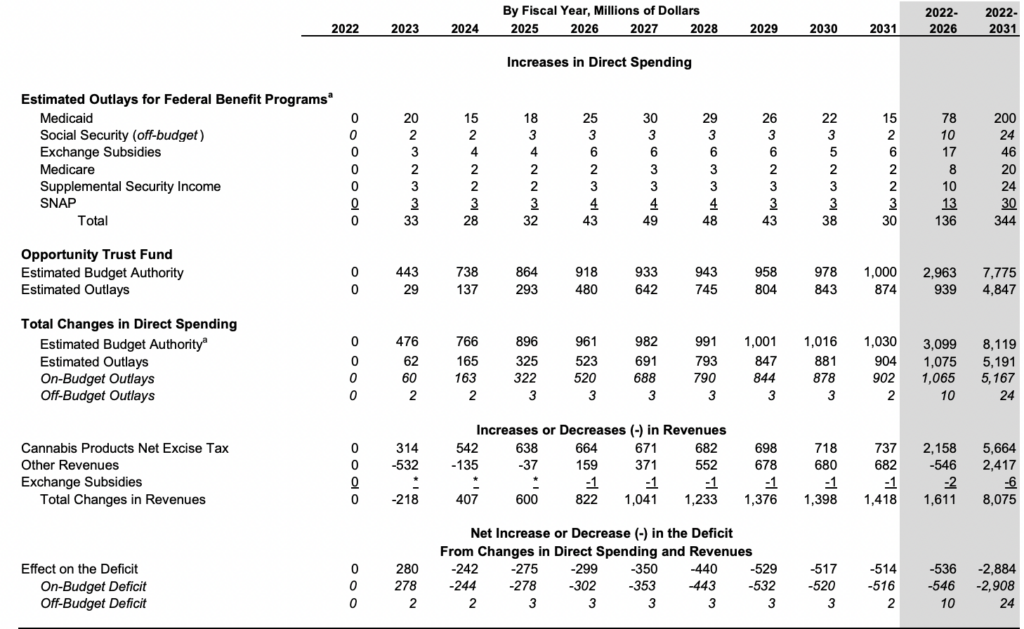 By restoring the rights of people who have been criminalized over cannabis, the office said there would be increased direct spending on federal benefits, amounting to $344 million over the next decade as formerly incarcerated people become eligible for various programs.

Revenue from cannabis taxes, meanwhile, would be partially offset by allowing marijuana businesses to make tax deductions and claim credits that they’re currently prohibited from doing under a tax code known as 280E.

CBO further addresses money that would be appropriated through the Opportunity Trust Fund that would be established under the legislation. It estimates that about $7.8 billion would go to the fund over the next decade. The Justice Department is expected to spend roughly $3.4 billion “to provide job training and legal aid, among other services, to people harmed by what was termed the war on drugs.”

Additionally, CBO estimates that the federal Small Business Administration will spend $1.4 billion “in grants to states and localities to make business loans to related small businesses and to develop cannabis-licensing rules.”

But curiously, while the MORE Act has not significantly  hanged since a prior version passed the House last session, these figures for projected savings, revenue and reduced time served by people in prison are notable lower compared to CBO’s 2020 score of the earlier legislation.

The last score estimated a gain of about $13.7 billion from marijuana tax revenue, for example. And it said at the time that there would be a reduction of 73,000 person-years for current and future inmates.

In any case, the CBO report comes just as the House prepares to vote on ending prohibition for the second time in history. It passed in 2020, but stalled in the Senate. This session, it cleared the House Judiciary Committee, which is chaired by the bill’s sponsor Rep. Jerrold Nadler (D-NY).

While the bill hasn’t been substantively changed since it last went to the floor, the House Rules Committee on Wednesday did make in order several proposed amendments, while rejecting others that were meant to impose additional restrictions on the reform.

The final rule agreed to in committee will be up for debate on the floor on Thursday. Then a vote on the legislation is expected on Friday.

Following the announcement that the House would again be voting on the MORE Act, the majority and minority leaders of the Judiciary Committee then released a nearly 500-page report on what the legislation would accomplish and outlining arguments for and against the reform.

The move to hold another vote on the cannabis legalization bill comes weeks after congressional Democrats held a closed-to-press session at a party retreat that included a panel that largely centered on the reform legislation.

Insiders expect the MORE Act to pass on the floor this week, though it will likely clear the chamber in largely partisan fashion. A spokesperson for Rep. Matt Gaetz (R), the sole GOP cosponsor of the bill, told Marijuana Moment that he would vote in favor of the legislation again. He was one of five Republican members to vote “yes” on the MORE Act last session.

However, a pro-legalization GOP congressman who serves as co-chair of the Congressional Cannabis Caucus, Rep. Dave Joyce (R), is set to vote against it. His office circulated a letter to other Republican offices ahead of the Rules Committee meeting offering resources on navigating cannabis policy issues but expressing opposition to the MORE Act as drafted.

Joyce separately sent a letter to Nadler last month, expressing his willingness to work with the bill sponsor on revisions to build bipartisan support.

Also in Congress, a separate bill to tax and regulate marijuana is also in play this session. Rep. Nancy Mace (R-SC) is sponsoring that legislation, and she said in a recent interview that she’s received assurances from Democratic leaders that her States Reform Act will receive a hearing following the MORE Act floor vote.

Meanwhile, on the same day that it was announced that the MORE Act would be heading to the floor again, the Senate unanimously approved a bipartisan bill meant to promote research into marijuana, in part by streamlining the application process for researchers who want to study the plant and to encourage the Food and Drug Administration (FDA) to develop cannabis-derived medicines.

Congressional researchers separately released a report recently that details the challenges posed by ongoing federal prohibition and the options that lawmakers have available to address them.