Due to the loss of several House seats, the party is barely holding onto its majority there, and it will have to wait for the outcome of two Senate runoffs in Georgia to see if it can reclaim control of the other chamber. There was a narrative among some centrist members that moving too far to the left on issues could jeopardize the election, but the results and the new analysis seem to contradict that argument.

Data For Progress, Justice Democrats, Sunrise Movement and New Deal Strategies teamed up and polled 1,375 likely voters in 13 congressional districts where Democrats either lost or underperformed. They concluded that “progressive policies like raising the federal minimum wage to $15 an hour, legalizing marijuana, and fighting for an expansive coronavirus relief package are popular among swing district voters.”

NEW: Our memo today with @justicedems, @sunrisemvmt, and New Deal Strategies of swing districts Democrats lost — and how progressive policies like a $15 minimum wage, marijuana reform, and coronavirus relief can show Democrats the path forward.https://t.co/pJTlephHzR

Asked whether they support legalizing cannabis for adult use, 57 percent of respondents in the swing districts said they did. That includes 71 percent of Democrats, 63 percent of independents and 38 percent of Republicans. 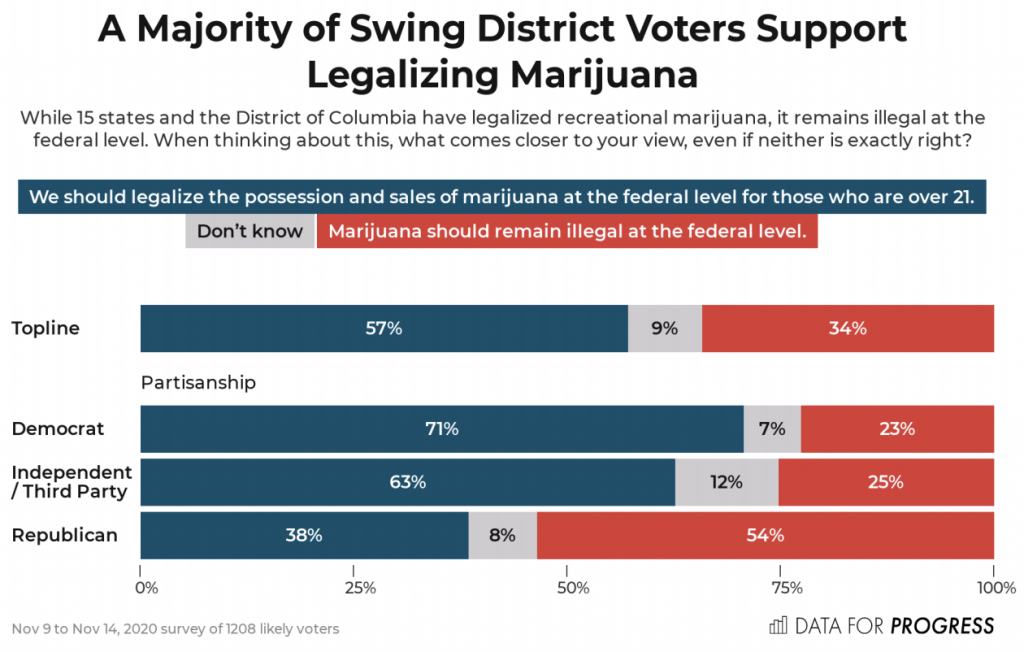 What’s more, “marijuana legalization—a major progressive proposal—appears to additionally be a popular persuasion policy for independent voters” whose support could make or break tight races. And while only just over one-third of Republican voters said they favor the policy change in this survey, that is still an important figure, the groups said.

Coronavirus relief, raising the minimum wage and legalizing cannabis are policies that “have the potential to bring tangible, material benefits to people’s lives,” and so they’re broadly attractive to voters. Further, legalization “has proven to supplement state budgets, which are currently facing historic cuts to essential services due to the economic impact of coronavirus.”

“As Democrats try to figure out what went wrong down-ballot, they should keep these popular and progressive policies in mind,” the analysis found.

Yet two months before the election, moderate Democrats pleaded with House leadership to postpone a vote on a bill to federally legalize marijuana, arguing that it would be bad optics to advance the reform before passing additional coronavirus relief. But that strategic political thinking is challenged by this and other recent polling that demonstrates just how popular the issue is, especially among Democrats. What’s more, voters in several conservative states approved far-reaching cannabis ballot measures on the same day that many of those Democratic moderates lost their reelection bids.

The Marijuana Opportunity, Reinvestment and Expungement (MORE) Act did get rescheduled and was approved in the House last week. And according to a Morning Consult-Politico released on Wednesday, the marijuana descheduling legislation enjoys majority support across political ideologies. Fifty-one percent of Republicans said they’re in favor of the broad reform.

A separate poll released on Tuesday found that seven in ten Americans support clearing the records of people with non-violent marijuana convictions.

The findings for where Americans stands on expungements—which is part of the MORE Act—is roughly equivalent to national support for broader marijuana legalization. A poll published by Gallup last month found that 68 percent of respondents were in favor of legalizing cannabis for adult use, which the firm said is its “highest reading” since it started polling voters on the issue in 1969.

The release of these survey results come shortly after voters in five states approved initiatives to legalize cannabis for medical or recreational purposes.

Despite the overwhelming support for the policy change among Democrats, Biden has so far only backed more modest reforms such as decriminalizing possession and expunging prior cannabis convictions.

But he may feel pressure to adopt a more progressive stance given the recent passage of the MORE Act and the wave of poll results showing how popular the policy is with voters across the political spectrum.