The new figures released on Thursday by the Colorado Department of Revenue (DOR) also showed that the state took in $423,486,053 in tax revenue from medical and adult-use marijuana sales in 2021.

The prior sales record occurred in 2020, when Colorado saw about $2.19 billion in marijuana purchases. 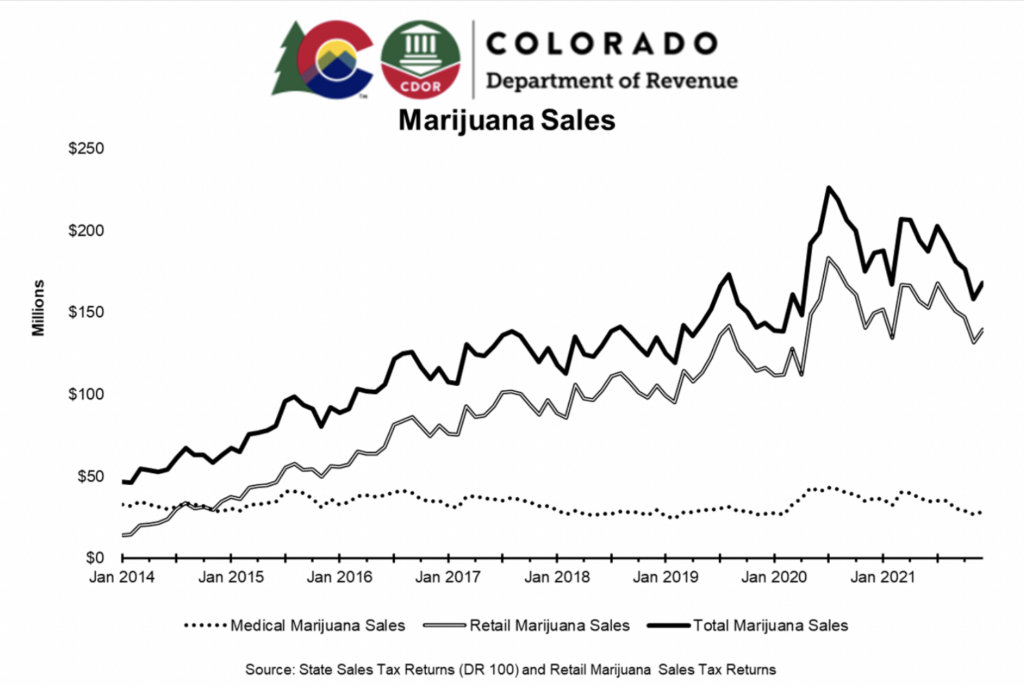 For example, Massachusetts is officially collecting more tax revenue from marijuana than alcohol, state data released last month shows. As of December 2021, the state took in $51.3 million from alcohol taxes and $74.2 million from cannabis at the halfway point of the fiscal year.

Overall, Massachusetts has seen $2.54 billion in adult-use marijuana purchases since the market came online in November 2018. Regulators first reported that the state achieved the $2 billion sales milestone in September.

Illinois also saw cannabis taxes beat out booze for the first time last year, with the state collecting about $100 million more from adult-use marijuana than alcohol during 2021.

In Arizona, officials reported last month that the state saw $1.23 billion in cannabis purchases in the first 11 months of 2021.

States that have legalized marijuana have collectively garnered more than $10 billion in cannabis tax revenue since the first licensed sales started in 2014, according to a report released by the Marijuana Policy Project (MPP) last month.

And in those adult-use states, regulators are doing what they can to ensure that the tax dollars are effectively invested.

California officials announced in June that they were awarding about $29 million in grants funded by marijuana tax revenue to 58 nonprofit organizations, with the intent of righting the wrongs of the war on drugs. The state collected about $817 million in adult-use marijuana tax revenue during the 2020-2021 fiscal year, state officials estimated last summer. That’s 55 percent more cannabis earnings for state coffers than was generated in the prior fiscal year.