Colorado officials announced on Monday that the state has achieved a “wildly important goal” of increasing diversity in the legal marijuana industry—but the data shows there’s still a way to go before cannabis business ownership is on par with the state’s population demographics.

Nearly 17 percent of the state’s cannabis businesses are now minority-owned as of January 1, the Marijuana Enforcement Division (MED) reported. Colorado had set a goal of at least 16.8 percent minority ownership in the cannabis sector by June 30, 2022, and that’s already been narrowly exceeded by the beginning of the year.

When data on licensee demographics started to be collected in July 2021, there was 15.2 percent minority ownership in the marijuana market. Now it’s up to 16.8 percent.

As of January 1, the state has also approved 50 social equity licenses for communities disproportionately impacted by prohibition.

As one of the first states to legalize marijuana for adult use, there’s been significant pressure on Colorado to ensure that the industry is equitable, benefitting those who have been most impacted under criminalization.

“If one of the most mature markets can make clear progress, it’s not too late for any market. And although there’s always more to go—we should all be aiming for proportional representation in ownership at the very least—Colorado is setting and reaching reasonable goals,” she said. “It’s good for transparency and it’s good for morale, and having more data on what’s working at the state level is valuable to inform federal policy.”

As part of Colorado’s commitment to equity, diversity, and inclusion, Social Equity Licenses are one of the many ways our Marijuana Enforcement Division is supporting diversity initiatives in the cannabis industry. To learn more, visit https://t.co/ye7c6WQJOZ @ColoradoEcoDevo pic.twitter.com/NljRlGtcuU

There’s also a significant disparity when it comes to gender and marijuana licensing. MED’s report says that there are 1,535 men who own a marijuana business, compared to just 350 women.

And with respect to license type, white people have a notably more expansive portfolio compared to other races. 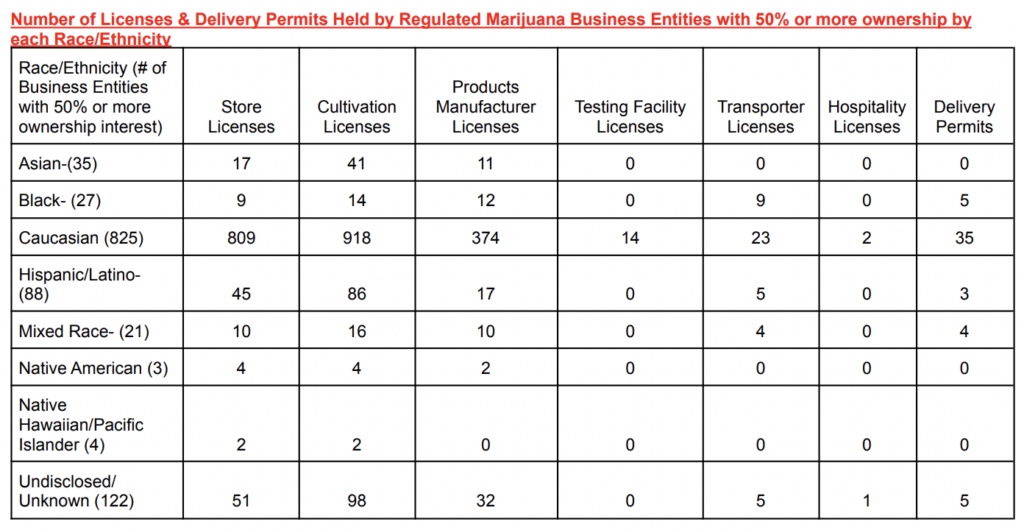 Colorado Gov. Jared Polis (D) is also working to right the wrongs of prohibition outside of licensing. For example, last month he granted 1,351 pardons for convictions of possession of two ounces or less of marijuana.

That move focused on people who were made eligible for relief under a new law that increased the legal cannabis possession limit for adults in the state, which Polis signed in May. At the time, he directed state law enforcement to identify people with prior convictions for amounts under the new, two-ounce limit.

Polis signed an executive order in 2020 that granted clemency to almost 3,000 people convicted of possessing one ounce or less of marijuana. And while earlier legislation that enabled him to do that in an expedited way applied to possession cases involving up to two ounces, his office declined to pardon those with more than one ounce on their records because that amount violated the existing state law.

As the state works to increase diversity in the marijuana industry, it’s also collecting significant tax revenue from cannabis sales.

Nearly $500 million of cannabis tax revenue in Colorado has supported the state’s public school system so far, according to a report from the Marijuana Policy Project.

Governors Across The U.S. Tout Marijuana Reform Progress In State Of The State Speeches And Budgets