Regulators at the U.S. Department of Agriculture (USDA) have given the go-ahead to Colorado’s hemp management plan, which will govern the state’s sizable industry for the crop and ensure that businesses there continue to operate in compliance with federal law.

Gov. Jared Polis (D) and state Agriculture Commissioner Kate Greenberg announced the plan’s approval at a media event held at a hemp farm on Tuesday morning. “Colorado is the undisputed leader in the cannabis industry, and our hemp plan is a model for the country,” the governor boasted in a statement, which also included praise from musician and cannabis fan Willie Nelson.

Greenberg said the Colorado Department of Agriculture (CDA) plan “gives the greatest flexibility to Colorado’s hemp producers while ensuring requirements are in place in accordance with federal standards.”

“With this new plan in place, we are creating a huge number of new opportunities to further hemp production and uses here in Colorado, from paper to plastic substitutes, fabric, hempcrete, detergents, soaps, insulation, biofuel and so much more,” she said. “This plan approval will pave the way for a greater and more diverse hemp industry here in Colorado.”

Legal hemp cultivation has been happening in Colorado since 2014, when the state launched an early hemp pilot program under a provision in that year’s federal Farm Bill. Four years later, the 2018 Farm Bill more broadly federally legalized hemp but required that states send individual regulatory plans to USDA for approval.

“That was really a critical piece,” Polis said at Tuesday’s press event Tuesday, “and it allowed us to develop was was approved today: a new framework that meets the needs of Colorado farmers and producers, breaking down ridiculous barriers that got in the way and drove the cost up of hemp production.” 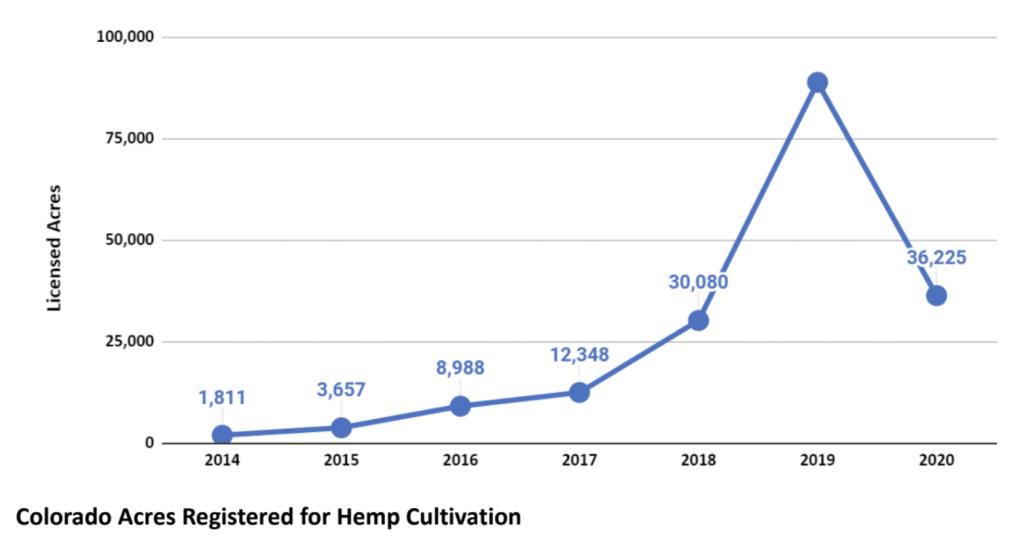 Colorado officials submitted their latest hemp management plan to USDA in June, following nearly a year and a half of interactions with the federal regulatory agency as it developed its final rule on hemp, released in January of this year. Their feedback on early drafts of the regulations led to changes by the feds.

When USDA issued the final rule, the agency noted in a footnote that feedback from Polis, Greenberg and other Colorado officials helped identify logistical challenges to widespread lab testing of hemp, which is forbidden from containing more than 0.3 percent THC. Under a draft rule, helped the agency set rules regarding testing hemp products for THC. Specifically, the Colorado leaders noted that a requirement to dispose of hemp that tested over the federal THC limit could cost the state $842.6 million.

In response, USDA changed to proposed rules to allow hemp growers to attempt to remove the excess THC “from non-compliant crops in order to stave off financial risk associated with the loss of investment in their hemp crop.”

“We leaped into action and we submitted comments to the interim final rules two different times,” Polis said on Tuesday. “I’m proud to say we were able to partner with the USDA across two different administrations to address our differences.”

The state’s hemp program has also launched a certified seed program, diversified supply chains and is establishing a center to help direct research, outreach and educational efforts for the state’s hemp industry.

While many states and federally recognized Indian tribes have submitted their own hemp management plans, a number of states are still operating under the earlier pilot program, which has been repeatedly extended and requires less federal oversight than the new USDA-approved programs. That program, intended to be temporary, would be renewed again under pending legislation that has passed the House and is pending in the Senate.

Registered hemp cultivation in Colorado quickly picked up speed after the market launched in 2014. With the exception of a sharp decline between 2019 and 2020, the amount of space registered for indoor or outdoor hemp cultivation has consistently grown since the program began.

The state’s press release included a congratulatory statement from musician and outspoken marijuana fan Willie Nelson. “Colorado should be proud of leading the charge for the hemp industry,” he said. “There are many ways that this crop can benefit both small, family farmers and Americans in their everyday lives. From textiles and feed to fuel and plastics, hemp is the answer.”

“I’m proud to report that we’re well on our way, Willie,” Polis replied at the event. “We boast some of the highest numbers in production in the country regarding plant counts—26,250 aces, 13 million square feet of indoor plants. And that’s just how far we’ve come without this plan in place.”

Today we announced Colorado’s State Hemp Management Plan — and it has the approval of the one and only @WillieNelson! Colorado is the undisputed leader in the cannabis industry, and our hemp plan is a model for the country.

Colorado has also helped lead the way on legalizing adult-use cannabis. Officials last month announced the launch of a new office to provide economic support for the state’s marijuana industry.

The agency, which was created as part of a bill signed into law in March, is being funded by cannabis tax revenue. It will focus on creating “new economic development opportunities, local job creation, and community growth for the diverse population across Colorado.”

Polis had initially asked lawmakers back in January to create a new a new cannabis advancement program as part of his budget proposal.

Beyond this program, the state has worked to achieve equity and repair the harms of prohibition in other ways.

For example, Polis signed a bill in May to double the marijuana possession limit for adults in the state—and he directed state law enforcement to identify people with prior convictions for the new limit who he may be able to pardon.

The governor signed an executive order last year that granted clemency to almost 3,000 people convicted of possessing one ounce or less of marijuana.