Joe Biden’s presidential campaign is leaning into his marijuana decriminalization promise, urging people to create social media posts about why they’re voting for him using a variety of pre-made templates, including one focusing on cannabis reform.

“I’m voting to decriminalize marijuana use,” one of the 17 templates on the Biden-Harris campaign site says. People can upload a photo of themselves and have it merged into the frame that touts the policy pledge.

In a bid to get out the vote on Election Day, the campaign seemed to select issues that poll best among young people. But consistent with Biden’s platform, they chose to go with simple “decriminalization” rather than full “legalization,” despite the fact that 81 percent of Americans aged 18-29 support the broader policy change according to a Gallup poll released last year. 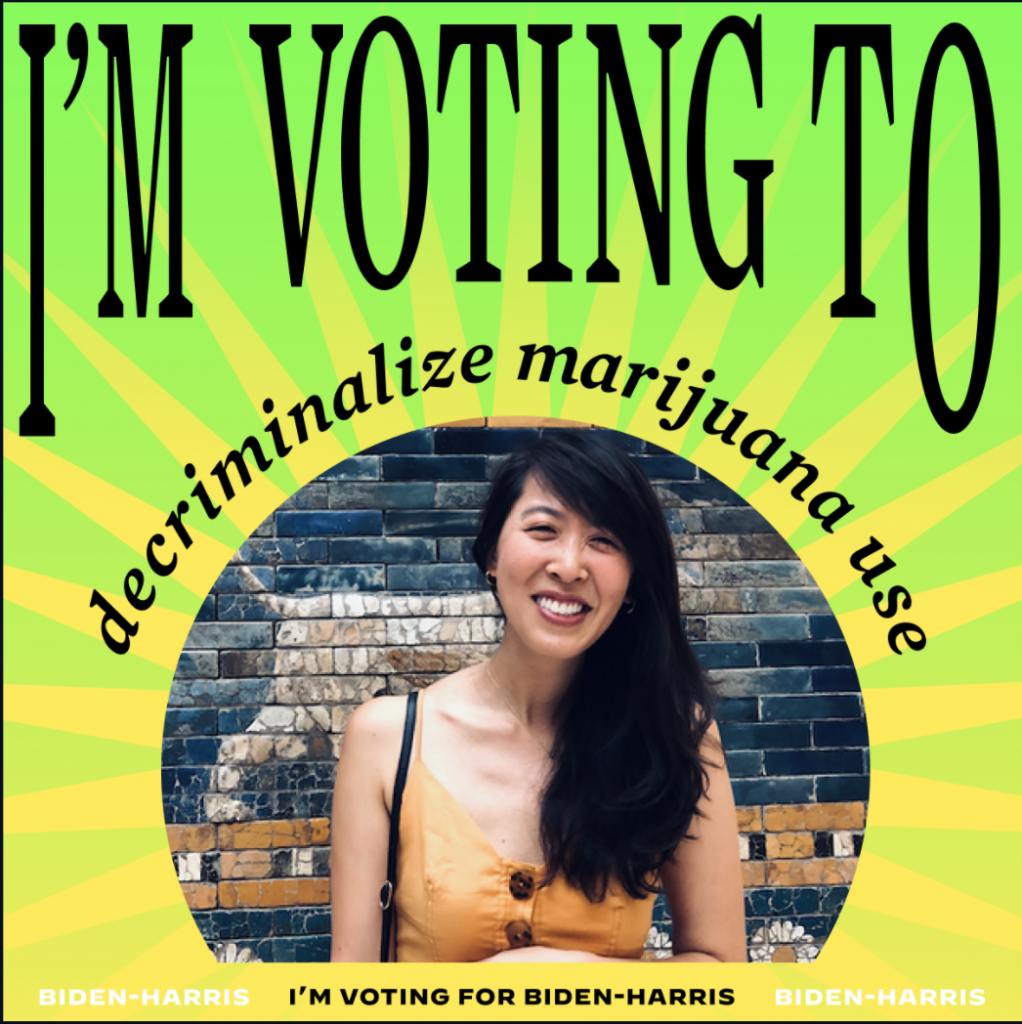 Via Biden For President.

The former vice president has attempted to shed his image as the author of punitive anti-drug legislation during his time in the Senate, but he’s so far been unwilling to embrace legalization. Instead, he’s talked regularly about the need to remove criminal penalties for cannabis possession and expunge prior marijuana convictions.

He’s also emphasized that nobody should go to jail for low-level drug crimes and should instead be forced into treatment—a proposal that many advocates oppose because it’s still viewed as a form of unnecessary criminalization that can lead to incarceration if certain drug court requirements aren’t met.

In any case, the social media templates make clear that the campaign recognizes the popularity of cannabis reform. And while President Trump has presented himself as the criminal justice reform candidate and has voiced support for letting states set their own cannabis laws when asked about the issue, he’s declined to make any specific policy pledges related to marijuana, leaving the door open for Biden to own the issue, albeit in a relatively moderate form compared to what a supermajority of Democrats—including most of his former primary campaign rivals—want.

Other templates promote causes such as racial justice, LBGTQ+ equality, protecting the environment and immigrants’ rights. The tool was launched on Sunday.

From climate change to racial justice — there is so much on the line in this election. So my team put together a generator to help you show your friends and family what you’re voting for. Head to https://t.co/kdc4aQ0d2D to try it out.

Biden was recently pressed on his Senate record as it concerns policies that negatively impacted communities of color, including those contained in the 1994 Crime Bill he proudly authored. While the candidate said it was actually separate drug policies that did the most harm, he conceded in an interview last week that it was a “mistake” to support them and argued that, unlike Trump, he’s willing to own up to mistakes.

Beyond decriminalization and expungements, Biden has also backed legalizing medical cannabis, modestly rescheduling the plant under federal law and letting states set their own policies without intervention.

His running mate, Sen. Kamala Harris (D-CA), said recently that she has a “deal” with him to candidly share her perspective on a range of progressive policies he currently opposes, including legalizing cannabis. However, despite sponsoring a bill to federally legalize marijuana in the Senate, she has not committed to proactively pushing him to adopt the broader pro-reform position.

In another interview released last month, Harris said she and Biden “have a commitment to decriminalizing marijuana and expunging the records of people who have been convicted of marijuana offenses.”

“When you look at the awful war on drugs and the disproportionate impact it had on black men and creating then criminal records that have deprived people of access to jobs and housing and basic benefits,” she said.

Biden, for his part, also conceded at a televised town hall meeting last month that parts of his criminal justice and drug policy record were a “mistake,” though he attempted to place much of the blame on prosecutors at the state, rather than federal, level.

Illinois Marijuana Stores Have Now Sold More Than Half A Billion Dollars Worth Of Cannabis Products, State Announces