While youth in Pennsylvania are more accepting towards marijuana following its legalization for medical use in the state, they are not consuming it more than before, researchers have found.

A supposed negative impact on children is one of the most common arguments deployed by prohibitionist activists and anti-legalization groups. And it is one for which there is little evidence.

The new study is the latest in a string of reports that have found that marijuana legalization, be it for medical or recreational use, is having a negligible impact on whether juveniles will use the drug.

“While what we found shows that attitudes towards marijuana are becoming more accepting, or normalized, use has not increased,” Philip Massey, an assistant professor at Drexel University’s Dornsife School of Public Health and the report’s lead author, said in a press release. “This is important because many people fear that legalizing marijuana will lead to greater use and potential abuse.”

“It doesn’t appear to be affecting youth use.”

Pennsylvania legalized medical cannabis in 2016, and the first dispensaries opened for patients earlier this year.

As in other states and with federal data, most “official” rates of youth drug use are based on surveys in which teens self-report what drugs they use and at what frequency.

Researchers looked at what “youths”—defined as people between the ages of 12 and 17—thought of marijuana based on survey results between 2013 and 2017.

Over that period of time, young people who “had at least one best friend smoke marijuana over the last year grew by only one percentage point, from 30.7 to just 31.9,” according to data released Wednesday from the Pennsylvania State Epidemiological Outcomes Workgroup. 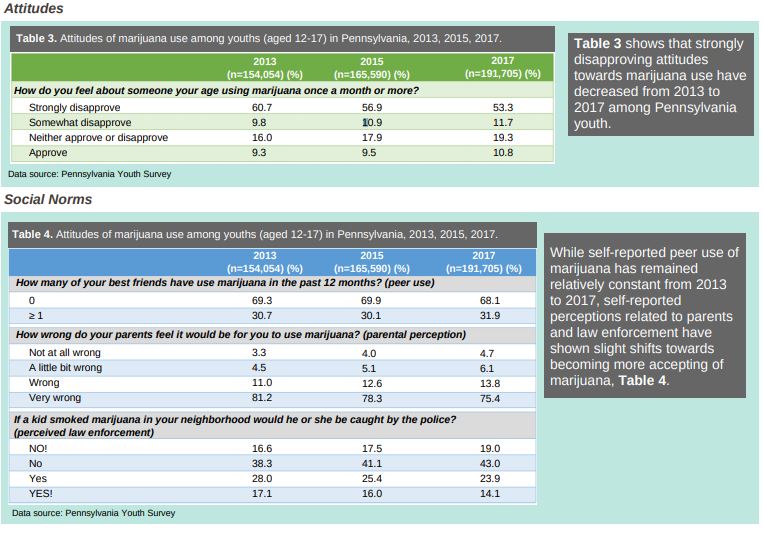 While use rates have changed only slightly, attitudes have shifted much more significantly.

The percentage of youths who said they “would never try” marijuana decreased over that period of time from 71 percent to 62.2 percent.

And the percentage of youths who said that they “strongly disapprove” of “someone your age using marijuana once a month or more” decreased from 60.7 percent to 53.3 percent.

At least part of this may be attributable to parents. According to Gallup, support for marijuana legalization among adults is at an all-time high. According to Pennsylvania adolescents, the percentage of parents who believe marijuana use is “very wrong” decreased from 81.2 percent to 75.4 percent.

At the same time, this shift in attitudes hasn’t changed the prohibitive atmosphere around the drug—in fact, according to teens, marijuana is harder than ever to get.

Restrictions on youth access are baked into nearly every marijuana law in the United States, and providers face stiff penalties for violations.

During a recent sting operation in Oregon, where underage operatives were sent into cannabis dispensaries and liquor stores in an attempt to buy age-restricted products in violation of the law, alcohol sellers proved more likely to sell to youths than marijuana retails did.

Another factor that may be affecting youth attitudes is a shift in criminal-justice system practices. Philadelphia decriminalized marijuana in 2013, and Pittsburgh followed suit in 2016. Juvenile arrest rates decreased from 112.3 per 100,000 in 2013 to 79.6 in 2016.

According to Massey, this “preliminary data tell me that the people who need marijuana for medical purposes are the ones benefiting from this law.”