Texans’ support for legalizing marijuana has grown significantly over the past decade, according to a new poll.

Sixty percent of state voters now back making cannabis legal “for any use,” the University of Texas and Texas Tribune survey found. That compares to just 42 percent who said the same back in 2010. 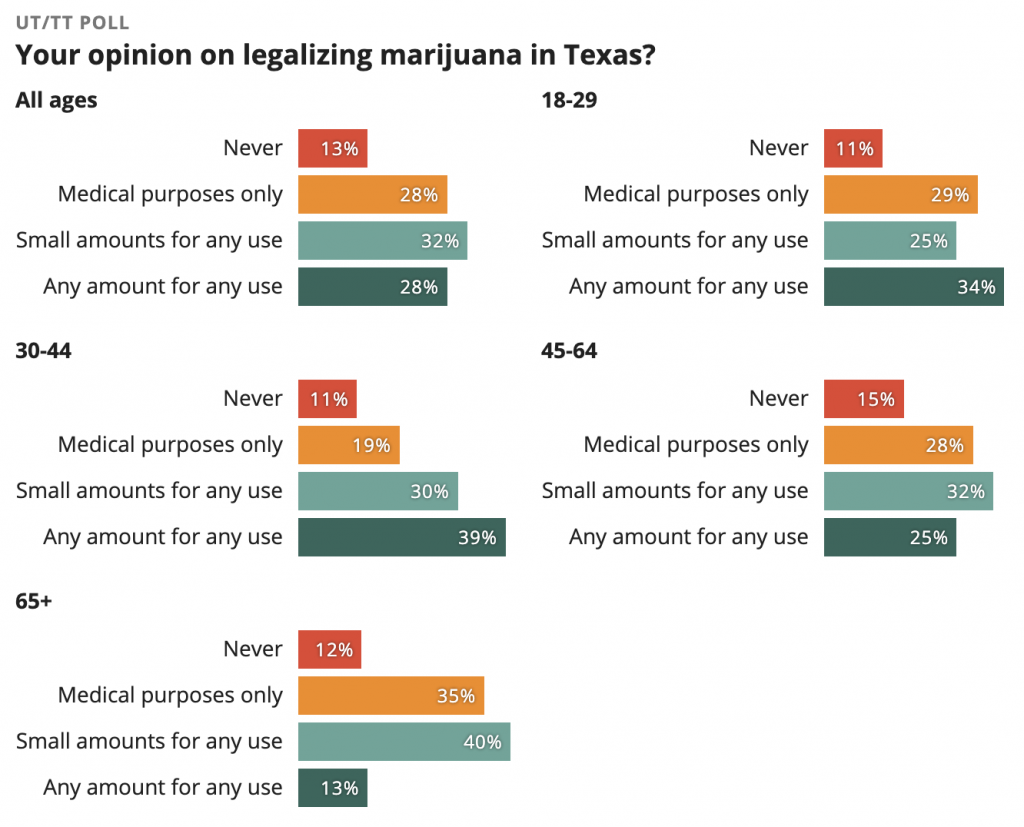 Last month, Fazio’s group displayed a series of educational posters about cannabis reform at the state Capitol. On March 29, it will hold a virtual lobby day where constituents can let their lawmakers know how they feel about marijuana.

The new poll involved 1,200 registered voters was conducted via the internet from February 12-18. It has margin of error of +/- 2.83 percentage points.

Despite strong public support for legalization, passing marijuana reform in Texas has proven to be an onerous task, with Republican lawmakers having historically blocked or defeated legalization proposals.

That said, leaders in both chambers of the legislature have recently indicated that they anticipate more modest proposals to be taken up and potentially approved this session, particularly as it concerns expanding the state’s limited medical cannabis program.

House Speaker Dade Phelan (R) said he thinks “the House will look at” reform measures this year, including bills to legalize for adult use. He said the lawmakers will likely “review those again, and some will get traction, some will not.” However, the Senate remains an obstacle for comprehensive reform.

Legislators in the state prefiled more than a dozen pieces of cannabis legislation ahead of the new session. That includes bills that would legalize recreational marijuana, allow high-THC cannabis for medical use and decriminalize low-level possession of marijuana.

Lt. Gov. Dan Patrick (R), who presides over the Senate, has killed prior efforts to enact reform in the state, raising questions about the prospects of far-reaching changes advancing in the chamber. After the House approved a cannabis decriminalization bill in 2019, Patrick was quick to declare the proposal dead in the Senate.