Marijuana use among adolescents in Washington state did not increase in the years after voters approved legalization for adults in 2012, according to a new study.

The results are contrary to often-expressed fears from prohibition supporters who argued that the move would lead to skyrocketing youth cannabis consumption rates.

But in fact, past-month cannabis use actually declined among 8th and 10th grade students from 2010-2012 to 2014-2016, the new research letter published in JAMA Pediatrics found. There were no statistically significant changes in cannabis consumption for 12th grade students during the time period studied.

The results differ from the conclusions of an earlier study, which found increases in past-month use among adolescents in Washington. That study was based on data from the federally funded Monitoring the Future survey, which is designed to be nationally representative and does not include a large enough sample size to generate state-specific representations.

So researchers at the RAND Corporation and other organizations created their own model to test the earlier study’s conclusion, using data from a randomized state-level survey called the Washington Healthy Youth Survey. Rather than an increase, the data showed that past-month marijuana consumption decreased by a small but statistically significant amount for 8th and 10th grade students. 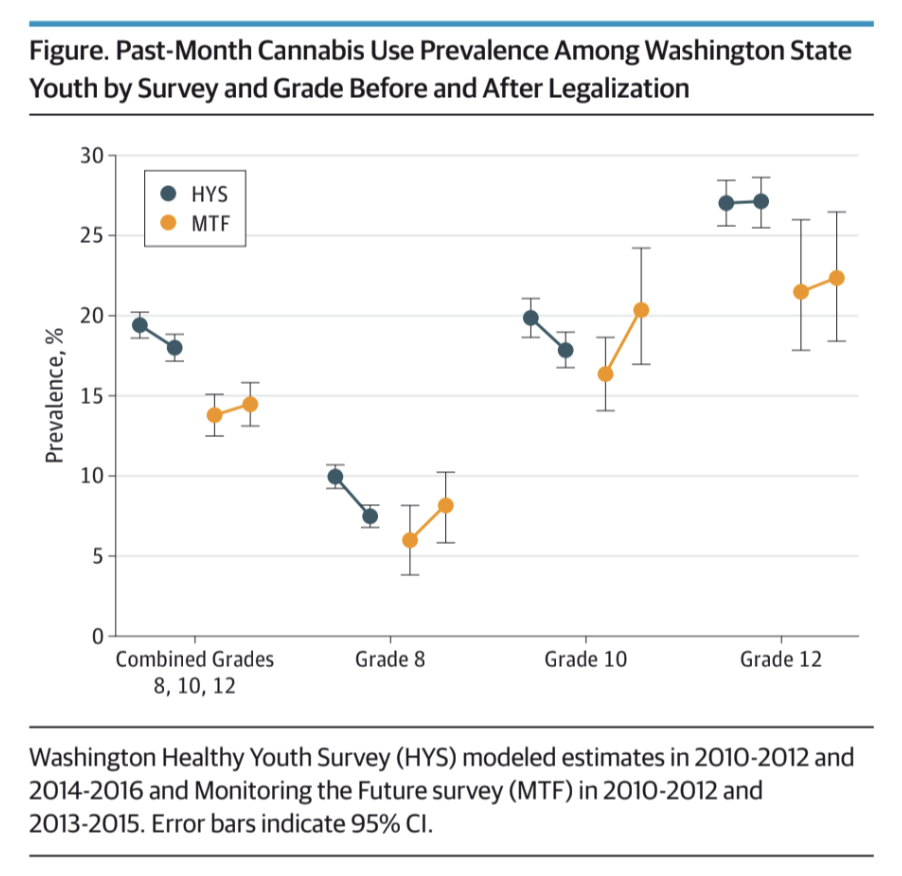 “The effect of legalization on youth marijuana use is an important public health question that needs to be revisited using a multitude of data sets,” study co-author Rosalie Liccardo Pacula said in a press release. “This work underscores the importance of understanding who is being captured in each data set so we can better understand how representative the sample is when trying to draw policy conclusions from the analysis.”

However, Pacula added that their findings “do not provide a final answer about how legalization ultimately may influence youth marijuana usage” and further studies are needed, especially those that can account for localized trends.

That said, the study is just the latest in a line of recent research to indicate that legalization for adults doesn’t cause young people to consume marijuana in greater numbers.

Marijuana Use Doesn’t Actually Change The Structure Of Your Brain, New Study Finds