The Department of Justice paid for a new study on the impact of marijuana legalization that ended up showing cannabis programs do not seem to negatively affect neighboring, non-legal states.

To assess the impact, the researchers looked at statistics on drug possession and distribution arrests in a mix of legalized states and nearby ones that maintained prohibition. According to that data, legalization didn’t cause the sky to fall.

“Legalizing marijuana did not have a noticeable impact on indicators in states that bordered those that legalized,” the study concluded, adding that “there were no noticeable indications of an increase in arrests related to transportation or trafficking offenses in states along the northern or southern borders.”

That is evidently a finding that the Justice Department does not want the public to think it endorses. At the beginning of the report—and on every other page—there’s a disclaimer stressing that while federal funds were used to support the research, “[o]pinions or points of view expressed are those of the author(s) and do not necessarily reflect the official position or policies of the U.S. Department of Justice.”

Here’s what the study authors, who are affiliated with the Justice Research and Statistics Association, found:

Not surprisingly, arrests for marijuana possession dropped significantly in Washington after the state legalized cannabis in 2012. Those arrests continued to drop after retails sales became available. Distribution arrests followed a similar trend. 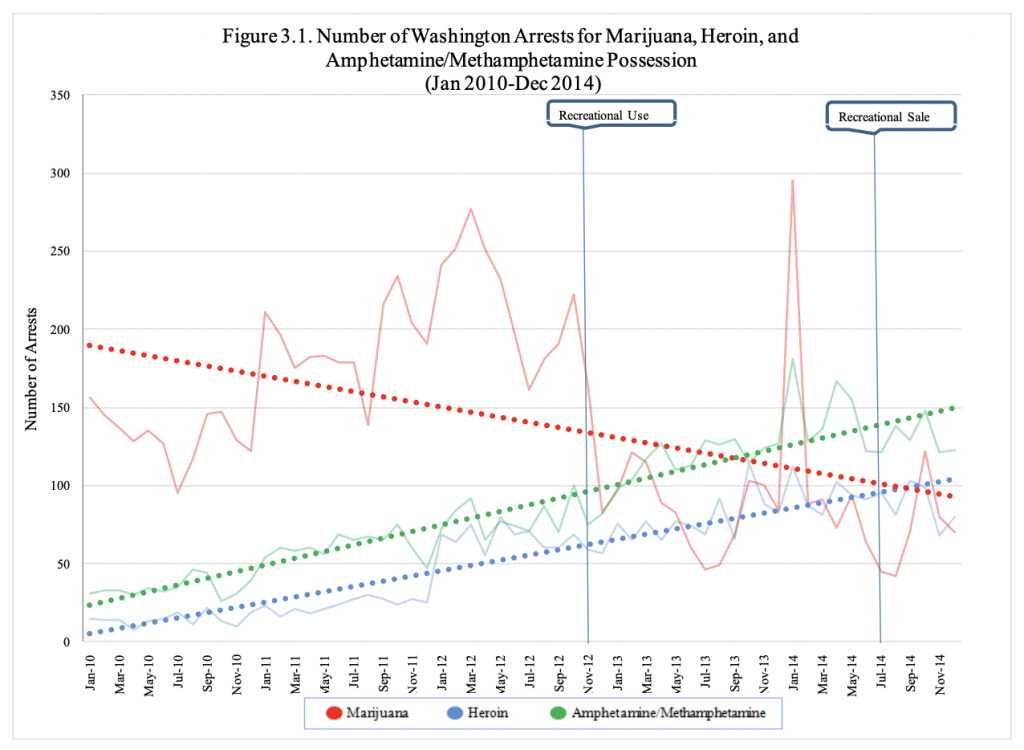 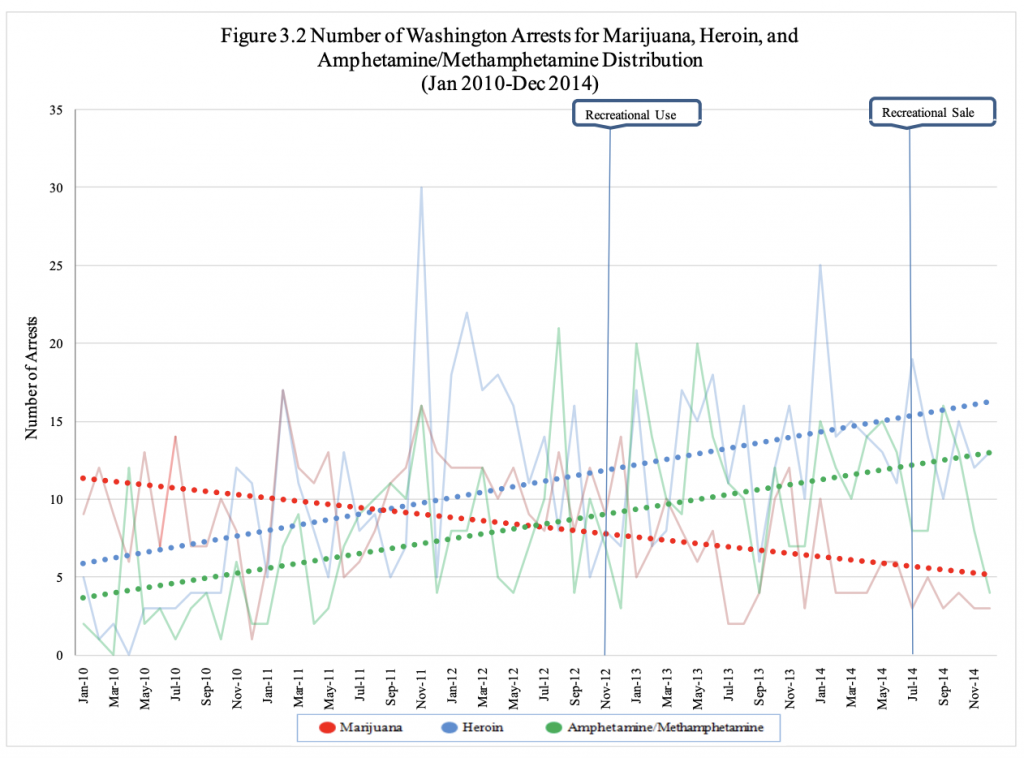 There was less data on Oregon at the time of the study in 2015, as the state legalized the previous year. However, the statistics showed that during “the post-legalization period, arrests for marijuana possession, already low, dropped to close to zero.” Cannabis distribution charges in the state also followed a downward trend. 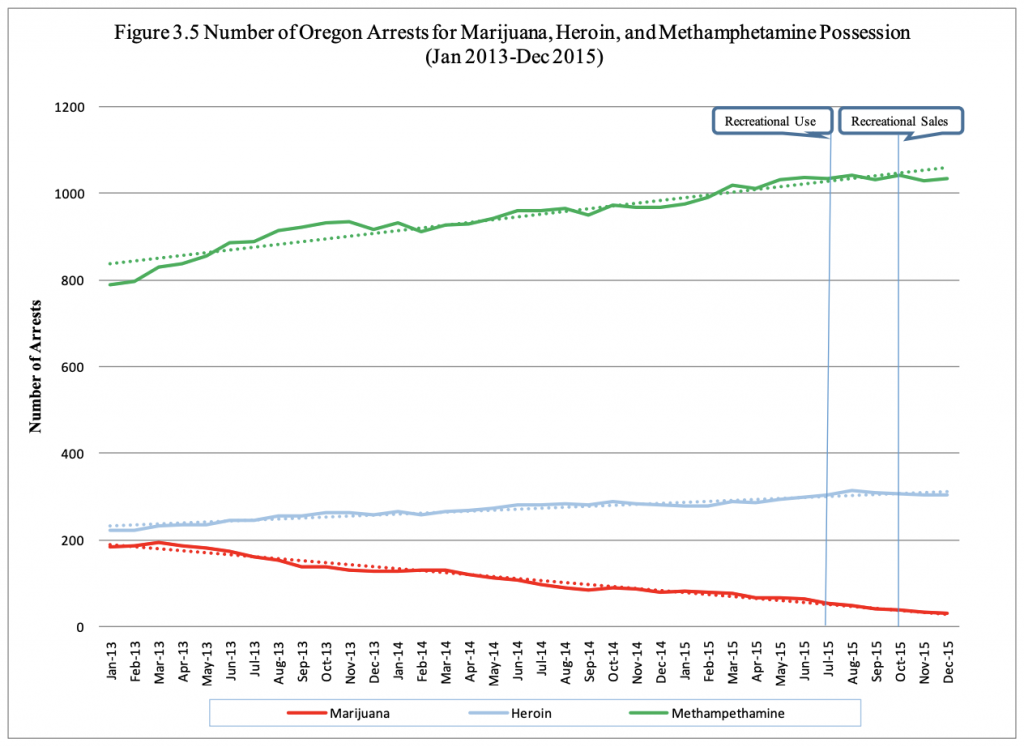 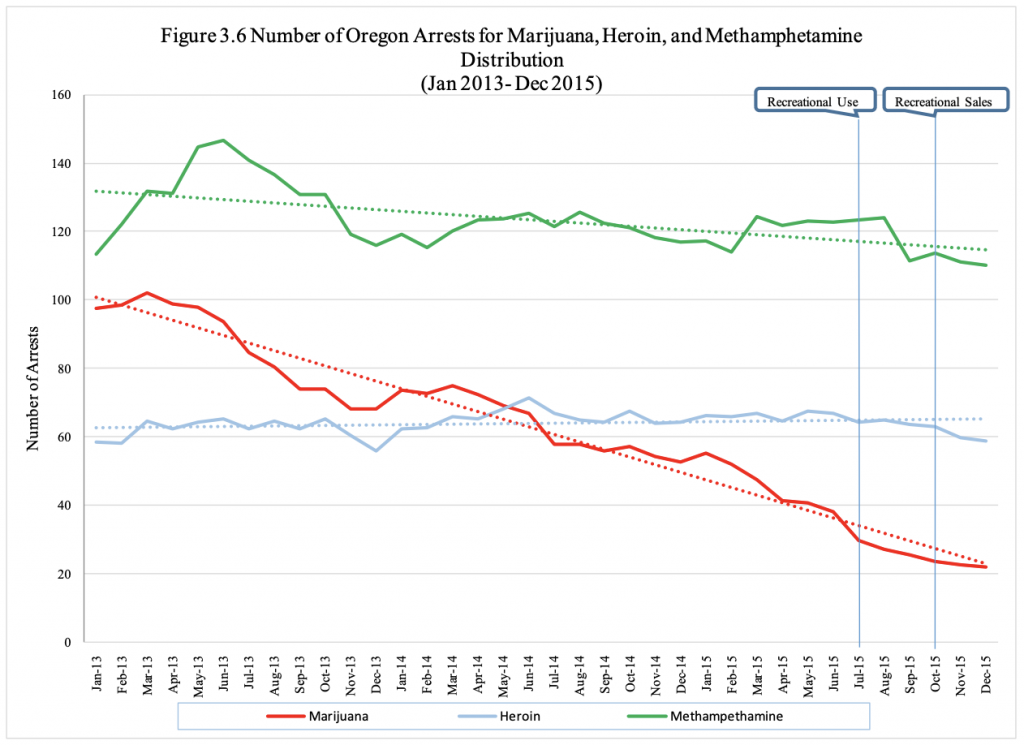 The researchers then looked at neighboring states that did not legalize. While cannabis accounted for the vast majority of drug possession arrests in Oklahoma, where cannabis is still prohibited for adult use, the arrest rate dipped marginally during the post-legalization years in Colorado from 2012 to 2014. 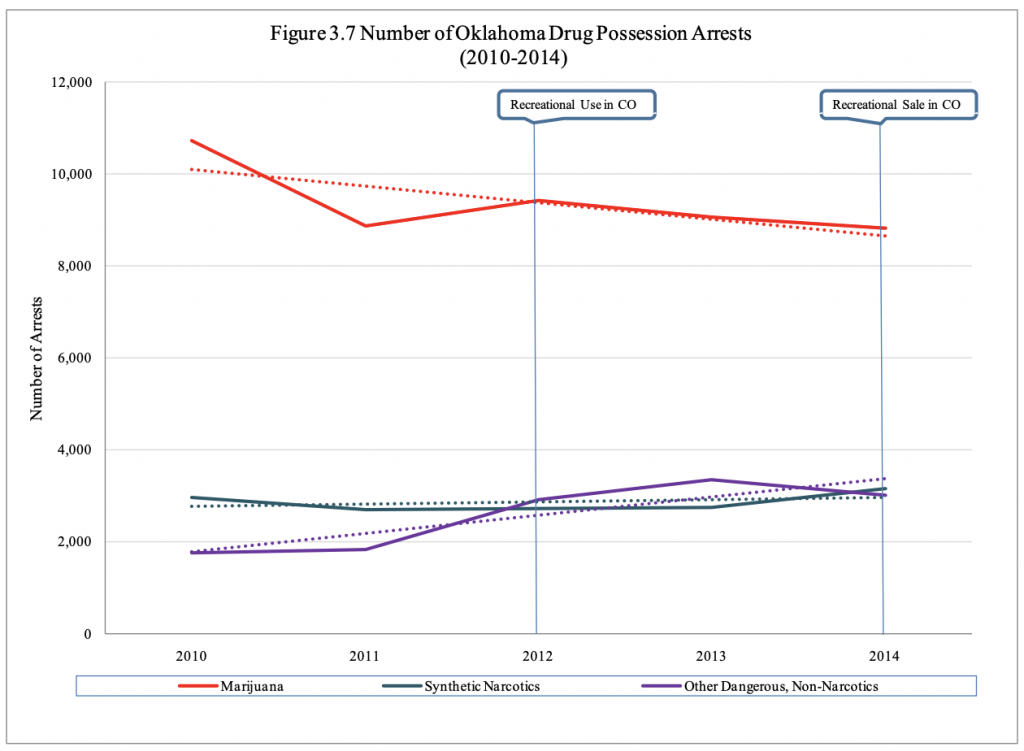 Arrests for sales and manufacturing of cannabis in Oklahoma also dropped in that timeframe, with the exception of a small spike in 2013. 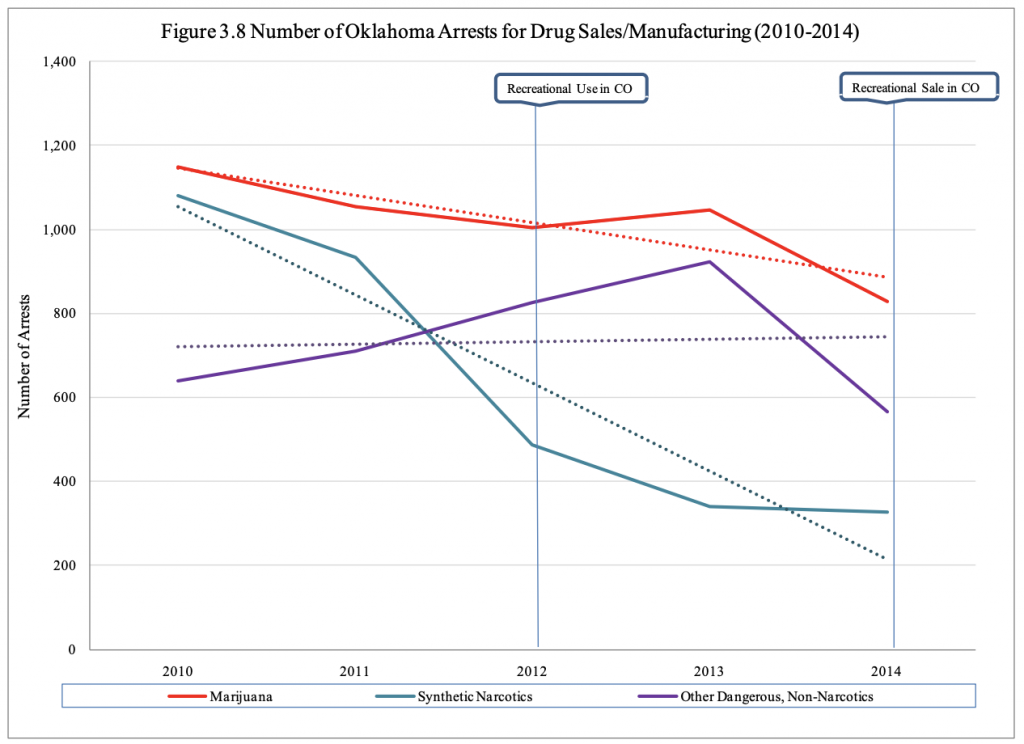 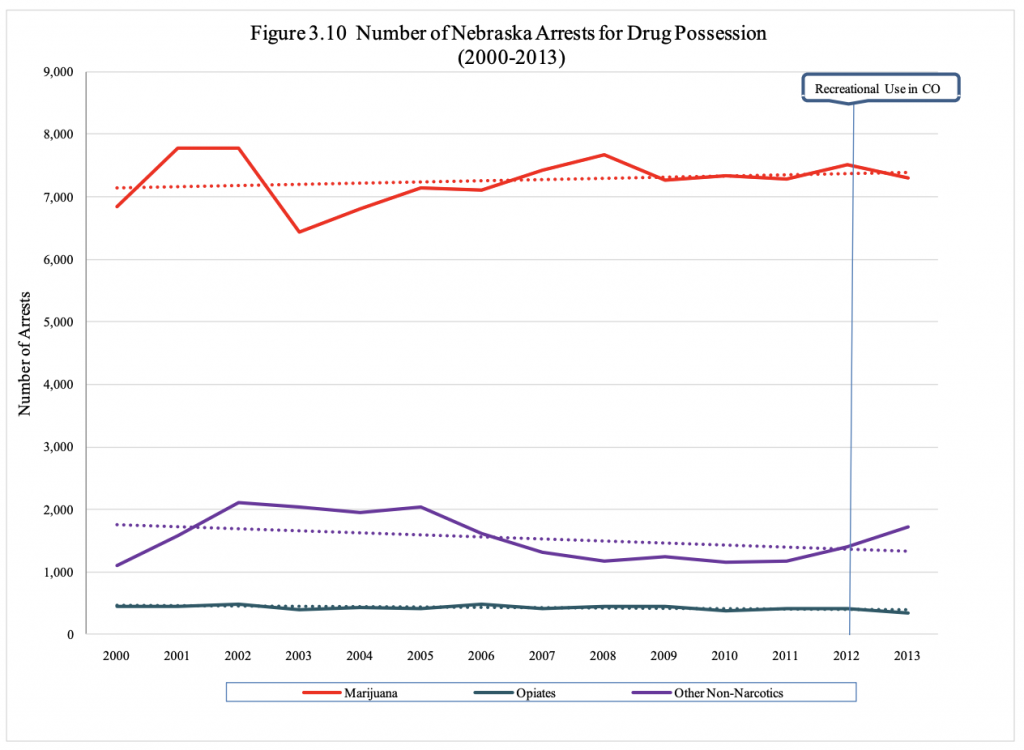 The findings from Nebraska and Oklahoma are particularly notable since those two states sued Colorado over its marijuana legalization law in 2014, alleging that it effectively polluted their jurisdictions with illegal cannabis. The Supreme Court declined to take the case, and the new study seems to undermine the prohibitionist states’ claims about the impact their neighbor’s legalization law had across their borders.

“No noticeable change in the trend line for marijuana occurred after recreational use was legalized in Colorado,” the study authors said of data on possession convictions in Kansas from 2011 to 2014. 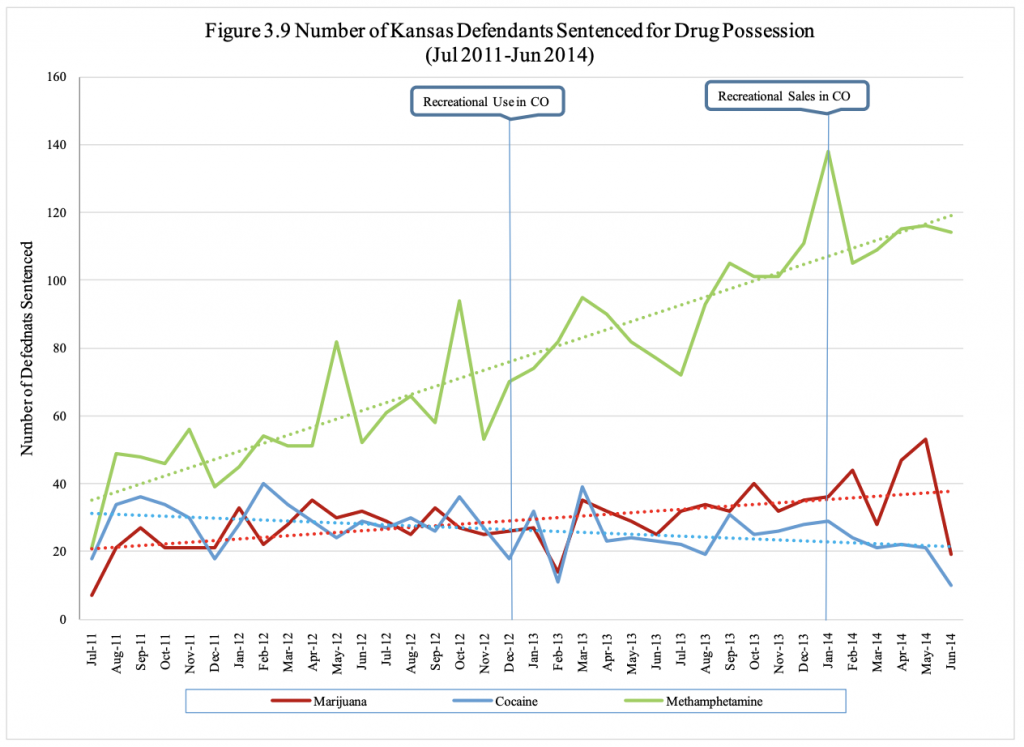 Finally, the researchers looked at drug trafficking trends in Idaho, where cannabis is not legal, and Washington state.

Trafficking arrests actually increased significantly in 2012 and 2013, but at the same time, the number of cases that were ultimately dismissed far outpaced those that ended in a guilty plea in the post-legalization period. 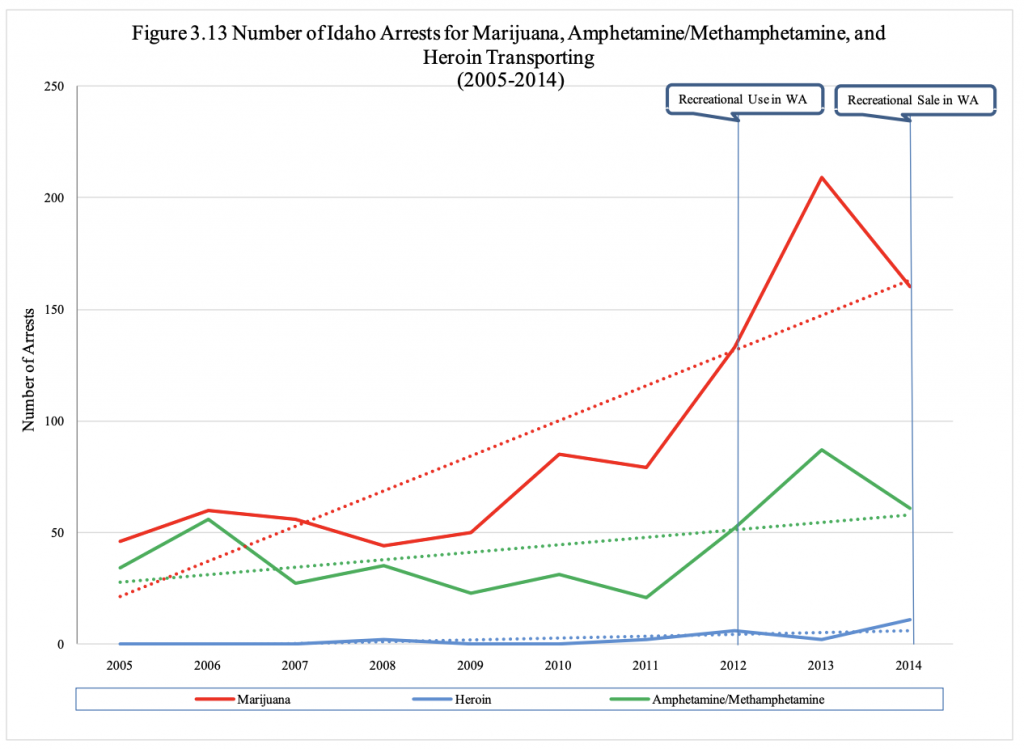 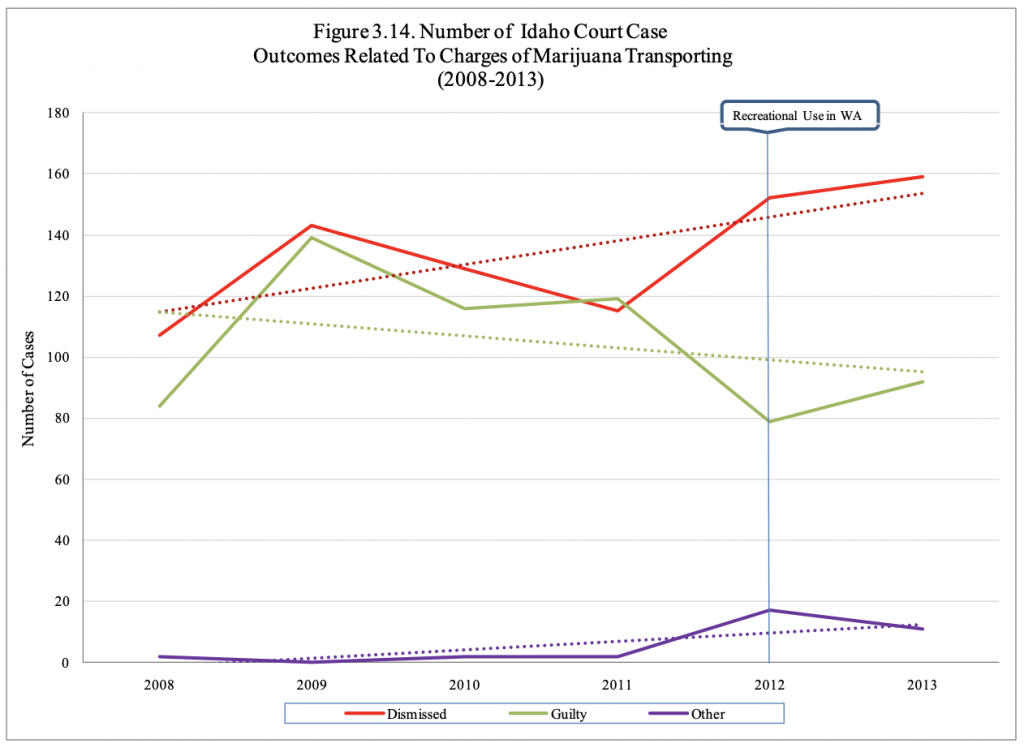 In Washington, seizures of marijuana plummeted after the state legalized cannabis. Those seizures continued to drop, with the exception of a significant spike in January 2014. 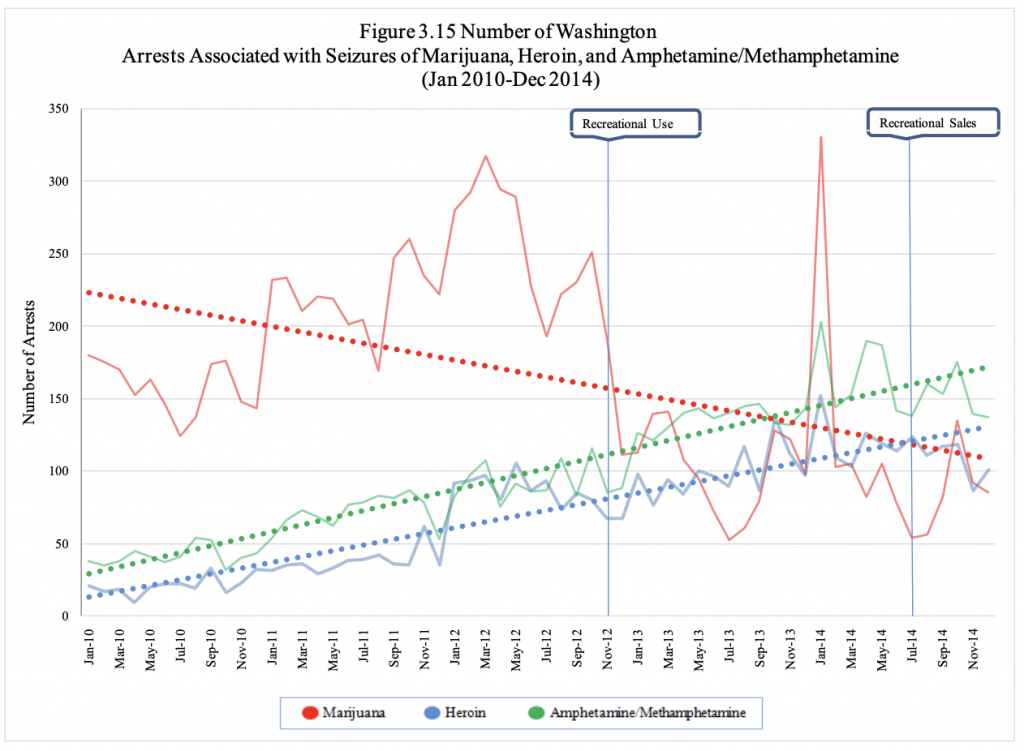 The researchers supplemented their report with interviews with several law enforcement officials. Despite the data-based findings on arrest rates for possession, distribution and seizures, police broadly expressed anecdotal concerns about issues such as perceived increases in youth usage, THC potency, drug-impaired driving and an influx in out-of-state visitors that have taxed their departments.

Colorado-based interviewees apparently indicated that the increased availability in higher potency THC products has mitigated the influence of Mexican drug cartels. However, Oregon respondents “reported that Russian and Afghani groups who steal crops and cash from local growers are now heavily involved in drug trafficking.”

After discussing the data limitations of the study, the authors concluded that “it indeed seems to be the case that legalizing the recreational use of marijuana results in fewer marijuana related arrests and court cases” and that while law enforcement sources voiced various concerns, several “indicated that methamphetamine and heroin were much larger problems for their agencies than was marijuana.”

The team “saw no evidence that marijuana legalization had an impact on indicators in border states,” adding that they “found no indications of increases in arrests related to transportation/trafficking offenses.”

“Again, it is possible that different indicators, examined over a longer period of time, might reveal impacts of marijuana legalization on drug trafficking,” they wrote.