Marijuana extracts can impair the survival of certain types of cancer cells and inhibit their spread, according to a recent study. But the effects of those extracts vary significant based on their specific chemical makeup.

Researchers found that treating cancer cells with isolated ingredients in cannabis, such as THC alone, does not appear to be especially effective—but full cannabis extracts showed more promise. However, with the plant containing hundreds of compounds that appear in different concentrations across strains and preparations, researchers had their work cut out for them in investigating how various cannabinoid combinations treated different types of cancer cells.

The team tested the antitumor effects of 12 whole cannabis extracts on 12 human cancer cell lines in order to “determine whether whole cannabis preparations with specific phytocannabinoid profiles could be advantageous as therapy for certain cancer sub-types.” The findings were published in the journal Oncotarget.

“Our results show that specific cannabis extracts impaired the survival and proliferation of cancer cell lines as well as induced apoptosis.”

Each cell sample was treated with a marijuana extract in increasing doses (2-10 µg/ml) over the course of 24 hours. There were five preparations of cannabis that proved especially potent for a wide range of cancer types but, in general, the study shows there’s significant variability in effectiveness for different cancer types—even when the cancers originated in the same organ. 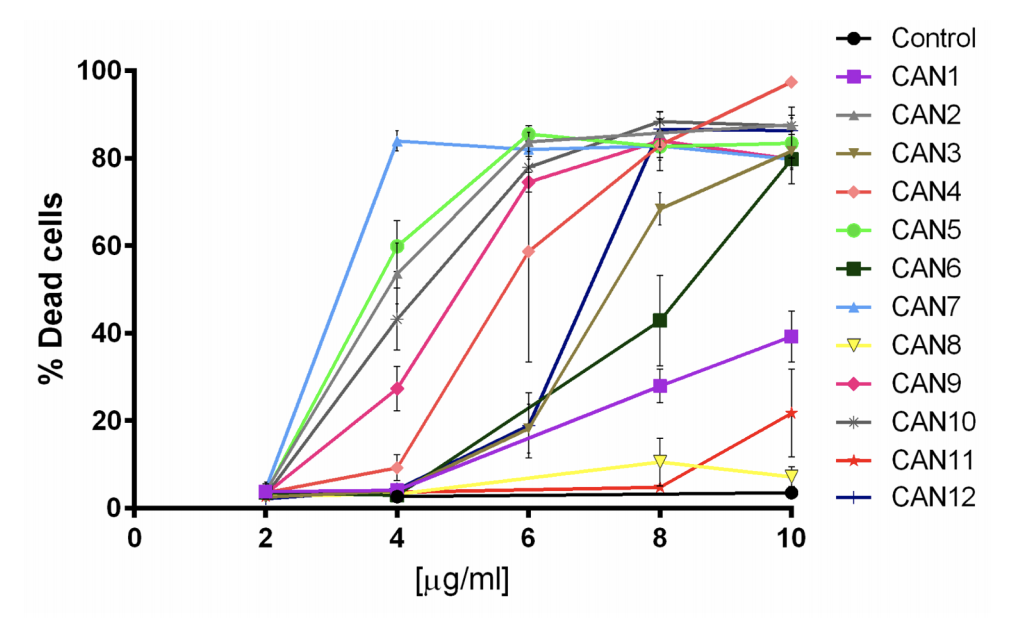 For example, two distinct forms of prostate cancer cells were found to be most sensitive to entirely different marijuana extracts.

The cannabis preparations also ranged widely in their effectiveness in preventing the proliferation of cancer cells. When applied to multiplying cells, there were three extracts that reduced the growths to 37-51 percent of their original size, compared to 68 percent for the control group. But there were other extracts that failed to reduce the spread in a statistically significant manner.

Some commonalities shared among the most potent cannabis extracts include a high concentration of THC and large amounts of phytocannabinoids in their decarboxylated form.

“Taken as a whole, we concluded that medical cannabis does not consist of a single therapeutic agent but rather a heterogeneous array of treatments,” the researchers wrote. “We propose that the fate of specific cancer cells following cannabis extract application is dependent upon the synergistic effects of its phytocannabinoid composition, concentration applied, along with the cell specific characteristics (e.g. cannabimimetic receptor expression).”

“This study demonstrates the anti-cancer activity of various whole cannabis extracts on a set of human cancer cell lines.”

“Furthermore, not all [THC]-rich extracts produce the same effects when applied at the same concentrations on a specific cancer cell line,” the study authors wrote. “These findings indicate that compounds other than [THC] in these extracts might act together in a polypharmacology way and determine the extract efficacy as antitumor agents.”

Interestingly, the researchers also theorized that the the “presence or absence of [cannabinoid receptors] in the tested cell lines may explain the differential potency of the extracts towards reducing cell survival.”

The team called for further research into the “specific properties and mechanisms of cancer cell insensitivity to cannabis extract effects.”

“We hope that this study will lay the groundwork for future preclinical studies and randomized controlled clinical trials in order to provide evidence for effective cannabis treatments for many cancer subtypes,” they concluded.