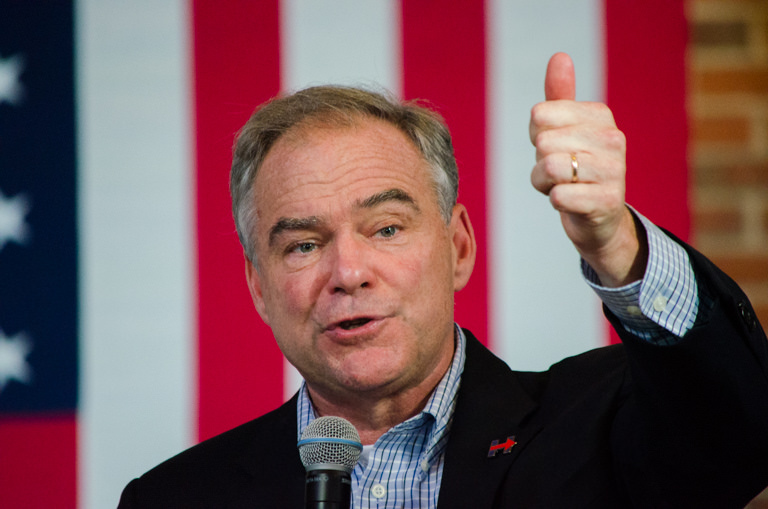 In the span of less than a week, U.S. Tim Kaine of Virginia has signed on to two separate bills to expand marijuana research.

The 2016 Democratic vice-presidential nominee isn’t exactly a champion of cannabis law reform, but he does support broadening scientific inquiry into the drug’s potential medical uses, according to his recent actions in the Senate.

On Monday, Kaine cosponsored a bill sponsored by GOP Sen. Orrin Hatch of Utah that would ease researchers’ access to marijuana for studies on its medical benefits and require the National Institute on Drug Abuse (NIDA) to develop recommendations for good manufacturing practices for growing and producing cannabis for research.

And last Wednesday, Kaine signed on to legislation authored by Democratic Sen. Dianne Feinstein of California to allow the use of cannabidiol (CBD) for epilepsy, remove barriers to research on its benefits and require federal officials to make a scheduling determination on the marijuana component within a year.

Kaine did not cosponsor versions of the CBD bill or broader research legislation last Congress.

“Senator Kaine is open to commonsense changes to marijuana laws and recently co-sponsored bills to expand research looking into the medical benefits of marijuana, including a focus on whether it’s a safe alternative to opioids,” a Kaine spokesperson told Marijuana Moment in an email.

Last year, one day before the election, Kaine incorrectly claimed in a radio interview that President Obama’s administration had rescheduled marijuana.

.@SethKush interviewed @timkaine for 300 secs on Saturday!!! They talked brunch, marijuana & GOT!

“President Obama has recently rescheduled marijuana to a different classification of drugs. Because before, the classification of marijuana was such that you couldn’t even do research into its effects,” he said. “And I think there’s some research that needs to be done, for example about marijuana and pain management. It may be that marijuana, for some kinds of pain management, would be much less harmful than opioid prescription medicines, for example.”

Scheduling aside, the senator supports states’ rights to enact their own marijuana laws without federal interference, a position shared by his 2016 running mate, Hillary Clinton.

“Hillary and I both believe that states can be labs for that and that they should do what they think is right,” he said in the radio interview before Election Day. “Also, we really believe in sentencing reform at the federal level so that folks who’ve been convicted of nonviolent drug offenses should not be in prison to the degree they are in this country. For purposes of the state laws, whether it’s medical or recreational, we feel like we should leave that up to the states.”

Similarly, during a Senate hearing last year, he said, “I actually kind of like this notion of the states as labs and they can experiment [with legalizing marijuana] and we can see what happens.”

“I’ve never been a legalization fan. I just haven’t been,” he said in a 2014 radio interview. “Just for a whole series of both health- and sort of crime-related reasons, I think that would not be a good idea.”

But he did say that some sentences for cannabis are too harsh.

“I have generally been for reexamination of sentences because I think often, for sentences for marijuana and marijuana usage, I think some sentences are too strict,” he said. “These are often, if they’re nonviolent crimes, I think it could be handled in a different way on a sentencing standpoint. But in terms of the decriminalization of marijuana, I’ve never been a proponent.”

Speaking to a group of Virginia high school students last year, he said he “support[s] drastic changes in sentencing laws” but “wouldn’t vote for a law at the federal or state level that would decriminalize marijuana.”