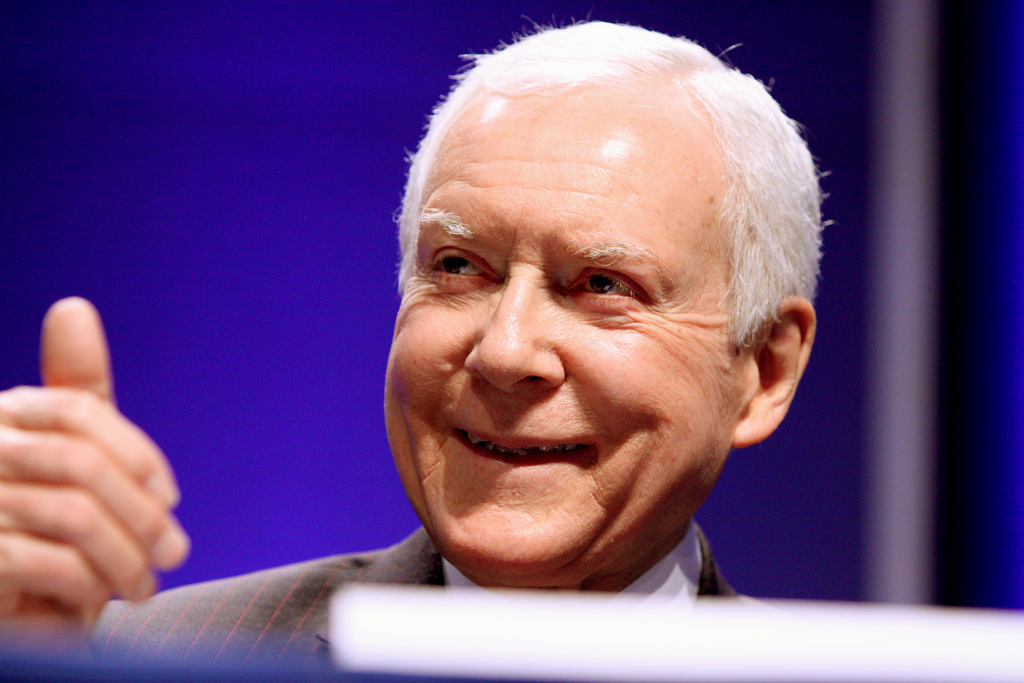 All of a sudden, a Mormon Republican senator from Utah is one of Congress’s leading champions for medical marijuana.

“The evidence shows that cannabis possesses medicinal properties that can truly change people’s lives for the better,” Sen. Orrin Hatch said last month when introducing legislation to remove roadblocks to studies on the drug’s medical potential. “I strongly support research into the medicinal benefits of marijuana, and I remain committed to helping patients find the help they need, whether they suffer from cancer, severe seizures or any other chronic disorder.”

In the days since that Senate floor speech, Hatch has spoken about medical cannabis at seemingly every opportunity. In tweets, press releases, committee hearings and videos, the senator and his staff have consistently maintained a focus on marijuana issues.

Hatch even cited his cannabis advocacy in pushing back against press reports about opioid-related legislation that led to President Trump’s nominee for drug czar withdrawing from consideration last week.

Hatch’s marijuana moves, and how his office has characterized them, have taken many longtime observers of marijuana policy by surprise in light of the Utah GOP senator’s longtime vocal opposition to cannabis law reform.

Despite telling Rolling Stone last month that there’s been “no transformation” in his position on the issue and that he’s “always been for any decent medicine,” a review of Congressional records shows that Hatch’s views have indeed shifted over the years, in a very big way.

In 1977, when Hatch was a first-year freshman senator in, he voted no on a Judiciary Committee amendment to decriminalize possession of small amounts of marijuana. It cleared the panel over his objection, six votes to four.

“We’re sending out a message that really shouldn’t be sent out,” the Utah senator said.

But that was only a temporary setback for prohibitionist forces. After the vote, Hatch threatened to submit a substitute amendment establishing prison sentences for low-level cannabis possession, and the committee reversed itself the following week, undoing the decrim proposal.

Nearly two decades later, Hatch had ascended to the chairmanship of the panel. In December 1996, just weeks after California and Arizona voters became the first in the country to approve medical cannabis, he convened a Judiciary Committee hearing with the intent of pressing Clinton administration officials to work to overturn the state measures.

“Perhaps the most effective way to handle this would be to work with concerned citizens in Arizona and California who want to modify or repeal these initiatives,” he said, according to the hearing record. “I would like to know what the administration’s thinking is in this area and who is going to make these decisions as soon as possible because I think we can’t let this go without a response.”

Citing the DEA and other cannabis opponents, Hatch said that the “asserted medical benefits of marijuana have been rejected,” “marijuana is likely to be more cancer-causing than tobacco” and that the state initiatives “send the wrong message to our youth and easily could worsen the problem.”

He argued that the drug legalization movement essentially tricked voters into approving the ballot measures with “disingenuous tactics” such as misleading TV ads that “tug at the heartstrings.”

“Today, we will hear how the philanthropists of the drug legalization movement pumped millions of dollars in out-of-state soft money into stealth campaigns designed to conceal their real objective — the legalization of drugs. We will view some of their deceptive advertisements and we will learn the true threat these soft-headed campaigns pose to America…

“These were successful examples of stealth political strategies — that relied on misdirection and dissemblance to persuade the public that a campaign is devoted to salving the pain of the ill and dying or is designed to ‘get tough’ with drug offenders, but in truth were just a first step in a larger movement toward decriminalization of controlled drugs.”

Over the years, however, Hatch apparently met people whose real stories convinced him that cannabis actually does have medical benefits.

In the floor speech he gave introducing his marijuana research bill last month, for example, the senator told the story of a young constituent suffering from severe epilepsy, whom he called a “friend.”

“The current treatment for his condition, with no guarantee of success, would be invasive brain surgery,” Hatch said. “This poor family is seeking help, yearning for a way for their child to live a safe and healthy life. Compounds found in marijuana could significantly mitigate the severity of my friend’s seizures and even help him lead a normal life. But current regulations prevent the development of any such treatment from going forward. So this young man is left to suffer.”

Far from the dire warnings he deployed in the 1996 hearing, Hatch has even taken to jokingly using pot puns in his statements about cannabis. A lot of them.

“As I said last month on the Senate floor, it’s high time we give stone-cold serious consideration to medical marijuana research. For twenty years, states have delved into the weeds of potential uses, but research has often been stymied by a puffed-up regulatory bureaucracy. As doctors strain to find effective alternatives to addictive opioids, they need more than token gestures from Congress; they need potent solutions. That’s why the bill we have rolled out is not a half-baked policy proposal but an earnest effort to address a chronic problem in the system. With growing support from Democrats and Republicans alike, this joint effort represents a unique hash of ideas from members of both parties, and a budding opportunity for real bipartisan reform. We need to blaze a trail for a new era of medical research, and this legislation will light the way.”

While many experts maintain that marijuana is not addictive they have not made the same claim about puns.

Last week, Hatch’s office tweeted a link to a Marijuana Moment story about his pressing U.S. Attorney General Jeff Sessions on marijuana research during a committee hearing, and then followed up with a second tweet facetiously wondering “why anyone would be surprised to find out Orrin Hatch reads ‘Marijuana Moment.'”

Can’t figure out why anyone would be surprised to find out Orrin Hatch reads “Marijuana Moment.” https://t.co/YvCXHZTdbU

Hatch filed a similar marijuana research bill last year, but did not so clearly endorse cannabis’s medical potential in his related remarks upon introduction as he did this time. And his staff didn’t do nearly as much press outreach or social media work about the earlier bill.

The senator’s increasingly involved work on marijuana could be related to the issue’s growing prominence in Utah. Activists there are currently collecting signatures to place a medical cannabis measure on the state’s 2018 ballot.

While Hatch hasn’t publicly weighed in on how he plans to vote on the initiative if it qualifies, he did recently sit down with its organizers, and his office tweeted about the meeting.

Alex Iorg, campaign manager for the Utah Patients Coalition, which is behind the ballot measure, was at the half-hour meeting with the senator.

Hatch’s “change in direction and understanding is very similar to what most people have gone through since the mid-90s. Back then there wasn’t a lot of research,” Iorg told Marijuana Moment in an interview. “He’s learned more, and I think of my parents. Back then they would’ve been totally against it. And now they’re open to the medical value of cannabis, and they’re strong, conservative [Mormons]. I’m sure that his evolution in acceptance of this has evolved right along with most people in Utah.”

A big part of that evolution has been driven by the stories of patients like the young man with epilepsy that Hatch mentioned on the Senate floor last month.

“Those stories have made a huge impact and I think they are mostly to account for the change that you saw in Hatch in mid-90s to today,” said Iorg, who once interned in the senator’s office. “It is those patient stories. They are powerful.”

If Hatch does end up endorsing the ballot measure, it would put him opposite the official stance of The Church of Jesus Christ of Latter-day Saints, commonly referred to as the Mormon Church or LDS, of which he is a member.

“We believe that society is best served by requiring marijuana to go through further research and the FDA approval process that all other drugs must go through before they are prescribed to patients,” the Church said in a statement earlier this year.

But while the Church isn’t necessarily on board with the ballot measure, Iorg’s campaign is getting a lot of support from its individual devotees.

“Among LDS conservative members, we’re polling over half. These are conservative, very active Mormons and we’re finding that what we considered probably our toughest demographic, most of them support our cause,” he said.

While the campaign hasn’t specifically pressed Hatch for an endorsement yet, Iorg thinks the senator would be open to considering it once the measure qualifies for the ballot early next year.

“He was very open and genuinely interested,” the activist said of the senator’s disposition in the recent meeting. “He gave great feedback and asked good questions.”

Perhaps because of his faith, Hatch himself admits he is an “unlikely” ally for medical cannabis patients.

“I’m against illicit drug use and have always been very strong in these areas,” he told Roll Call. “But I’m also a pioneer in good medicine and how we can help doctors and scientists… I have to make these decisions based upon what’s right for the people of Utah and the people of this country. And there’s no reason to be afraid of medical marijuana.”

That’s a far cry from two decades ago, when Hatch argued from the dais of the Senate Judiciary Committee that there are many reasons people should fear legalizing medical cannabis.