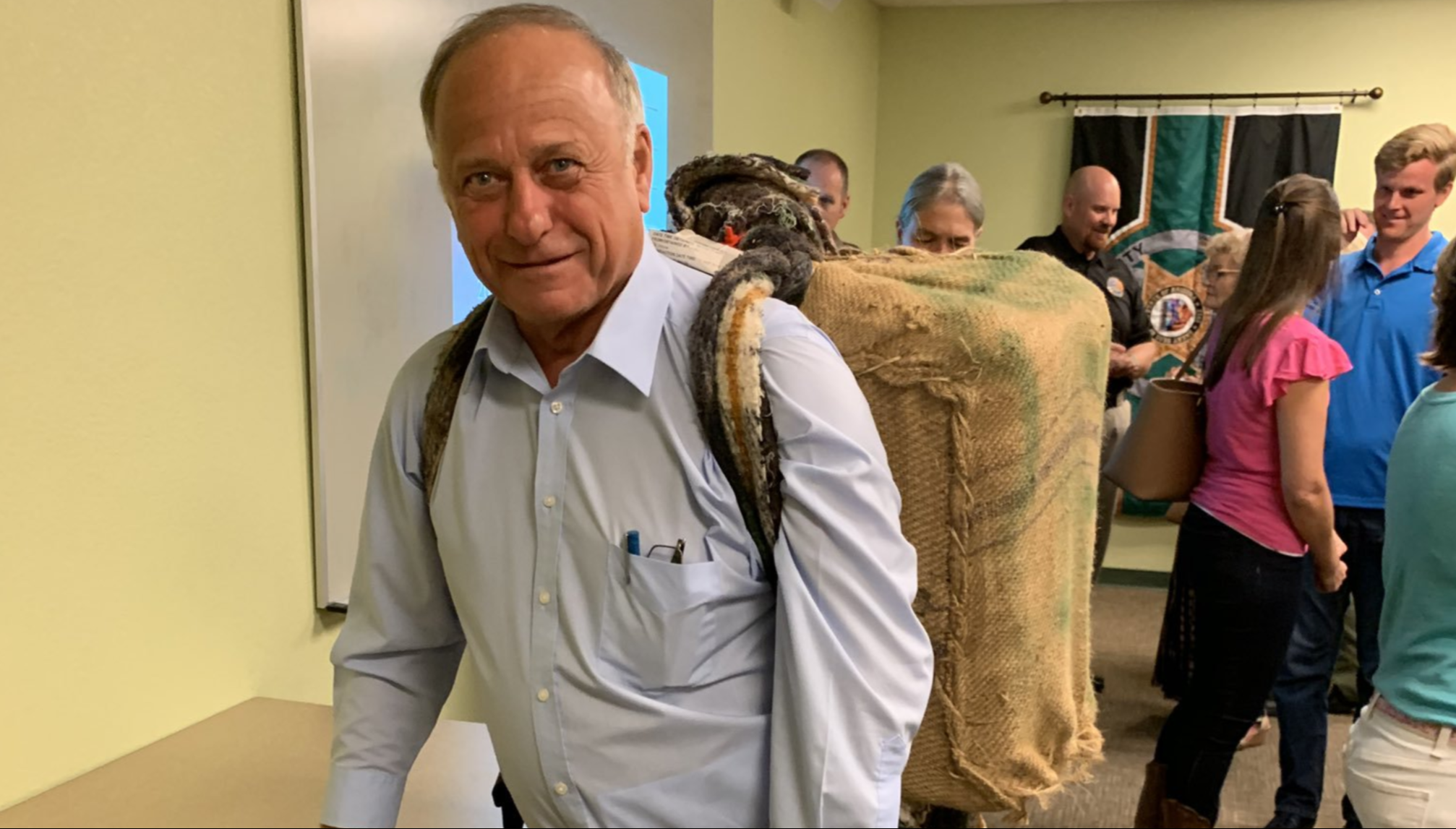 A Republican congressman apparently tried to make a point about immigration policy last week by strapping on a confiscated backpack that was reportedly used to traffic marijuana across the Southern border.

Rep. Steve King (R-IA) wore the backpack while visiting the Cochise County, Arizona Sheriff’s Office along with other conservative lawmakers who were touring the border.

Cochise County Sheriff Mark Dannels(born in Iowa)& me at briefing, Brisbee, AZ. May be best anti-drug smuggler enforcement by a county in U.S. Drug mules routinely carry up to 100 lbs 40-50 miles. This is about 48 lbs on my back. pic.twitter.com/fDN5mh22mp

“May be best anti-drug smuggler enforcement by a county in U.S.,” King wrote of the department that supplied the backpack for his photo op. “Drug mules routinely carry up to 100 lbs 40-50 miles. This is about 48 lbs on my back.”

King has argued that building a wall along the U.S.-Mexico border would prevent drug trafficking. And while he may have felt the burlap sack was emblematic of trafficking trends, federal drug officials have made clear that’s not the case.

The Drug Enforcement Administration reported last year that while there are instances of cannabis being illegally transported via backpackers crossing the border, “the majority of marijuana smuggled into the United States occurs between the ports of entry on both the northern and southern borders.”

The congressman, who has a long history of making racist statements, was removed from committee assignments in January amid outcry over comments he made indicating that he was not offended by white supremacy.

His latest display isn’t particularly surprising given his long history of misrepresenting immigrants to advance an anti-multiculturalist agenda.

In 2013, he was admonished after making offensive remarks about individuals brought to the country illegally as children, stating that some go on to achieve success but that they “aren’t all valedictorians.”

“For every one who’s a valedictorian, there’s another 100 out there who weigh 130 pounds—and they’ve got calves the size of cantaloupes because they’ve been hauling 75 pounds of marijuana across the desert,” he said, drawing widespread condemnation.

He later doubled down on the characterization, claiming his “numbers have not been debunked. I said valedictorians compared to people who would be legalized under the act that are drug smugglers coming across the border.”

Jason Ortiz, vice president of the Minority Cannabis Business Association (MCBA), told Marijuana Moment that King “has been a repeated embarrassment to his constituents and to our country as a whole.”

“MCBA stands with immigrant families working toward a better life and against the hateful bigotry of reefer madness fueled politicians like Mr. King,” he said.

Particular smuggling routes side, federal cannabis trafficking cases are on the decline, with experts attributing that trend to state-level legalization efforts that are disrupting the illicit market.