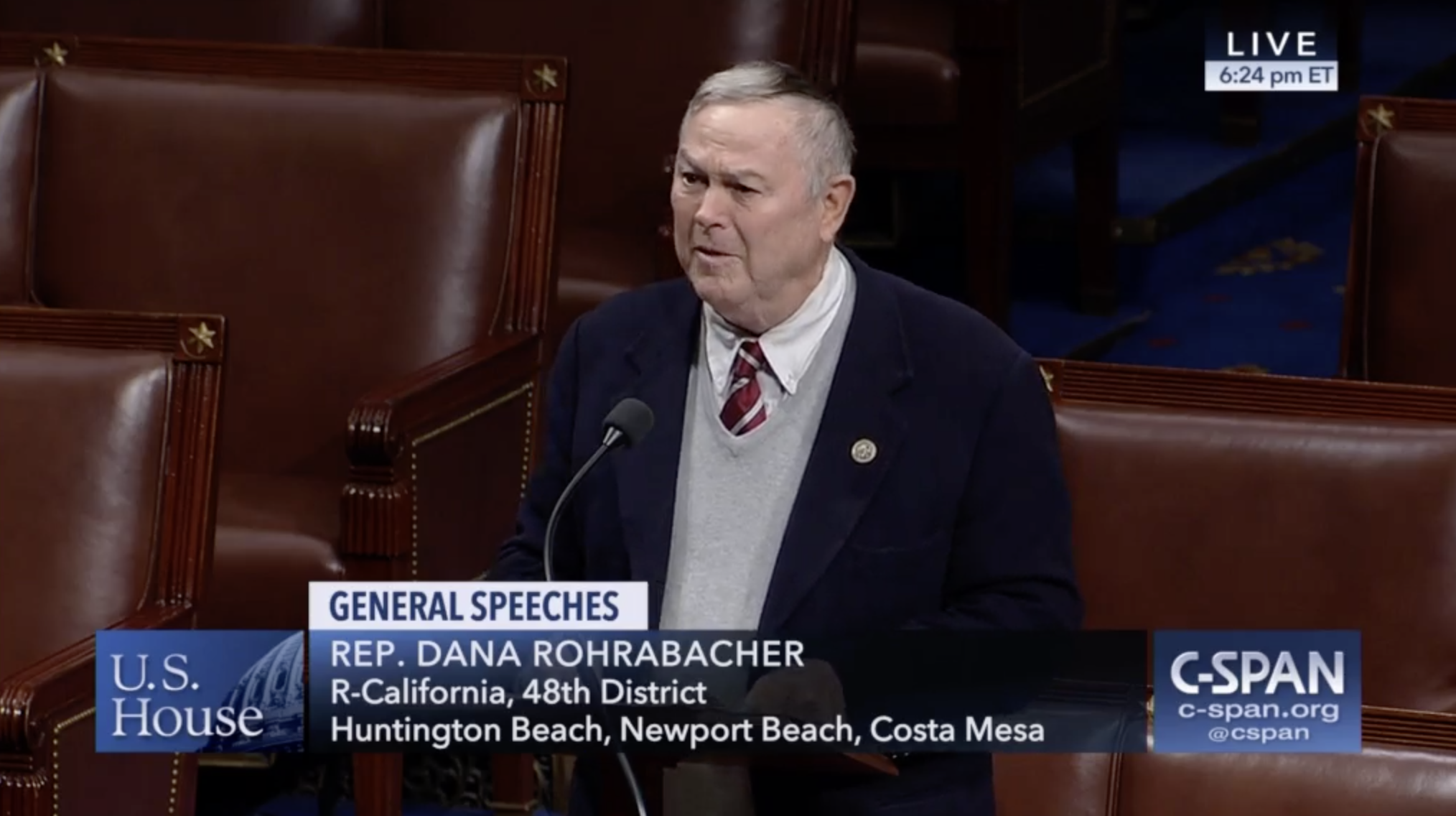 Outgoing Rep. Dana Rohrabacher (R-CA) reflected on his 30 years of service in Congress in a wide-ranging farewell speech on Wednesday, and he dedicated several minutes to talking about progress he helped achieve on marijuana reform.

“I cannot think of a life I would rather have lived—the highs and the lows, the idealism and the pragmatism, the courage and the weakness, the disappointments, and yes, the joyous outcomes that I have seen here as part of this living institution in its 230 years of legislative service to the people of the United States,” he said.

Rohrabacher, who lost his seat to Democrat Harley Rouda in this month’s midterm election, ran down a list of achievements he was proud of and also defended himself against claims that he was Russian President Vladimir Putin’s “favorite congressman.” About half-way through the speech, which he titled, “Standing Against The Tide,” he turned his attention to cannabis.

The “conservative credentials” that he earned during his time as President Ronald Reagan’s special assistant enabled him to “talk to conservative people throughout the country—and, yes, throughout the House and the Senate—on the issue of cannabis,” Rohrabacher said.

“The fact is, marijuana created an illusion of disruption and of decadence in the American peoples’s minds, because in the late sixties the use of marijuana was so public and it was identified as something with hippies and people who didn’t like American culture. Well, the fact is, cannabis has tremendous service to give to the people of our country who are suffering from various maladies.”

Elderly people suffering from pain or lack of appetite, children with epilepsy and even individuals working to kick opioid addictions can benefit from marijuana, he said on the House floor. Cannabis “is not a gateway door into the use of opiates,” but rather “a way out.”

Finally, Rohrabacher described one of his most well-known legislative accomplishments: sponsoring an amendment that prohibits the Justice Department from using federal funds to interfere in state-legal medical cannabis programs. That amendment, he said, helped a burgeoning legal market balloon into a $6 billion industry.

“My colleagues joined me in that. I think that has been a wonderful accomplishment that I am very, very proud of and very grateful that I had the opportunity to be here and express that in debate and to reach out to my fellow congressmen here from both sides of the aisle and mobilize a majority that got that passed so that the federal government cannot supersede state law now when it comes to medical marijuana.”

The congressman closed the 30-minute speech by emphasizing his gratitude for having had the opportunity to serve. As one of the most vocal marijuana reform advocates on the GOP side of the House, Rohrabacher’s absence could potentially complicate bipartisan legislative efforts.

But at the same time, with a new Democratic majority and multiple incoming committee chairs already talking about reform, the chamber could be well-positioned to continue the work that Rohrabacher played a key role in advancing, even in his absence.

Hemp Legalization Is Officially In The Final Farm Bill