A new federal survey has received significant media attention this week for showing the rapid rise in the use of psychedelics among young adults, which some officials say may be attributable to the increased media attention to the therapeutic potential of the substances. But the trend seems to be limited to adults, with other recent studies and surveys revealing that teen use of hallucinogens is down in recent years.

Taken together, the federally backed Monitoring the Future survey and a separate study published last week in the journal Addiction reveal similar trends: Psychedelics have been steadily gaining popularity among adults, while underage people are generally losing interest in hallucinogens like psilocybin.

It’s a research topic that has generated increased attention in the scientific community as more jurisdictions have moved to decriminalize entheogenic plants and fungi, or provide therapeutic access to the substances given evidence that they could effectively treat symptoms of mental health conditions like severe depression and post-traumatic stress disorder.

And while prohibitionists have increasingly turned their attention to the psychedelics reform movement, peddling the same concerns about increased underage use that they claimed would happen as more states have moved to legalize marijuana, the recent data is again throwing those arguments into question.

According to the peer-reviewed study from Columbia University researchers, it is the case that adult use of hallucinogens has recently spiked, particularly among those 26 and older. A total of 5.5 million people reported past-year psychedelics use in 2019, the most recent year for which data is included.

But that’s not the case for teens:

Columbia University’s Ofir Livne, a co-author of the study, which received funding from the National Institute on Drug Abuse, said that increased media attention to the science of psychedelics as a therapeutic tool mean that their “findings merit a comprehensive examination of time trends and motives for hallucinogen frequency and quantity of use.”

Deborah Hasin, lead author of the study, said: “In light of popular media reports of a forthcoming ‘psychedelic revolution’ with commercialization and marketing that may further reduce the public perception of any risk, researchers, clinicians, and policymakers should increase their attention to the rising rates of unsupervised hallucinogen use among the general public.”

“Our results highlight such use as a growing public health concern and suggest that the increasing risk of potentially unsupervised hallucinogen use warrants preventive strategies,” Hasin said.

That survey, released late last year, found that youth marijuana use “decreased significantly” in 2021, as did teen consumption of illicit substances overall.

The study, which has been tracking adolescent drug behavior and attitudes since 1975, also revealed a large drop in past-year cannabis use among 8th, 10th and 12th graders.

With respect to past-year consumption of hallucinogens beside LSD, MTF has identified a fairly consistent drop in use by teens since its peak in 2001, when 5.9 percent of 12th graders, 4.3 percent of 10th graders and 2.4 percent of 8th graders said they’d used psychedelics in the past 12 months. 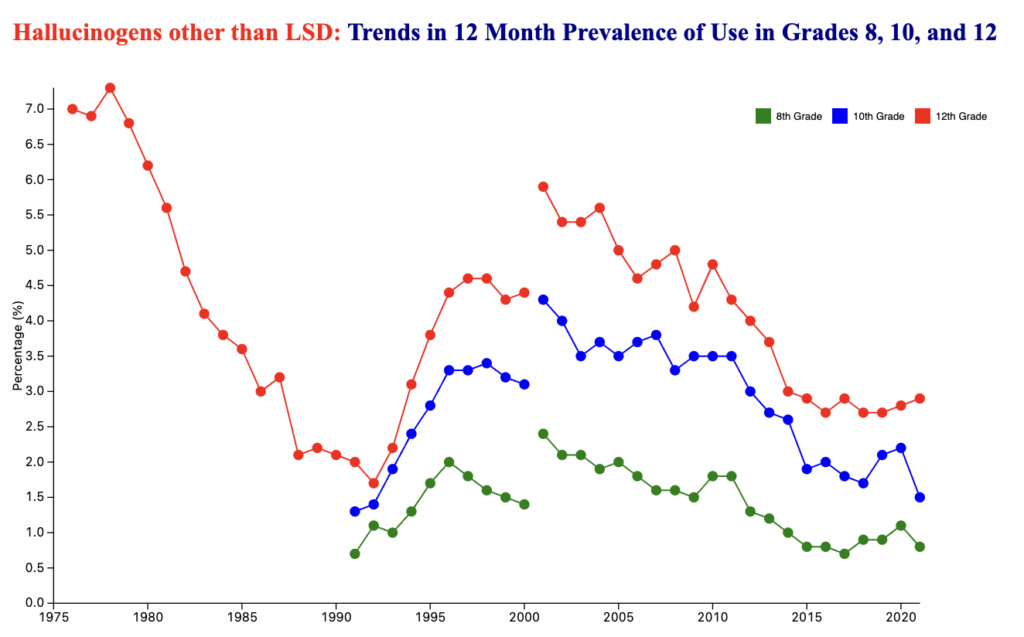 Put another way, even in the absence of regulated markets for drugs like psilocybin, DMT and ayahuasca, the upward trend in psychedelics use for adults simply hasn’t carried over to teens.

Another edition of the MTF survey that focuses on young adult drug trends that was released this week did return with results that support the idea that more people are trying psychedelics as more information is released about the potential therapeutic benefits and as laws governing the substances are loosened in cities and states across the country.

MTF’s earlier 2021 survey on teens found that past-year use of psychedelics like psilocybin and LSD among college students nearly doubled from 2019 to 2020, from five to nine percent—but it still shows that use is lower than in the 1990s and early 2000s.

The official talked about how recent, federally funded surveys showed that fewer college-aged adults are drinking alcohol and are instead opting for psychedelics and marijuana. She discussed the findings in an earlier interview with Marijuana Moment as well.

Volkow has also conceded that advocates were “right” that teen cannabis use wouldn’t spike after legalization was enacted, despite her early concerns. But while that’s encouraging, the official has been a consistent voice pushing for more and more research into marijuana, which is made all the more urgent amid the reform movement.

The federally funded National Survey on Drug Use and Health (NSDUH) that was released last year showed that youth marijuana use dropped in 2020 amid the coronavirus pandemic and as more states moved to enact legalization.

For both cannabis and psychedelics, the Columbia study and the MTF survey on young adults did show recent increases in people who were of legal age, however.

Volkow said that “as the drug landscape shifts over time, this data provides a window into the substances and patterns of use favored by young adults.”

“We need to know more about how young adults are using drugs like marijuana and hallucinogens, and the health effects that result from consuming different potencies and forms of these substances,” she said. “Young adults are in a critical life stage and honing their ability to make informed choices. Understanding how substance use can impact the formative choices in young adulthood is critical to help position the new generations for success.”

In the conclusion section of the separate Columbia study, authors said that, because of “popular media reports of a forthcoming ‘psychedelic revolution with commercialization activities that may further reduce public perception of any risk, researchers, clinicians and policymakers should increase their attention to the rising rates of unsupervised hallucinogen use among the general public.”

“Our results highlight such use as a growing public health concern and suggest that the increasing risk of potentially unsupervised hallucinogen use warrants preventive strategies,” the study said.