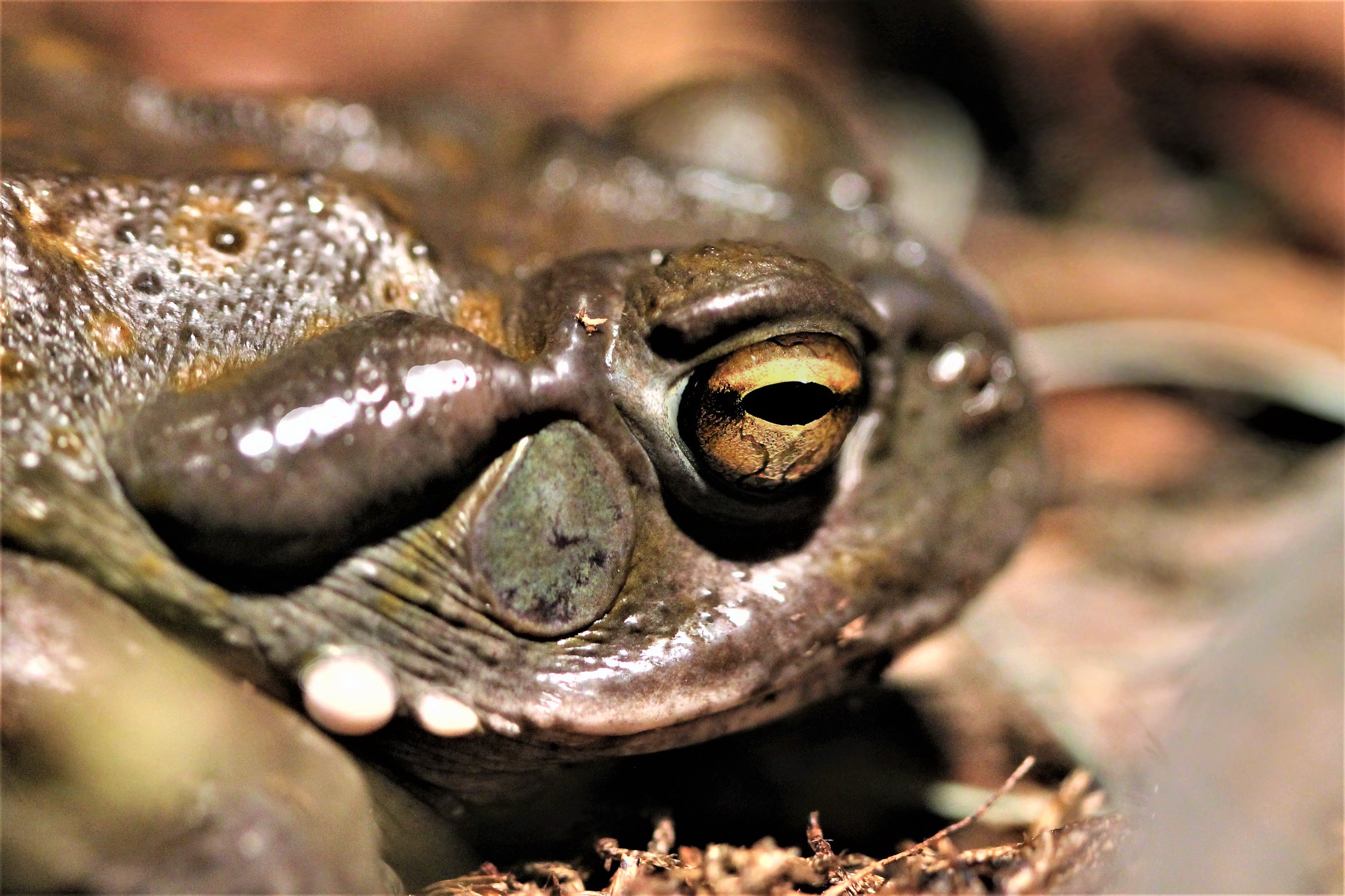 A single smoked hit of the dried psychedelic secretion of a certain North American toad can potentially improve a person’s mental health, according to new research.

“Ratings of depression, anxiety, and stress decreased after the session, and reached significance at 4 weeks,” the researchers wrote.

The substance in question is called 5-methoxy-N,N-dimethyltryptamine (5-MeO-DMT), which was initially discovered in the bark of a plant. Researchers later realized the Bufo alvarius toad, more commonly known as the Colorado river toad, secretes a poisonous, milky-white substance in its skin and glands that also contains the 5-MeO-DMT compound.

People who smoke 5-MeO-DMT report having mystical-type experiences, characterized by awe, amazement, intense self-awareness and timelessness, among other effects. Past research has also shown that the compound is associated with a reduction in symptoms of anxiety, depression and post-traumatic stress, and has effectively helped consumers deal with alcoholism and drug abuse.

As first reported by IFL Science, the current study, led by Malin Uthaug of Maastricht University, aimed to better understand just how effective 5-MeO-DMT could be as a treatment for certain mental health conditions. The authors recruited a total of 75 people from Czech Republic, Spain and The Netherlands to participate in their observational research. Forty-two percent of participants said they were interested in the practice because they wanted to better understand themselves, while problem-solving and spiritual healing were cited as other motivations.

The study’s authors assessed participants using several psychiatric tests at three different points: prior to the session during which they inhaled the vapor containing 5-MeO-DMT, 24 hours after use and four weeks post-inhalation. During the sessions, facilitators reported participants inhaled a range of 20 milligrams up to 120 milligrams of the dried toad secretion.

According to the study’s findings, which were published in the journal Psychopharmacology, a single dose of the dried toad secretion containing 5-MeO-DMT produced both short and long-term improvements in self-reported ratings of satisfaction with life, depression, anxiety and stress. Not only did life satisfaction increase 7 percent one day after the smoke session, the average rate of depression among participants dropped 18 percent below baseline levels, anxiety by 39 percent and stress by 27 percent.

Four weeks later, the authors found that life satisfaction had increased to 11 percent above baseline, while depression ratings had dropped 68 percent. Anxiety and stress were also down 56 percent and 48 percent, respectively. 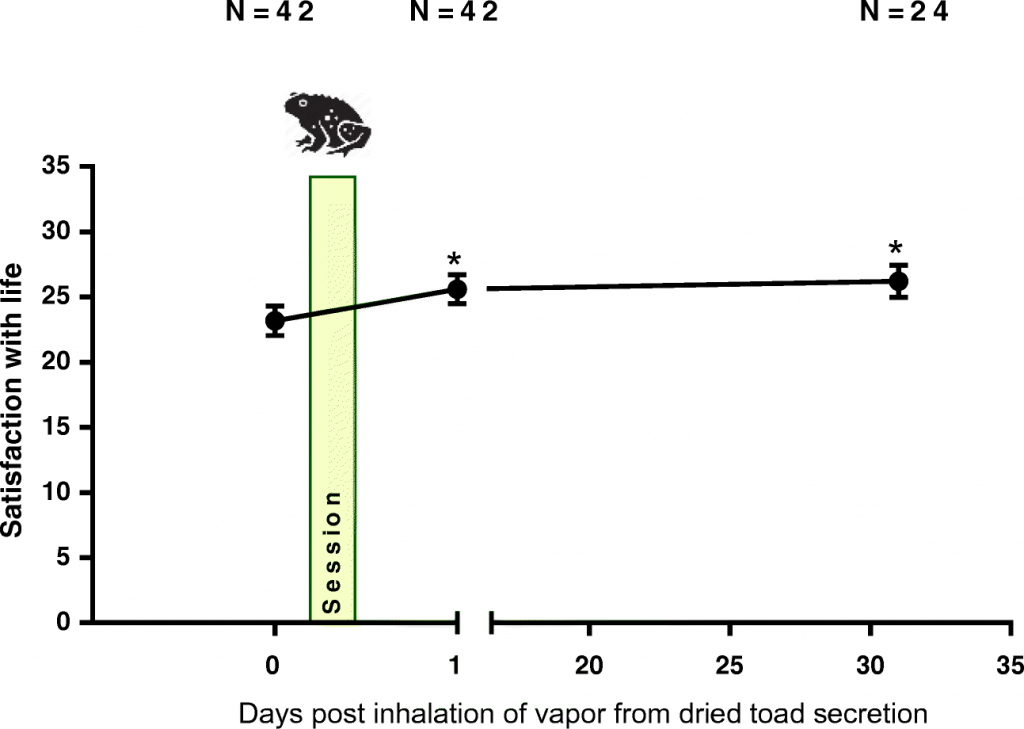 Some participants who had especially intense 5-MeO-DMT sessions reported even greater effects on their moods.

Those who “experienced high levels of ego dissolution or oceanic boundlessness during the session displayed higher ratings of satisfaction with life and lower ratings of depression and stress,” the study found.

Understanding how or why dried toad secretion may help improve symptoms of depression and anxiety was outside the scope of this study. The authors, however, offer a few theories, including the notion that psychedelic compounds such as 5-MeO-DMT may bind to certain receptors in the brain, thus reducing inflammation and improving symptoms associated with some neuropsychiatric diseases, such as depression.

It’s important to point out, however, that one of the study’s limitations was inconsistent participation. Of the 75 participants, 42 completed the test assessments both before inhalation of the dried toad secretion vapor and within 24 hours, while only 24 completed the test battery at the final assessment.

Despite the lack of a proper control group, the results are promising, the authors said. “This study suggests that a single administration of vapor from toad secretion containing 5-MeO-DMT produces rapid and persistent improvements in satisfaction with life, mindfulness and psychopathological symptoms, and that these changes are associated to the strength of the psychedelic experience,” they concluded, adding a call for more research.

The results also support a separate recent study that found a synthetic version of 5-MeO-DMT also appeared to offer therapeutic benefits to those who inhale it. In a survey of 362 adults who said they’d had a mystical experience with 5-MeO-DMT in a group setting, approximately 80 percent reported their anxiety or depression had improved afterward.

Alan Davis, a postdoctoral research fellow at the Johns Hopkins University School of Medicine, was one of the authors on that study, which was published in The American Journal of Drug and Alcohol Abuse in March. “Research has shown that psychedelics given alongside psychotherapy help people with depression and anxiety,” Davis said in a statement. “However, psychedelic sessions usually require 7-8 hours per session because psychedelics typically have a long duration of action. Because 5-MeO-DMT is short-acting and lasts approximately 30-90 minutes, it could be much easier to use as an adjunct to therapy because current therapies usually involve a 60-90 minute session.”