Nevertheless, most of Oregon’s most populous counties and cities have cleared the way for psilocybin production by authorized facilities.

Thousands of voters across Oregon have decided to ban or block the rollout of psilocybin treatment centers.

But two counties bucked that trend: In Deschutes and Jackson counties, voters rejected the proposed bans and chose to move ahead with Measure 109, which passed statewide in 2020 and legalized the limited use of psilocybin in state-regulated treatment facilities. The measure allowed local authorities to opt out of Measure 109 by forwarding to voters either two-year moratoriums or bans on psilocybin services.

Authorities in 27 Oregon counties and 114 cities and towns asked voters to consider two-year moratoriums or bans. Among the latter, only two—Phoenix in Jackson County and Wheeler in Tillamook County—authorized psilocybin services.

But in a call with reporters after the election, Measure 109 supporters said much work remains to ensure access to psilocybin services throughout the state, especially in rural areas. The advocates said education is a key to breaking down resistance.

Sam Chapman of the Healing Advocacy Fund, a nonprofit organization working to roll out psilocybin services throughout the state, said that if people track the research into the hallucinogen and begin to hear “stories of healing right here in Oregon,” they’ll begin to understand the potential benefits of psilocybin. 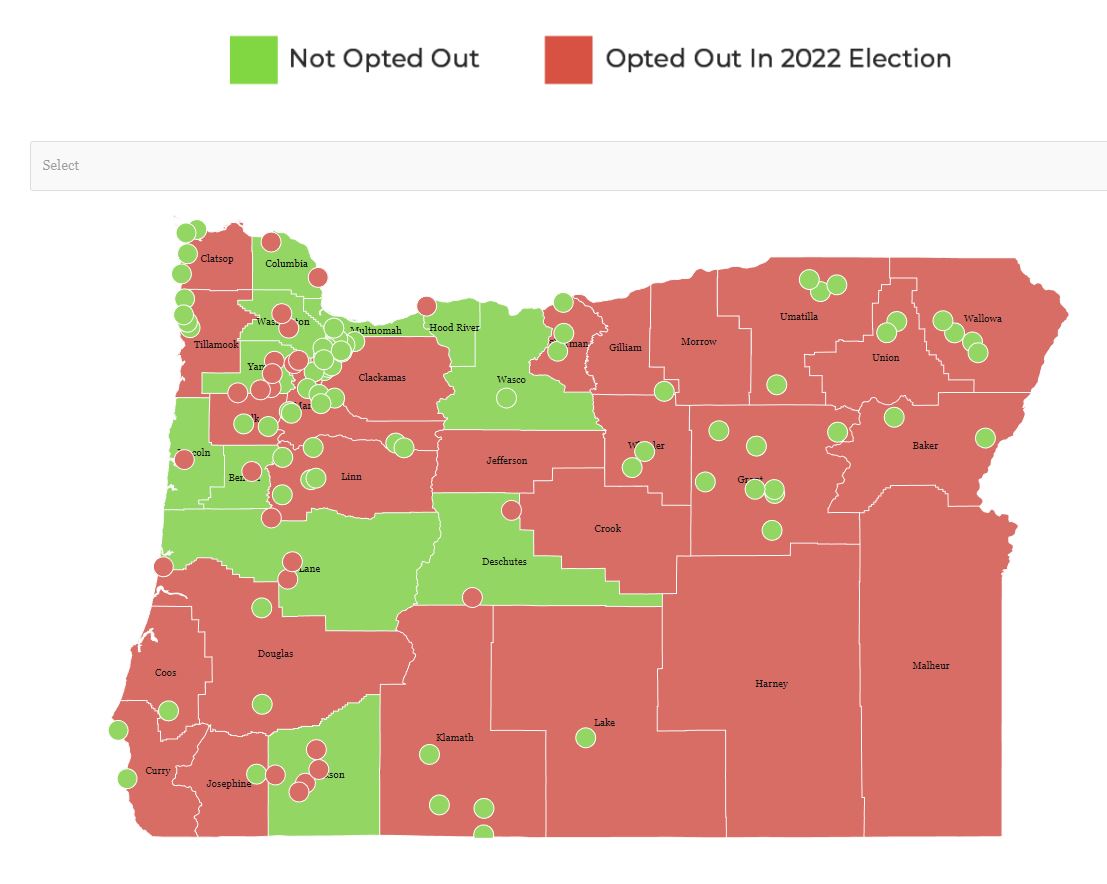 The measure made Oregon the first state to legalize its use, though voters in Colorado also approved the use of psilocybin on Tuesday. In both states, it will be restricted to state-licensed facilities with trained counselors administering the drug. In Colorado, residents will be able to possess and grow psychedelic mushrooms in their own homes. Oregon’s law does not create a market for psilocybin, and possession, consumption and manufacturing of the drug outside licensed facilities will remain illegal.

Backers such as Drew Snyder, a veteran and a mental-health counselor in Jackson County, say psilocybin could aid thousands of Oregonians with mental health conditions who have not been helped by other therapies.

Snyder, who was also on the  call, said he served for more than six years in the Army and was diagnosed with post-traumatic stress disorder at the end of his service.

Department of Veterans Affairs doctors “were doing their best to treat me and providing therapy for me,” Snyder said, prescribing what he called “a grocery bag of medications,” including “medications to treat the side effects of the medications that I was on.”

After learning about psilocybin, he researched it and became intrigued enough to try the hallucinogen. It worked, he said: “It has just been so incredibly healing for me that I knew I had to bring these services to other veterans and to other people experiencing trauma and depression.”

A survey earlier this year by the Oregon Health Authority found that nearly 4,200 people among about 4,400 who responded were interested in seeking treatment for their well-being.

Researchers in Maryland at Johns Hopkins University, which has led psilocybin research in the U.S., have found the drug to be effective against PTSD, depression and anxiety.

Also known as magic mushrooms, psilocybin has long been used recreationally in the U.S. but it comes from Indigenous cultures who’ve used it in sacred ceremonies for hundreds of thousands of years. It comes from certain  types of mushrooms that are indigenous to tropical and subtropical regions of South America, Mexico and the U.S. Only one species, which is also one of the best known—Psilocybe cubensis—will be allowed under rules proposed by the Oregon Health Authority.

Officials in the cities and counties that referred bans and moratoriums to their voters did so for a variety of reasons.

Some said they thought it best to wait two years to see how the program rolls out statewide before allowing psilocybin services in their community.

Some county officials, such as Linn County Commissioner Roger Nyquist, have said they have little faith in the Oregon Health Authority’s ability to establish the rules that are guiding the rollout of the program.

In eastern Oregon’s Wallowa County, Commissioner Susan Roberts has said she and other commissioners worried that psilocybin could add an additional burden to already overworked law enforcement officers who still are coping with the impacts of Measure 110, which decriminalized possession of small quantities of illegal drugs in Oregon. That was a big concern as well for members of the City Council in Philomath, who referred a moratorium to voters—even though voters in that community voted in favor of Measure 109. (The proposed moratorium was approved by Philomath voters in last week’s election.)

Deschutes County Commissioner Phil Chang had lamented the decision by his colleagues to refer a ban to voters in his county, even though they approved Measure 109—and in Tuesday’s election rejected the proposed ban by an even wider margin. Chang, who was also on last week’s call with psilocybin supporters, said the Deschutes County ballot measure was “a significant waste of taxpayer resources and people’s attention.”

Cities and counties that have cleared the way for psilocybin services now must develop local ordinances to govern details such as where the hallucinogen can be produced and where and when it can be administered to patients. Chang noted that a first draft of these rules in Deschutes County would have severely limited the locations where psilocybin services could be accessed: “I am hopeful that my fellow commissioners, after seeing the results of the opt-out ballot measure, will understand that the people in Deschutes County want access to these services, but I can’t guarantee that is going to be the case,” he said.

We’re pleased to see the results in Jackson & Deschutes counties, places where advocates really stepped up to help inform their neighbors about what was at stake in supporting unfettered access to psilocybin therapy. pic.twitter.com/QA8k2ROb4d

Battles over the regulations might occur in other jurisdictions, he said, and added another wrinkle: Planning departments in local governments—the offices charged with writing these local regulations – are short-staffed across the state. He said planning officials in Deschutes County have benefited from working with colleagues in other counties and suggested that counties and cities that are just getting started on rulemaking reach out to jurisdictions that have a head start.

In the meantime, Chapman said, the rulemaking process at the Oregon Health Authority is moving ahead. Beginning in January, facilitators, service centers, testing laboratories and manufacturers can apply to the state for licensing. The Healing Advocacy Fund estimates that manufacturers and testing labs could be certified as early as March and psilocybin service centers could open by mid-2023.

Those centers won’t be opening in eastern Oregon’s Wallowa County anytime soon, but one resident there thinks it might only be a matter of time.

Matt Kurtz, a Wallowa County native, urged county commissioners there not to send a ban to voters. But he wasn’t surprised when they did so—or when voters approved the ban last week.

“I accept that,” said Kurtz, who said psilocybin helped him deal with depression and addiction. “But I think psilocybin therapy is going to be a fundamental tool in the treatment of mental illness.”

This story was first published by Oregon Capital Chronicle.