Amid one of the sharpest economic downturns in state history, Oregon marijuana sales continue to roll along at a healthier-than-normal pace. State budget officials say that shelter-in-place policies and economic stimulus programs have kept marijuana sales “quite strong” during the pandemic so far.

Since March 1, the sales of adult-use marijuana products are up 60 percent compared to a year ago, the state Office of Economic Analysis said in its latest quarterly budget forecast published last week.

“These increases are not only related to the stockpiling consumers did after the sheltering in place policies were enacted,” the report says, “but have continued through April and early May.” 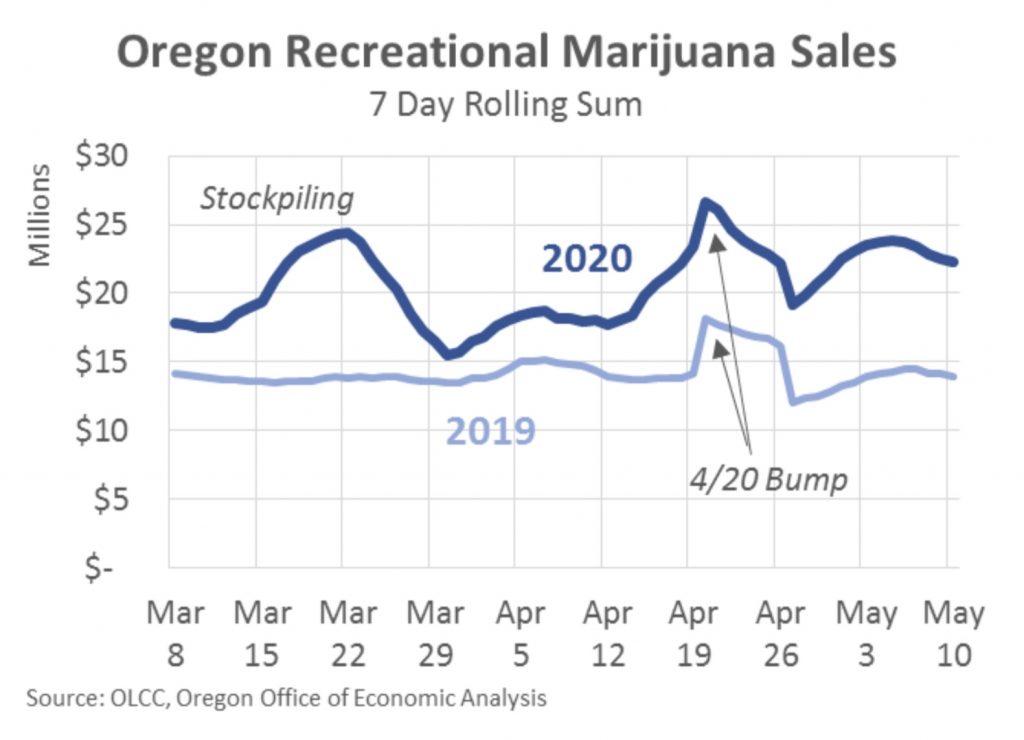 In April alone, consumers bought $89 million worth of legal cannabis products—a record amount—thanks in part to what officials described as a “4/20 bump.” While the boost in sales figures are due in part to rising prices, state budget analysts said that “underlying demand is up as well.”

“The increase in sales for other marijuana products, like concentrates, edibles and the like, are due to significant gains in consumer demand as prices are flat or down,” analysts reasoned.

The June 2020 budget forecast estimates that the current increase in marijuana sales will yield an extra $9 million in state tax revenue during the 2019-2021 budget period. It’s a rare bright spot in the overall budget report, which state analysts described as “the largest downward revision to the quarterly forecast that our office has ever had to make.” 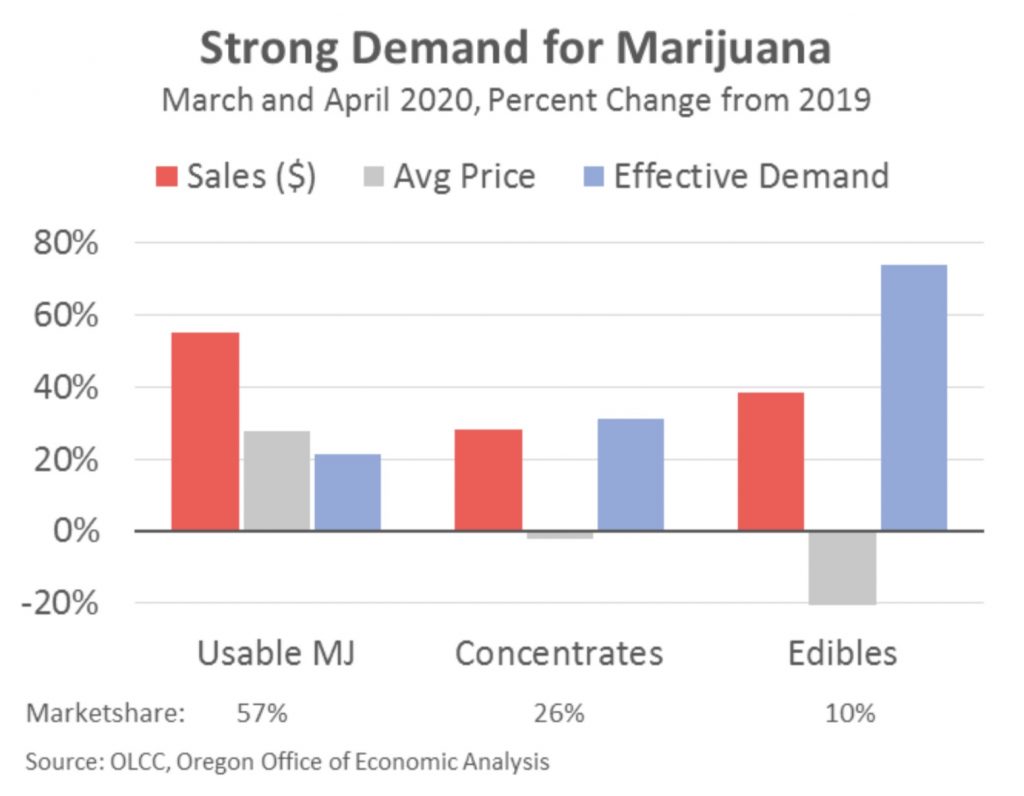 But even the marijuana sector’s boost may be time limited.

“Expectations are that some of these increases are due to temporary factors like the one-time household recovery rebates, expanded unemployment insurance benefits, and the shelter in place style policies,” the report says. “As the impact of these programs fade in the months ahead, and bars and restaurants reopen to a larger degree, marijuana sales are expected to mellow.” 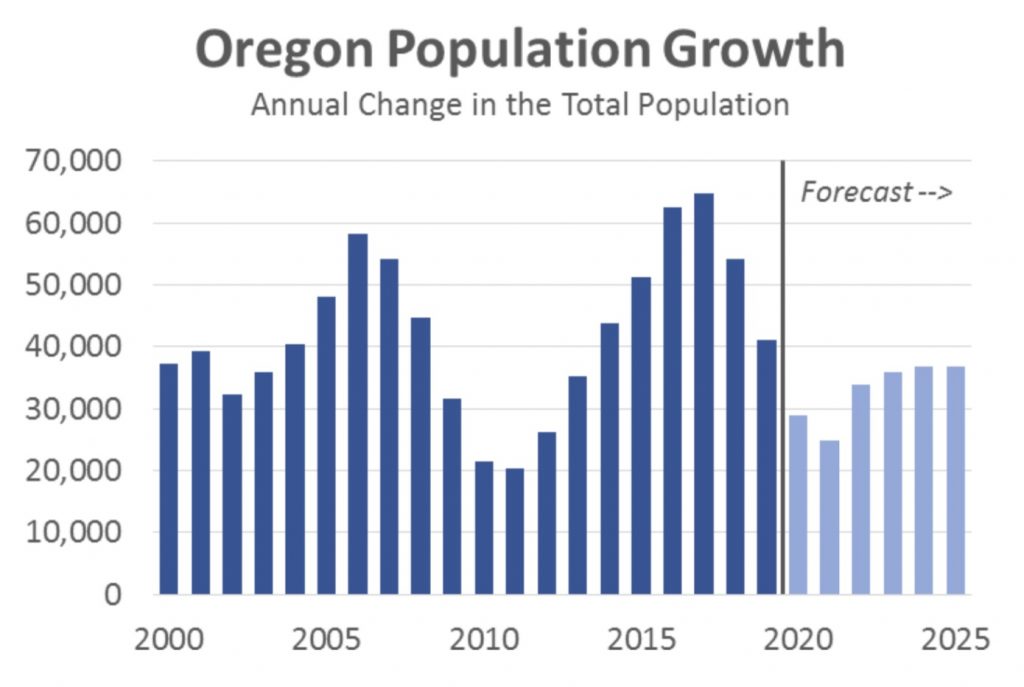 The projected slowdown in sales isn’t expected to make an impact until the next budget period, beginning in 2021. At that point, the forecast says, sales will begin trending down by 5 percent relative to the current period “due to the lower economic outlook” associated with COVID-19.

The pandemic has also changed how Oregonians are making marijuana purchases, the report found, though perhaps not as much as one might expect. The share of sales completed by delivery services more than doubled in recent months, but it remained relatively small, making up just 1.4 percent of total sales. As the Office of Economic Analysis observed, “Consumers still prefer to shop in store.”

Oregon is one of a handful of states looking to legal cannabis sales to help buoy tax revenues. A report published last month by cannabis regulators in Michigan, where legal sales to adults began this past December, forecasts annual marijuana sales in that state to top $3 billion as the market matures. That would mean another 13,500 jobs and roughly $500 million per year in taxes to state coffers. Factoring in the effects on peripheral businesses, the state found, the “total economic impact is estimated to be $7.85 billion with a total impact on employment of 23,700.”

Although tax revenue from cannabis sales will help pad budgets in many legal states, the Oregon report doesn’t mince words: The pandemic’s hit to the state’s economy will be drastic. Oregon’s current recession is “the deepest on record with data going back to 1939,” according to state analysts, and it hit with virtually no warning. “The path looks more like what happens to economic activity during a labor strike or in the aftermath of a natural disaster.” 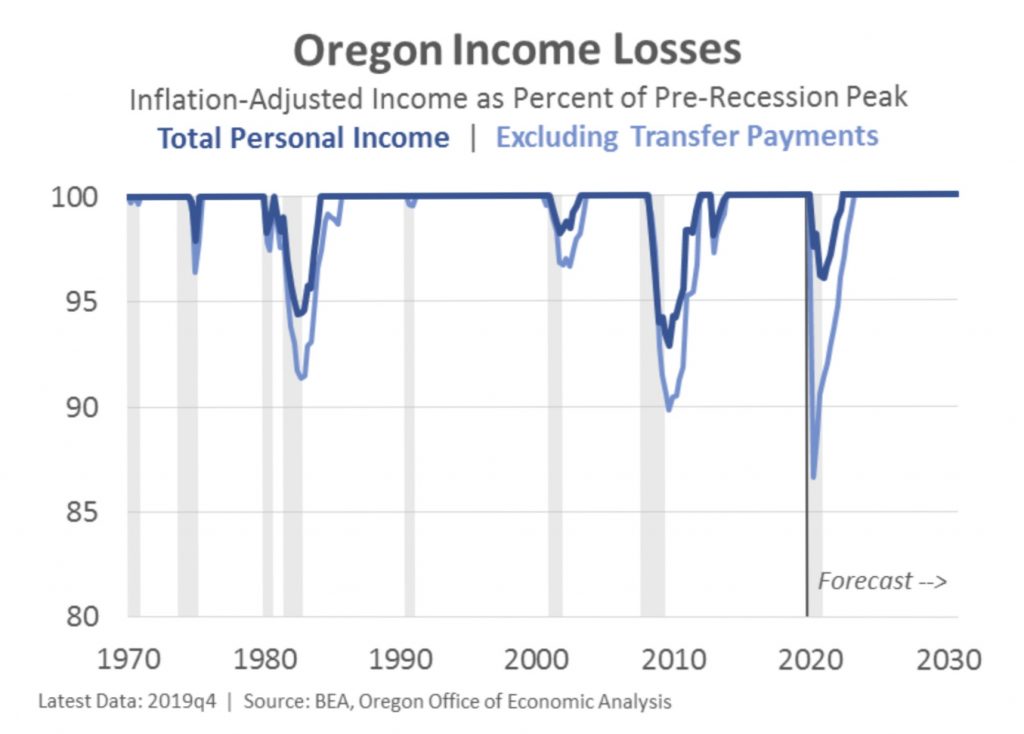 For its part, Oregon’s Office of Economic Analysis predicts a relatively swift recovery. “While this recession is extremely severe, it is expected to be shorter in duration than the Great Recession,” analysts wrote. “The economy should return to health by mid-decade.”