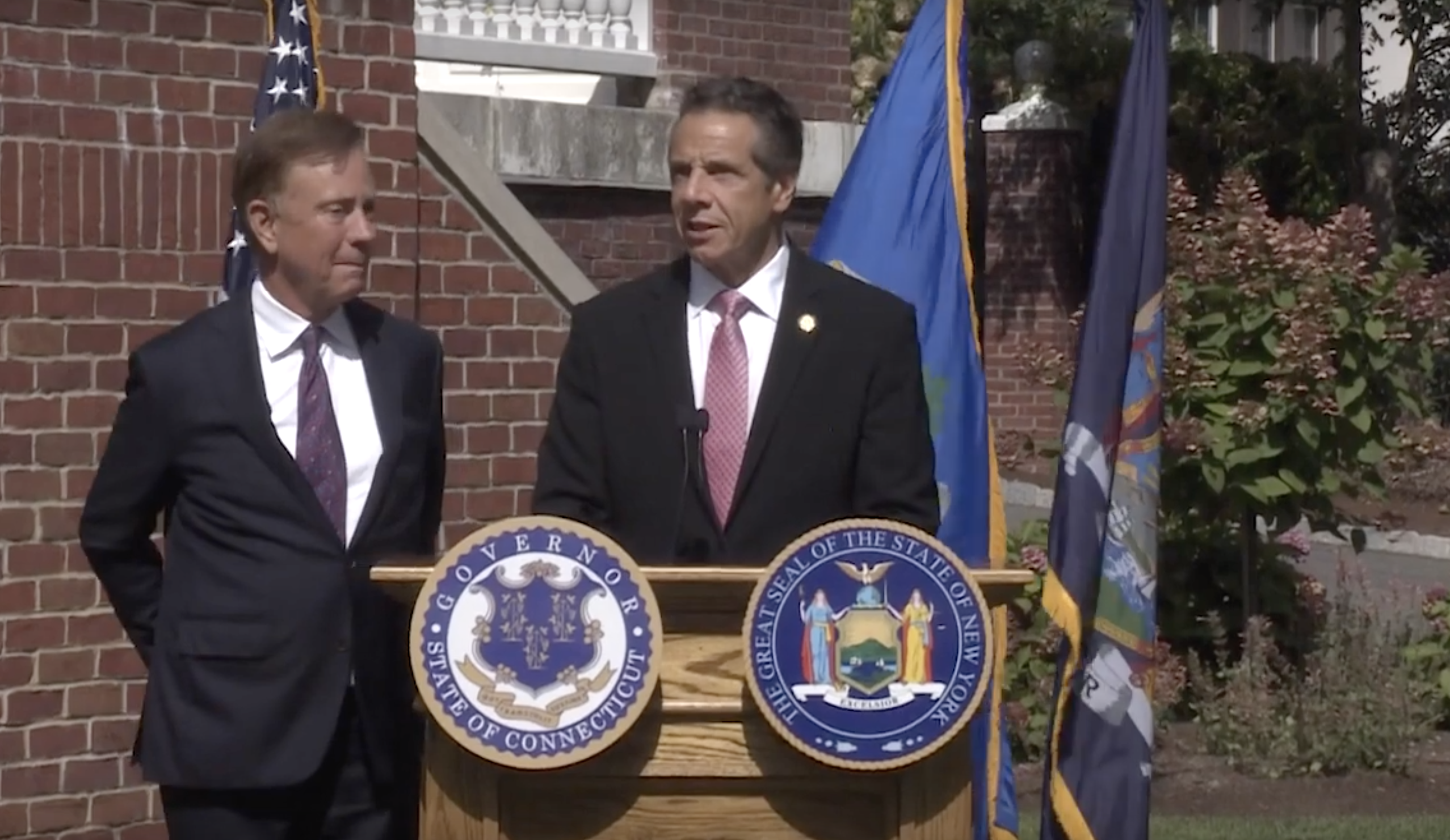 New York Gov. Andrew Cuomo (D) revealed on Wednesday that he will be meeting with governors from throughout the region next month to coordinate marijuana legalization plans.

Cuomo and Connecticut Gov. Ned Lamont (D) made the announcement following a meeting in which they discussed how to ensure there’s consistency among cannabis programs that various neighboring states are working to enact. The pair said federal inaction on the issue has forced states to take the lead but that it’s also important to avoid a patchwork approach among states in the region.

“We can do more together than we can working alone,” Cuomo said. “We don’t have a federal government, in my opinion, that is providing leadership on these issues. They’re saying to the state, ‘you are on your own,’ and that’s liberating on one level.”

Utilizing a partnership between Connecticut and NY, our states are developing a uniform approach to recreational marijuana and e-cigarettes. On 10/17, we will host a summit to develop guidelines on these issues.

The more that states work together, the better the results will be. pic.twitter.com/lxVQJEjPgx

“If we are on our own, let’s hook our boats together and let’s see if we can find our way through this storm,” he said. “The devil is gonna be in the details and how you do it will determine the success of the program. Doing that collectively and regionally makes sense.”

To that end, Cuomo said they’re going to gather “regional partners” for a meeting on October 17 to “talk that through.”

He said the goal is to have a proposal ready by January so that he can include it in his State of the State address to propose to New York lawmakers.

We're announcing a joint partnership to develop a coordinated approach on e-cigarettes and recreational marijuana. We'll continue that conversation at a summit in October.

NY & CT are better off when we work together. pic.twitter.com/vpVj12HdJ1

“Hopefully we can come up with some common premises for the program,” he said of efforts to coordinate with fellow governors. “We won’t agree on everything—we’re not supposed to. We’re supposed to represent the people of our respective states.”

Lamont said he and Cuomo talked about working together “state by state, perhaps with our neighboring states in Rhode Island and New Jersey and beyond, on marijuana regulation and now vaping.”

“The idea that each state does its own thing, this little patchwork of different rules and regulations, different qualities in terms of public safety and public health—Governor Cuomo really has been forceful in saying this is something we want to do together,” he said.

Crafting policies on recreational marijuana and vaping makes much more sense as a region. A patchwork of laws won't be effective when you can go over the border to a state with a totally different policy. I thank @NYGovCuomo for working with us on these public health issues. pic.twitter.com/Ixn9hsvXXO

We want to do it in a timely basis,” he said. “We don’t want to give up marijuana to the black market—we’ve seen how dangerous that can be—and come up with our public safety regulations and other rules. If we can do that together going forward, I think that would be a priority for both of us.”

“The states are stepping in and filing a void left by the federal government,” Lamont said. “That’s why we’re taking the lead on a lot of these issues.”

Cuomo similarly initially voiced his desire to coordinate marijuana legalization plans in radio interviews on Tuesday, stressing that he didn’t want consumers to be traveling across state borders for products because of differences in things like prices or product availability.

Other issues the governors plan to address include age restrictions, THC content restrictions, tax rates, packaging requirements and impaired driving. They also talked about expungements for prior cannabis convictions and how to distribute marijuana tax revenue.

Several states in the Northeast have pursued legalization this year, with a bill passing in committees in Connecticut but failing to get a full vote in the legislature. Cuomo spent months negotiating with lawmakers about a legalization bill in his state, but those talks did not ultimately produce passable legislation.

Pennsylvania Governor Comes Out In Support Of Marijuana Legalization