New York regulators on Thursday voted to grant conditional marijuana cultivation licenses to a number of hemp businesses as one of the first steps toward ensuring an adequate supply of cannabis when the state’s adult-use market launches later this year.

And separately, the Cannabis Control Board (CCB) approved revised regulations to allow medical marijuana patients to grow their own plants for personal use following a public comment period on initial rules that were proposed last year.

It’s been about a year since an adult-use legalization bill was enacted into law, and regulators have spent months preparing for implementation. At CCB’s meeting on Thursday, members approved 52 conditional cultivation licenses. More than 150 applications had been submitted, and remaining applicants will continue to be reviewed on a rolling basis. 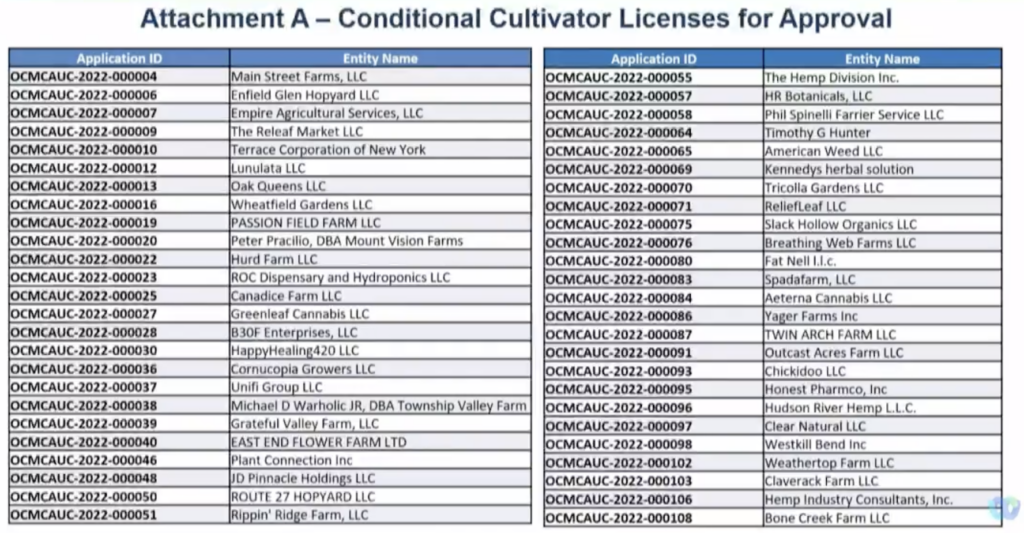 Gov. Kathy Hochul (D) signed a bill from Assembly Majority Leader Crystal Peoples-Stokes (D) and Sen. Michelle Hinchey (D) to create conditional licenses in February. The intent is to allow existing hemp operators to get a head start on growing marijuana to meet demand for the forthcoming industry.

“New York’s farms have been the backbone of our state’s economy since before the American Revolution, and now, New York’s farms will be at the center of the most equitable cannabis industry in the nation,” Hochul said in a press release on Thursday. “I’m proud to announce the first adult-use cannabis cultivation licenses in the state, and I’m proud of the work the Office of Cannabis Management and the Cannabis Control Board are doing to get adult-use cannabis sales up and running as fast as possible without compromising our mission to uplift communities and individuals most impacted by the past century of cannabis prohibition.”

Conditional cultivator licensees needed to have been authorized by the state Department of Agriculture to grow hemp as of December 31, 2021—and have grown the crop for two of the past four years. They’re also required to “participate in an environmental sustainability program and a social equity mentorship program.”

Meanwhile, regulators also advanced a rule last month to make it so people with prior marijuana convictions, or whose family members have been harmed by criminalization, will get the first round of adult-use marijuana retailer licenses—ahead of existing medical cannabis businesses. A recent poll found that most New Yorkers voters are against that proposal.

The licensing development is one part of what the Hochul administration is calling the “Seeding Opportunity Initiative,” which she also announced last month.

Office of Cannabis Management (OCM) Executive Director Chris Alexander said that he expects upwards of 200 “justice involved” applicants to receive the priority licenses under the proposal, with retailers potentially coming online by the year’s end.

Advocates are separately encouraged by the approval of a new revised rule providing a home grow option for medical marijuana patients. After filing the initial regulations late last year, the proposal was amended and is now generally more lax on restrictions.

But with input from the public, regulators made certain changes in the latest iteration, initiating a new 45-day public comment period. For example, it now clarifies that plants can be grown outdoors, but they must still be enclosed and not visible to the public.

It also removes language requiring that patients and caregivers grow marijuana “in a reasonable manner that prioritizes attempts at mitigating cannabis odor.”

Another previous provision stipulating that patients should install and maintain security devices to prevent underage people from accessing the plants was removed.

With respect to caregivers, the new rule clarifies that they can grow for up to four patients and would be permitted to have a maximum of 12 plants for those patients at any one time.

Landlords would be able to refuse to lease to or penalize tenants “if failing to do so would cause the landlord to lose a monetary or licensing related benefit under federal law or regulations” under the newly proposed rule.

Meanwhile, New York lawmakers recently sent a budget proposal to the governor’s desk that includes provisions to let marijuana businesses take state tax deductions that are available to other industries despite an ongoing federal ban on cannabis.

As it stands, adults 21 and older can possess and publicly consume cannabis, as well as gift marijuana to other adults as long as they aren’t being compensated. But regulators are still finalizing licensing rules, and there are currently no retailers that are authorized to sell cannabis for adult use in the state.

The governor released a State of the State book in January that called for the creation of a $200 million public-private fund to specifically help promote social equity in the state’s burgeoning marijuana market. That funding, called the “New York Social Equity Cannabis Investment Program,” is the last component of the Seeding Opportunity Initiative.

Enacting legislation that expedites licensing could help the state reduce the number of businesses that are effectively using the legal “gifting” provision of the state’s marijuana law to give away cannabis for “free” if a non-marijuana-related purchase is made.

New York regulators recently issued warnings to more than two dozen businesses that they allege are either illegally selling marijuana without a license or exploiting the “gifting” component.

Here are some other ways that New York lawmakers and regulators are working to build upon the legalization law as the state prepares to implement retail sales:

In February, for example, a state senator filed a bill that would promote recycling in the marijuana industry once retail sales officially launch.

Hinchey is also sponsoring that legislation, which would require cannabis shops to apply a $1 deposit for any marijuana products sold in single-use plastic containers and also reimburse consumers for that fee if they return the container.

The senator is also behind a separate bill filed last year that would prioritize hemp-based packaging over synthetic plastics for marijuana products.

The state Department of Labor separately announced in recent guidance that New York employers are no longer allowed to drug test most workers for marijuana.

Meanwhile, as New York prepares the launch of its adult-use marijuana market, OCM announced a significant expansion of the existing medical cannabis program.

Now doctors will be able to issue medical marijuana recommendations to people for any condition that they feel could be treated by cannabis, rather than rely on a list of specific eligible maladies.

Separately, the mayor of New York City says he’s looking into the idea of authorizing marijuana to be grown in greenhouses on the rooftops of public housing buildings—an ambitious proposal that’s unlikely to sit well with the federal government, which provides funding to support the NYC Housing Authority (NYCHA).

U.S. Attorney General Would Be Required To Create Marijuana Commission To Advise On Legalization Under New Bipartisan Bill