A majority of American mayors want marijuana to be legalized and sold in their cities.

That’s according to a new poll released on Tuesday by Boston University.

Fifty-five percent of mayors in the survey agreed with the statement that “marijuana should be legalized, regulated and legally sold in your city.”

Only 35 percent disagreed with the idea of allowing cannabis sales in the cities they govern.

“Many mayors suggested that their views on marijuana were less about philosophy or values and more about practical challenges related to policy implementation,” the survey’s organizers said in summary of the key findings.

That said, the results showed a stark partisan divide on marijuana among the municipal elected officials.

While 62 percent of Democratic mayors were on board with legalization, only 25 percent of Republicans agreed. Meanwhile, less than a quarter—22 percent— of Democrats holding mayoral offices oppose ending cannabis prohibition, while more than two-thirds—67 percent of GOP mayors say they are against it. 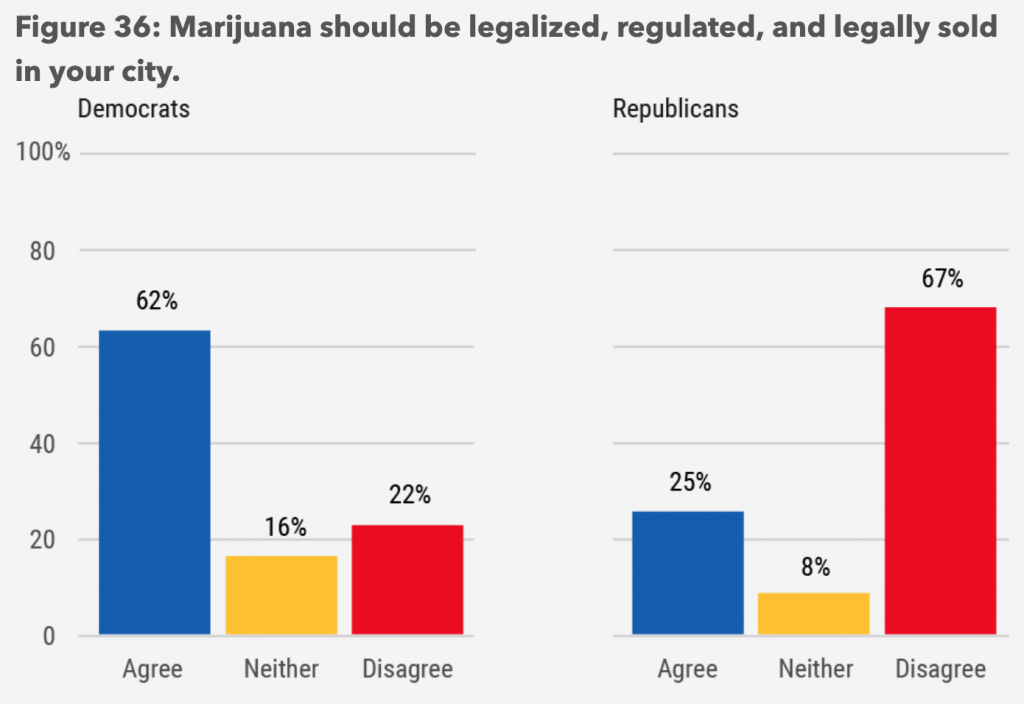 The survey polled 110 mayors to generate a representative sample of those running U.S. cities with populations over 75,000.

The U.S. Conference of Mayors has for several years supported resolutions calling on the federal government to end prohibition and respect state and local marijuana laws.

At its conference last year, for example, it approved a measure calling on Congress and the Trump administration to “immediately remove cannabis from the schedule of the [Controlled Substances Act] to enable U.S. federal banking regulators to permanently authorize financial institutions to provide services to commercial cannabis businesses, and increase the safety of the public.”

Another resolution approved by the group of mayors last year highlights the racially “discriminatory enforcement” of cannabis prohibition and “calls on local governments, where marijuana has been legalized, to act, moving with urgency to vacate misdemeanor marijuana convictions for conduct that is now deemed legal.”

Mayors From Across U.S. Call On Feds To Deschedule Marijuana