Next year, Oregon voters could decide on a ballot initiative to legalize the medical use of psilocybin and otherwise reduce penalties for possessing and growing mushrooms containing the hallucinogenic compound. According to a new poll, a slim plurality of voters are in favor of the proposal.

But the survey also found that support grows significantly when parts of the proposed measure are clarified, as opposed to just reading voters the officially approved ballot title alone. That suggests a well-funded public education campaign by the measure’s organizers could be well positioned make history by making Oregon the first state in the country to legally allow the use of federal Schedule I drugs beyond marijuana.

Oregon’s attorney general certified the ballot language of the Psilocybin Service Initiative, which is being spearheaded by the Oregon Psilocybin Society (OPS), in November. The group still needs to collect about 140,000 valid voter signatures on a petition to qualify the measure for the 2020 ballot, and the new polling data will likely help with fundraising to support the effort.

When participants were only given the ballot title, 47 percent said they favored the measure, 46 percent opposed it and seven percent were undecided.

But then the pollsters provided participants with questions that summarized the two main aspects of the measure.

When the question was phrased this way, support jumped to 64 percent.

2. “Do you support or oppose reducing existing criminal penalties for the unlawful manufacture, possession, and delivery of psilocybin?”

Fifty-four percent said they support this part of the measure. 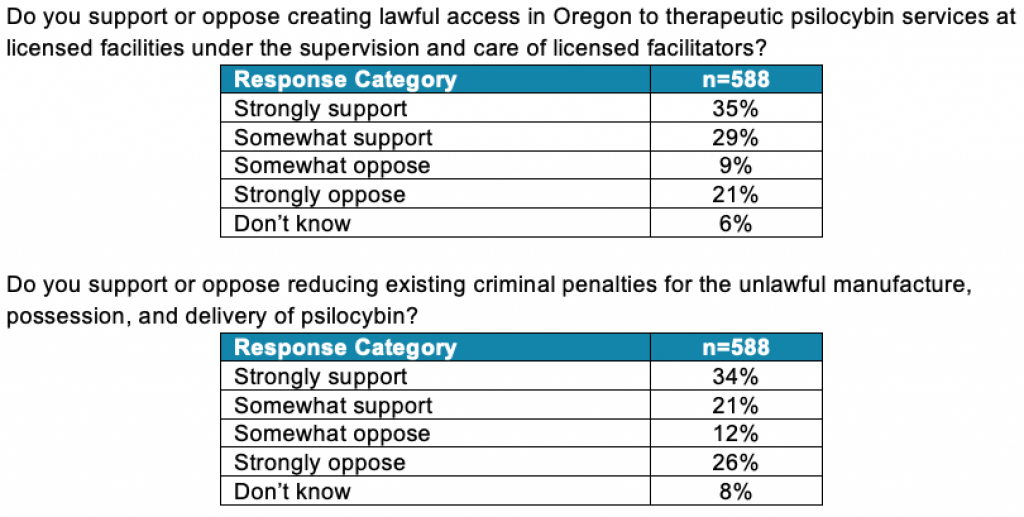 “These early polling numbers demonstrate that the campaign is indeed viable and that the possibility of success is real. But we have our work cut out for us,” OPS co-founder Tom Eckert told Marijuana Moment. “Support rises significantly when people know what is actually in the initiative, which means that educating the public is critical.”

The survey also listed a number of arguments in favor of the measure, asking respondents to pick the three they found most compelling. The most commonly chosen responses were that psilocybin can treat end-of-life anxiety and depression, replace many treatments “pushed by Big Pharma companies” and help individuals suffering from addictions like alcoholism.

Interestingly, in spite of how the substance is often portrayed in popular culture, only six percent thought the idea that psilocybin can “offer a mystical-type experience which often leads to lasting change” was a particularly compelling argument. Similarly, the notions that psilocybin services “can help restore our broken relationship with nature” or “can help support personal growth” also did not seem to move a large number of voters.

Only seven percent said that psilocybin can help people quit smoking, while several studies have demonstrated that effect. 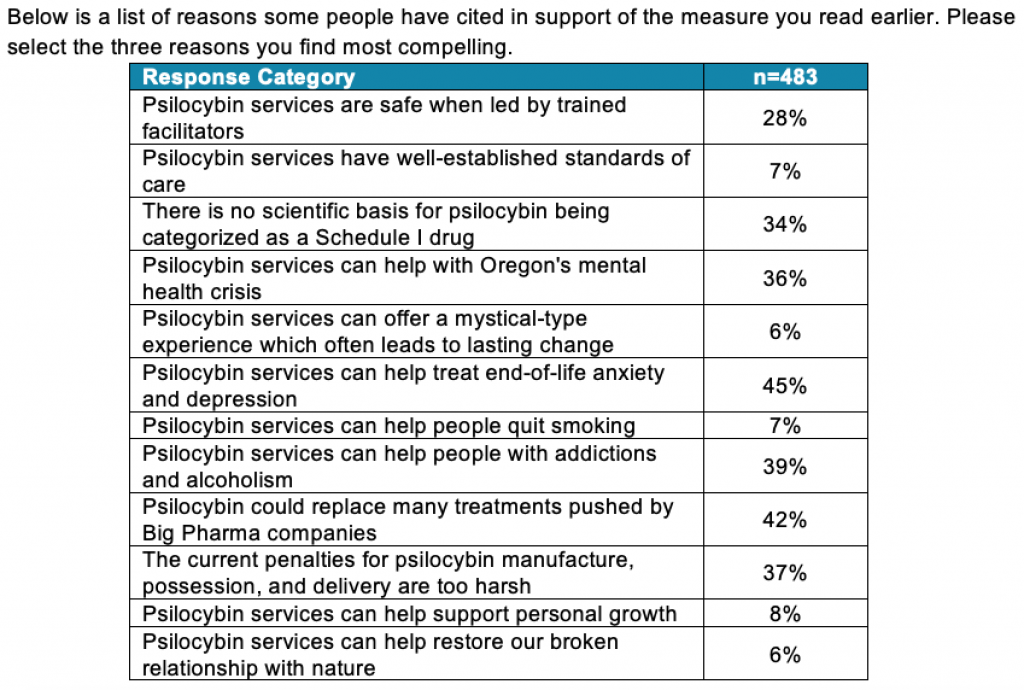 OPS recruited DHM Research to conduct the online survey, which involved 618 registered voters. The margin of error was +/- 4.9 percentage points.

Increasingly, there’s chatter among drug reform advocates that the fungus-derived psychedelic could follow a similar track as marijuana. Both substances have research-backed therapeutic potential and pose a relatively low health risk.

Separate from the statewide Oregon effort, a Denver-based group is also working toward reform and submitted signatures for a psilocybin decriminalization initiative earlier this month.