Oregon officials have certified the ballot title for a proposal to let licensed medical professionals administer psilocybin, the main active ingredient in psychedelic mushrooms, for therapeutic purposes. If approved by voters, the state would be the first in the U.S. to allow legal use of the substance, marking a major milestone in the drug policy reform movement.

The title certification is the final step before the campaign is able to start collecting signatures to qualify the measure for the November 2020 ballot. In a newsletter announcing the certification on Monday, the Oregon Psilocybin Society (OPS) said it had to “fight for neutral and accurate wording” from the state attorney general’s office, but that the group is now “generally satisfied with the final wording” for the summary of the measure, which would also reduce criminal penalties for psilocybin-related offenses.

There will be a short waiting period before the campaign can obtain the forms to collect signatures. But once they have them, it’ll be all hands on deck. The group needs to collect about 140,000 valid signatures from registered voters to qualify for the ballot.

At this point it’s not clear where Oregonians stand on psilocybin, but OPS contracted a research firm to survey voters on the issue, with findings expected to be released late next month.

***CAMPAIGN UPDATE*** The Psilocybin Service Initiative of Oregon has been titled! In December PSI will begin gathering the 140K signatures to get it on the 2020 ballot. Learn how YOU can support this historical campaign from anywhere on earth by visiting https://t.co/SSctPRz10r. pic.twitter.com/WriRHrquSl

While much of the drug reform movement has focused on marijuana legalization in recent years, there’s a smaller but growing call from advocates to loosen restrictions on psilocybin. Studies indicate that the compound can be benefit to people with certain mental health conditions such as depression and addiction.

The Oregon measure, called the Psilocybin Service Initiative, would establish a new program through the state Health Authority that would authorize licensed facilitators to produce, process, deliver, possess and administer psilocybin in a clinical setting. It would also reduce most criminal penalties for unlicensed psilocybin activities.

Here’s the official ballot title as approved by the Oregon attorney general: 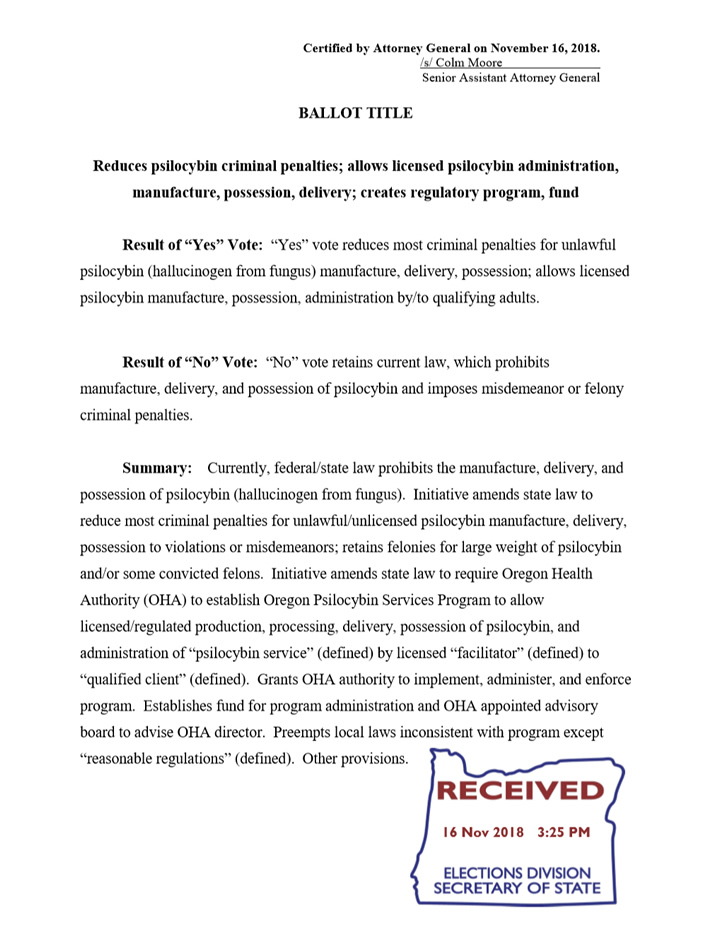 “We’re excited to gather signatures in support of establishing a community-based service framework, in which licensed providers, along with licensed producers of psilocybin mushrooms, can blaze new trails in Oregon in accordance with evolving practice standards,” OPS co-founder Tom Eckert said in a September press release.

A campaign based in Denver is also hoping to get psilocybin decriminalized locally. City officials cleared the initiative in October, and organizers have until January 7 to collect about 4,700 signatures to qualify for the ballot. In California, a similar measure failed to qualify for the 2018 statewide ballot.