The number of banks that report working with marijuana businesses ticked up again near the end of 2021, according to newly released federal data.

It’s not clear if the increase is related to congressional moves to pass a bipartisan cannabis banking reform bill, but the figures from the Financial Crimes Enforcement Network (FinCEN) signal that financial institutions continue to feel more comfortable servicing businesses in state-legal markets.

As of September 30, 2021, there were 755 banks and credit unions that had filed requisite reports saying they were actively serving cannabis clients. Thats up from 706 in the previous quarter and from a previous peak of 747 in late 2019. 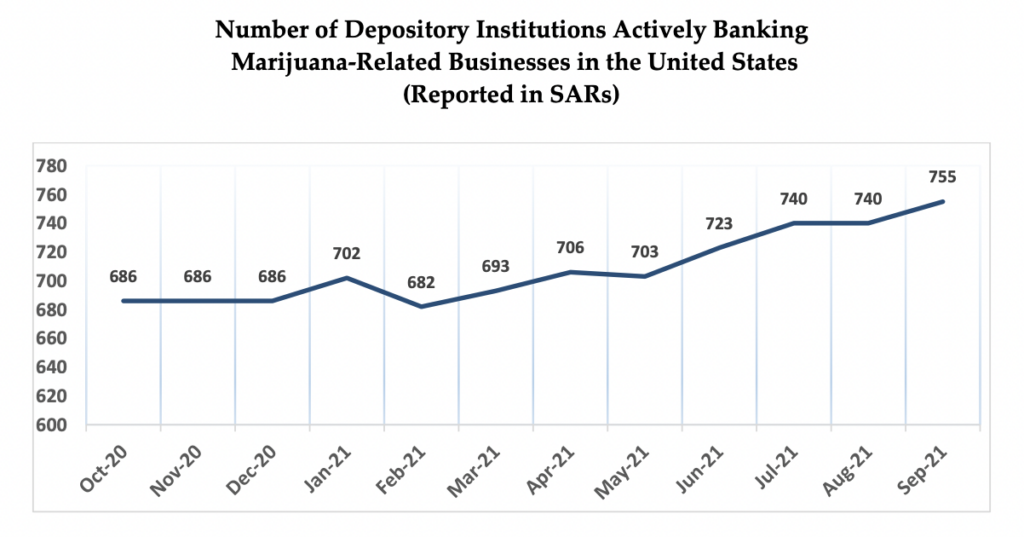 While there’s 2014 FinCEN guidance in place meant to help financial institutions navigate the space, lawmakers want to enact clear, statutory protections. And that would be accomplished through bipartisan legislation known as the Secure and Fair Enforcement (SAFE) Banking Act that’s cleared the House in some form six times now.

Until then, there’s still reluctance within the banking sector when it comes to servicing businesses that work with a Schedule I controlled substance, and that’s reflected in the relatively low number of depository institutions that actually follow the guidance and take on cannabis clients.

The year 2020 saw a significant and consistent drop in the number of banks and credit unions that reported having marijuana accounts, but those figures began to stabilize last year.

Past reports from the agency had noted that it stopped including hemp-only businesses in its quarterly reports since the crop was federally legalized under the 2018 Farm Bill, which could account for at least some of the drop depicted in earlier data, but that language does not appear in this latest report.

Also, FinCEN, which is part of the Treasury Department, didn’t mention the potential impact of the coronavirus pandemic on marijuana banking trends this time.

As of the end of September 2021, there were 533 banks and 202 credit unions reporting active marijuana clients, according to the federal agency. 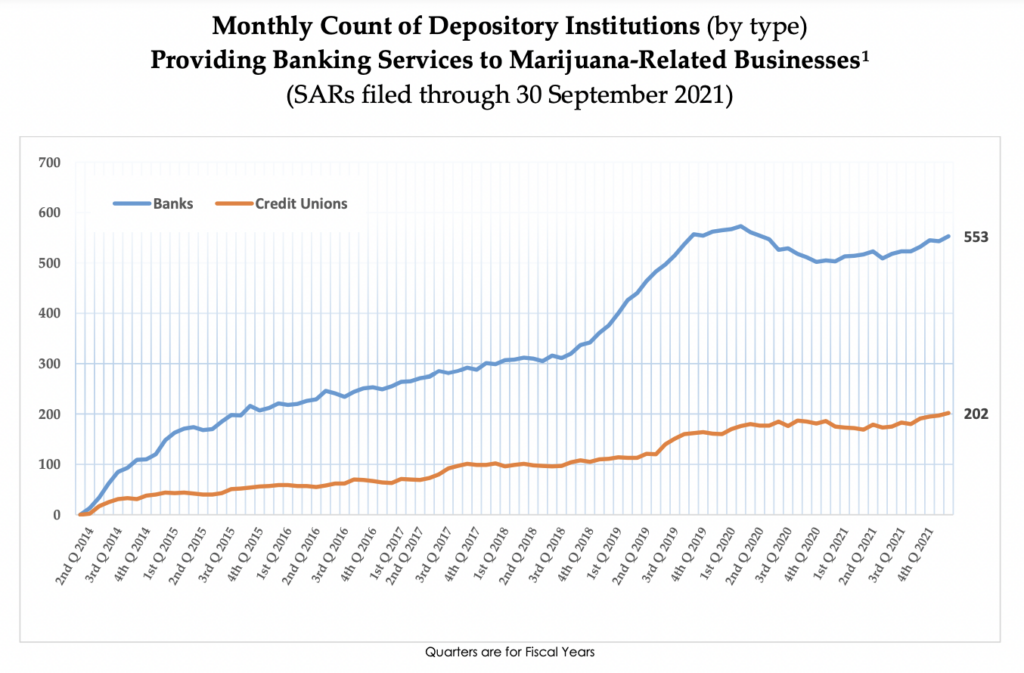 While the SAFE Banking Act has enjoyed strong bipartisan support in the House, it’s stalled in the Senate under both Republican and Democratic control. Senate leadership has insisted that comprehensive legalization should advance first, though Majority Leader Chuck Schumer (D-NY) has more recently signaled openness to passing a banking bill if certain equity provisions are attached.

For his part, Rep. Ed Perlmutter (D-CO), sponsor of the SAFE Banking Act, says he’s “confident” that the opposite chamber will finally take up the reform before he retires at the end of the session.

Meanwhile, some Republicans are scratching their heads about how Democrats have so far failed to pass the modest banking reform with majorities in both chambers and control of the White House, too. For example, Rep. Rand Paul (R-KY) criticized his Democratic colleagues over the issue in December.

In the interim, federal financial regulator Rodney Hood—a board member and former chairman of the federal National Credit Union Administration (NCUA)—recently said that marijuana legalization is not a question of “if” but “when,” and he’s again offering advice on how to navigate the federal-state conflict that has left many banks reluctant to work with cannabis businesses.