Legalizing marijuana has little to no impact on rates of violent or property crime, according to a new study that was funded by a federal agency. The policy change did seem connected to a long-term decline in burglaries in one state, however.

The study, published in the journal Justice Quarterly and funded by the federal National Institute of Justice, found that violent and property crimes rates were not affected in a statistically significant way in the years after Colorado and Washington State became the first in the nation to legalize marijuana for adult use.

“Our results suggest that marijuana legalization and sales have had minimal to no effect on major crimes in Colorado or Washington,” the paper concluded. “We observed no statistically significant long-term effects of recreational cannabis laws or the initiation of retail sales on violent or property crime rates in these states.”

The study authors explicitly cited claims made by prohibitionist group Smart Approaches to Marijuana and author Alex Berenson as being contradicted by their findings.

To determine the impact of legalization, researchers designed experimental models that compared crime rates in Colorado and Washington to those in 21 non-legal states from 1999 to 2016. The analysis was based on FBI data on violent, property, aggravated assault, auto theft, burglary, larceny and robbery crime rates.

Following legalization, there were one-time increases in property crime in the two states, as well as a spike in aggravated assault in Washington, but those did not reflect long-term trends, “suggesting that if marijuana legalization influenced crime, it was short-lived,” the study authors wrote. 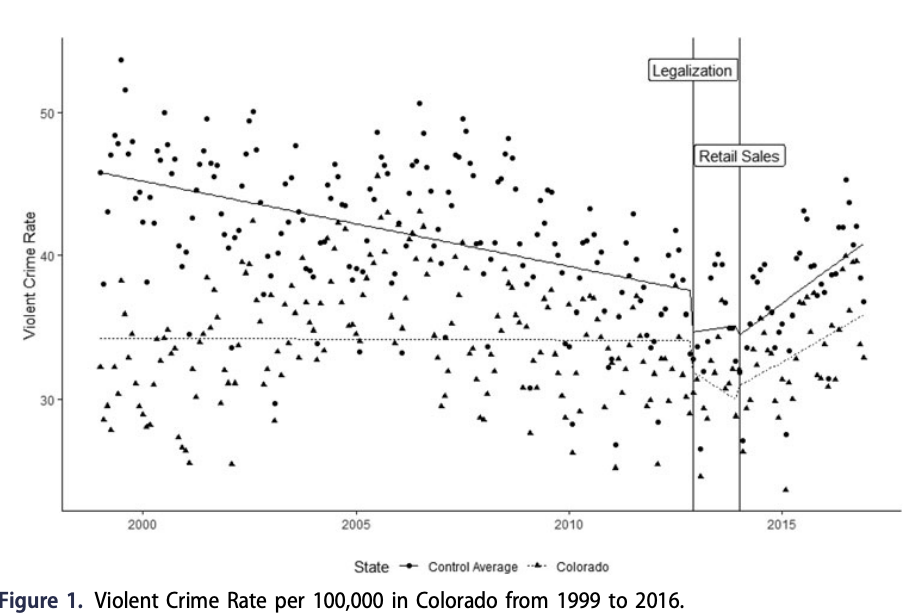 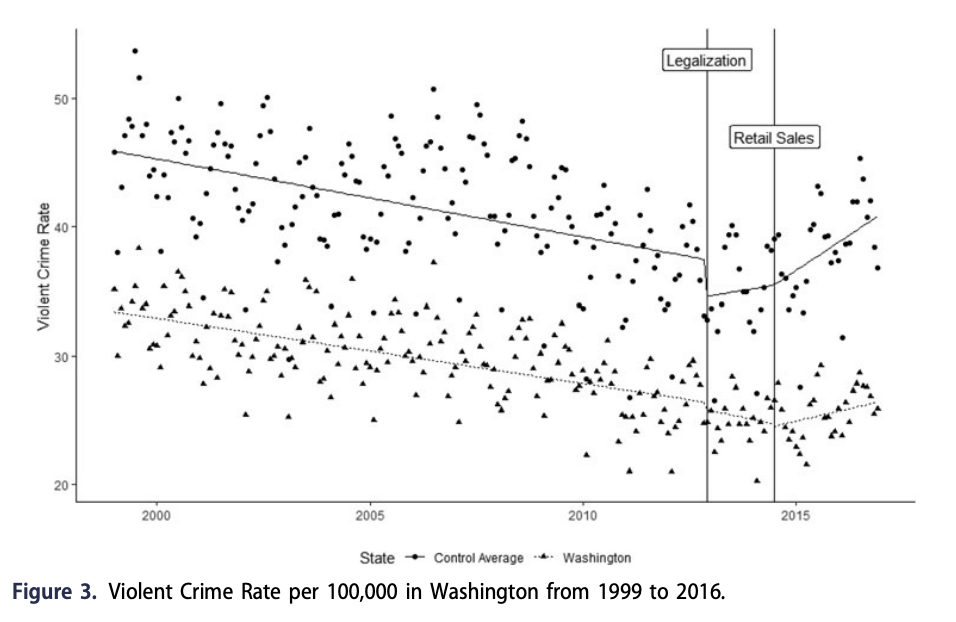 There was one statistically significant long-term impact that the researchers did attribute to state marijuana laws: The burglary rate in Washington decreased, and that trend has held. 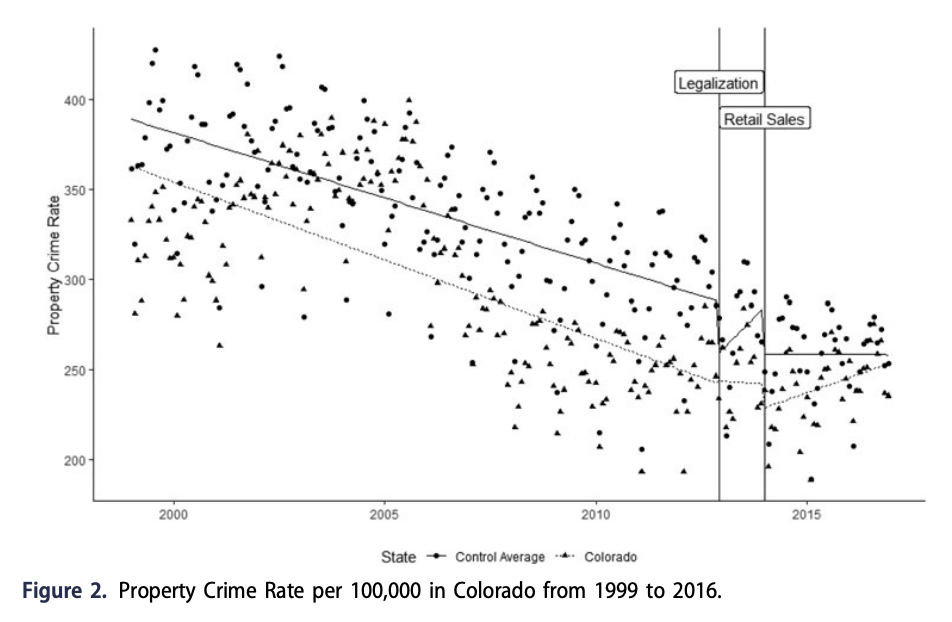 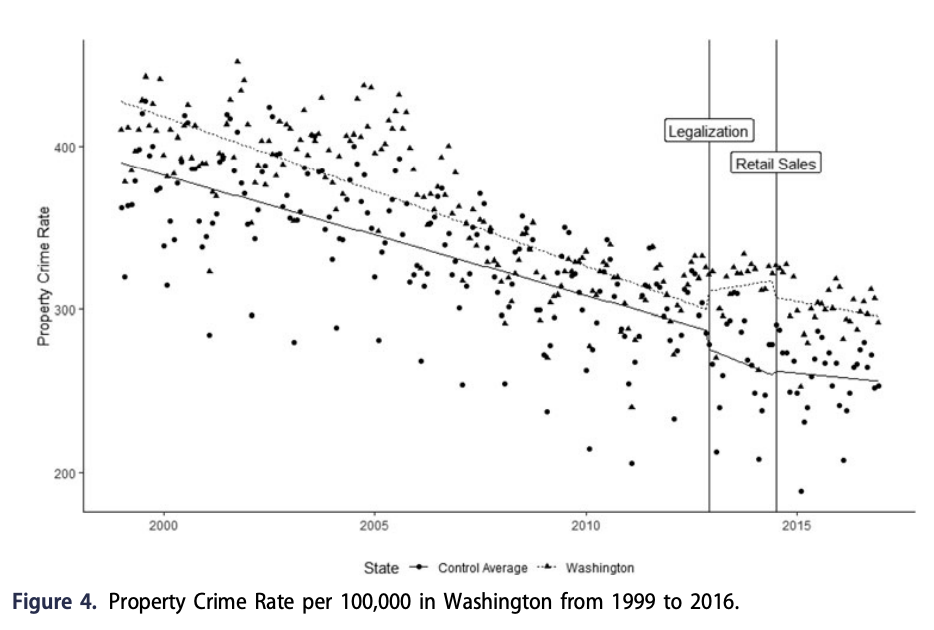 It’s not immediately clear why that is the case, and the study’s conclusion encourages future research that replicates and refines the design used for this experiment to solve answered questions.

“In summary, our results suggest that there may have been some immediate increases in crime at the point of legalization, yet there have been essentially no longterm shifts in crime rates because of legalization, aside from a decline in Burglary in Washington. Though the short-term increases might appear to suggest that marijuana increased crime, we caution against this interpretation as the increases do not reflect permanent shifts (that is, these are shifts in intercepts, not slopes) and could be artificially induced by the small number of time units between legalization and sales.”

Dale Willits, a study coauthor, said in a press release that in light of the “nationwide debate about legalization, the federal classification of cannabis under the Controlled Substances Act, and the consequences of legalization for crime continues, it is essential to center that discussion on studies that use contextualized and robust research designs with as few limitations as possible.”

“This is but one study and legalization of marijuana is still relatively new, but by replicating our findings, policymakers can answer the question of how legalization affects crime,” he said.

Study authors also noted that their analysis did not take into account other crimes such as drug impaired driving.

“Given the likelihood of further liberalization of state and even federal marijuana laws, it is imperative that policy makers and research funders allocate the necessary resources to conduct these more rigorous and intensive types of contextualized studies,” they concluded. “Large-scale policy shifts can take a considerable amount of time to produce stable and understandable effects.”

This is the second recent study that’s received Justice Department funding and arrived at a conclusion that runs against the logic of prohibition. Another example looked at the impact of legalization on law enforcement resources and trafficking trends.