As Louisiana lawmakers continue to advance a variety of marijuana reform bills, two new polls—including one personally commissioned by a top Republican lawmaker—show that a majority of voters are in favor of the broadest proposal: legalizing cannabis for adult use.

The first survey, released on Thursday by the University of New Orleans (UNO), found that 55 percent of state voters back legalizing recreational marijuana, compared to 36 percent who oppose the policy. 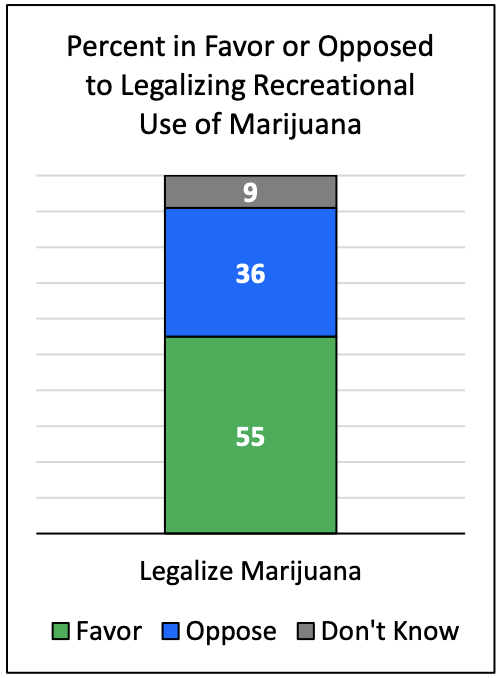 Meanwhile, House Speaker Pro Tempore Tanner Magee (R) said on Friday that he paid to have a cannabis poll conducted in his own district.

“With all the discussion on marijuana legalization, I thought it was important to learn where my constituents were on the issue before we vote,” he said in a Twitter post.

The results show overwhelming support for legalization, with 75 percent of people in Magee’s district backing legalizing cannabis. That includes 73 percent of Republicans, he said.

With all the discussion on marijuana legalization, I thought it was important to learn where my constituents were on the issue before we vote so I commissioned an independent poll of my district.

Other than pulling out the support of GOP voters, the lawmaker didn’t provide any other demographic breakdowns and he didn’t reveal details about the survey’s methodology.

Meanwhile, a demographic breakdown in the statewide UNO poll revealed trends that are more in line with previous polling on legalization. Younger people and those who identify as Democrats are the most likely to favor ending prohibition, with 68 percent of those 18-35 and 66 percent of Democrats saying the state should legalize. By contrast, 38 percent of those 65 and older and 44 percent of Republicans said they support the reform proposal. 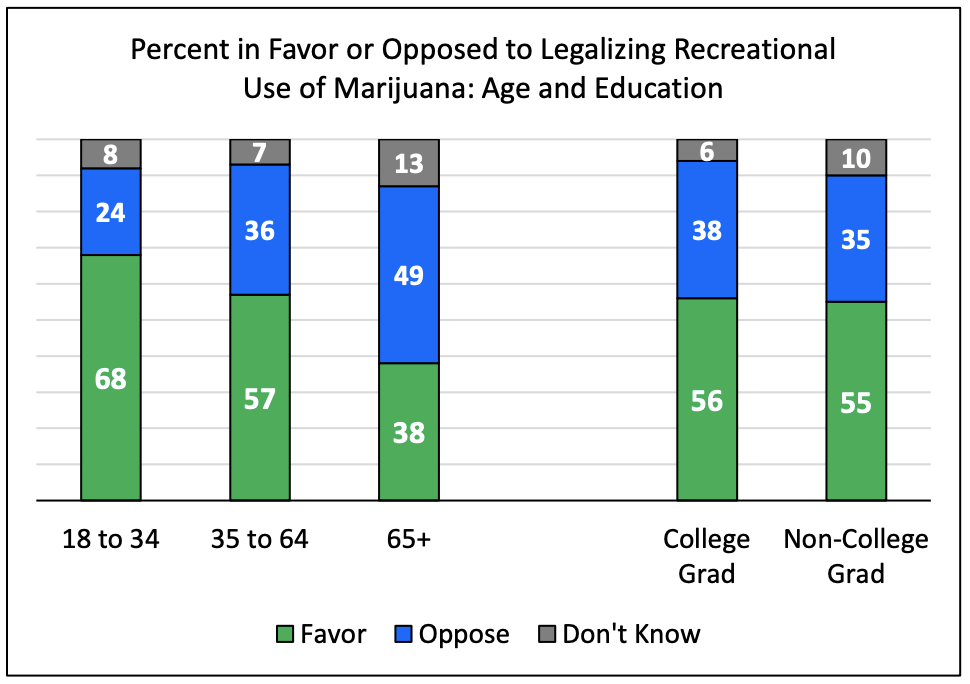 There were nominal differences in levels of support between genders, education levels and income. 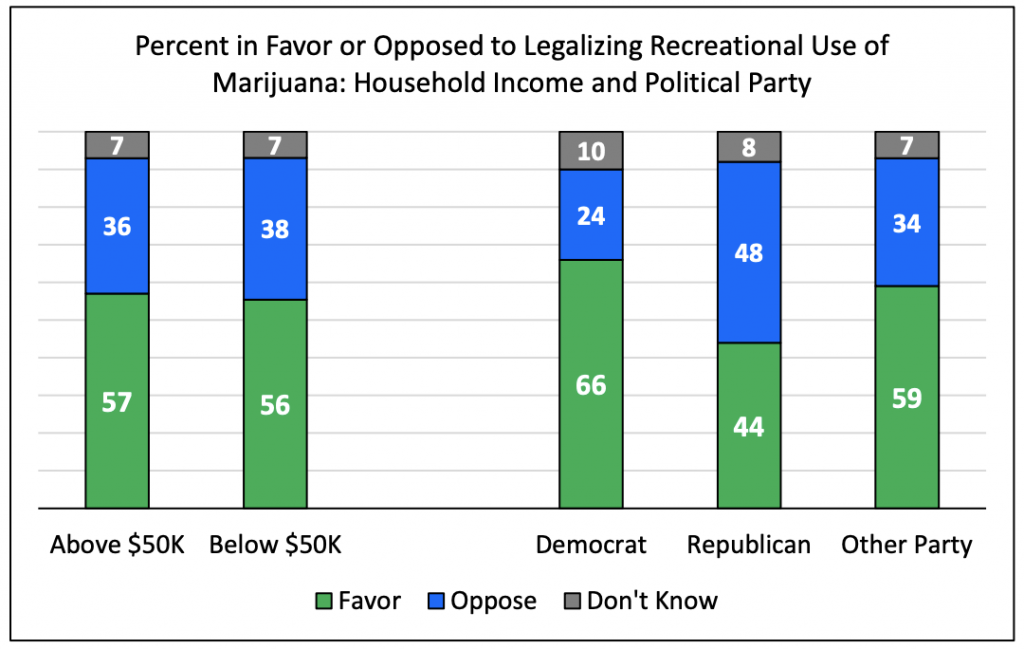 A majority of voters in five out of six congressional districts in the state said they favor legalizing adult-use cannabis. 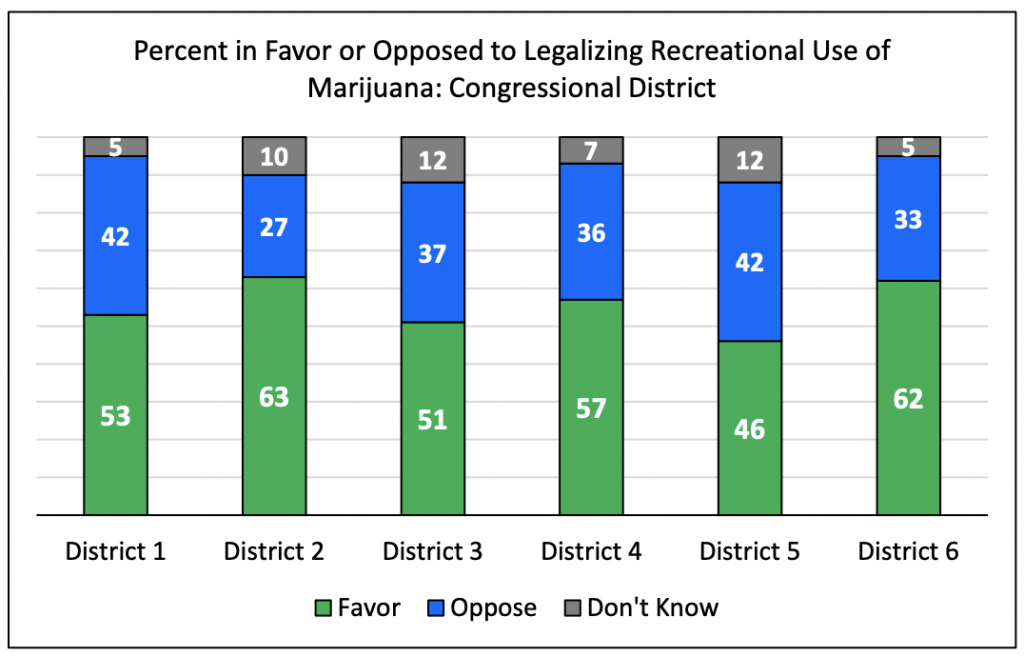 The poll, which involved interviews with 692 registered voters from April 26-28, comes as Louisiana legislators are dedicating significant attention to a slew of marijuana reform measures.

On Thursday, the House Judiciary Committee approved a bill to impose fees and set up a marijuana business licensing system if legalization is enacted, while another measure to bring the state’s hemp program up to speed with federal regulations also advanced.

The former measure will only take effect if a separate bill to legalize cannabis in the state is enacted. That legislation, sponsored by Rep. Richard Nelson (R), was approved by the House Administration of Criminal Justice Committee on Tuesday and is heading to the floor.

It would allow adults 21 and older to purchase and possess marijuana from licensed retailers. Possession of up to two and a half pounds of cannabis would be lawful. Regulators would be tasked with creating a permit for adults to grow up to six plants for personal use.

Sponsored by House Speaker Clay Schexnayder (R), the bill covers a lot of ground, but it’s primary function is to align Louisiana’s hemp program with the federal rules for the crop that were finalized and took effect under the U.S. Department of Agriculture last month.

The governor of Louisiana said on Tuesday that he has “great interest” in the legalization legislation, which represents a notable departure from his typical dismissive response to questions about the policy change.

“As I almost always do, I will take a look at the bill as it arrives on my desk and see what it contains and what amendments have been added to it,” the governor said. “I’m not going to speculate now on that, but I do have great interest in that bill and what it says, especially if it does make it up to the fourth floor. I’ll take a look at it at that point and then make sure that you all know exactly how I feel about it.”

Last year, the legislature significantly expanded the state’s medical marijuana program by passing a bill that allows physicians to recommend cannabis to patients for any debilitating condition that they deem fit instead of from the limited list of maladies that’s used under current law.