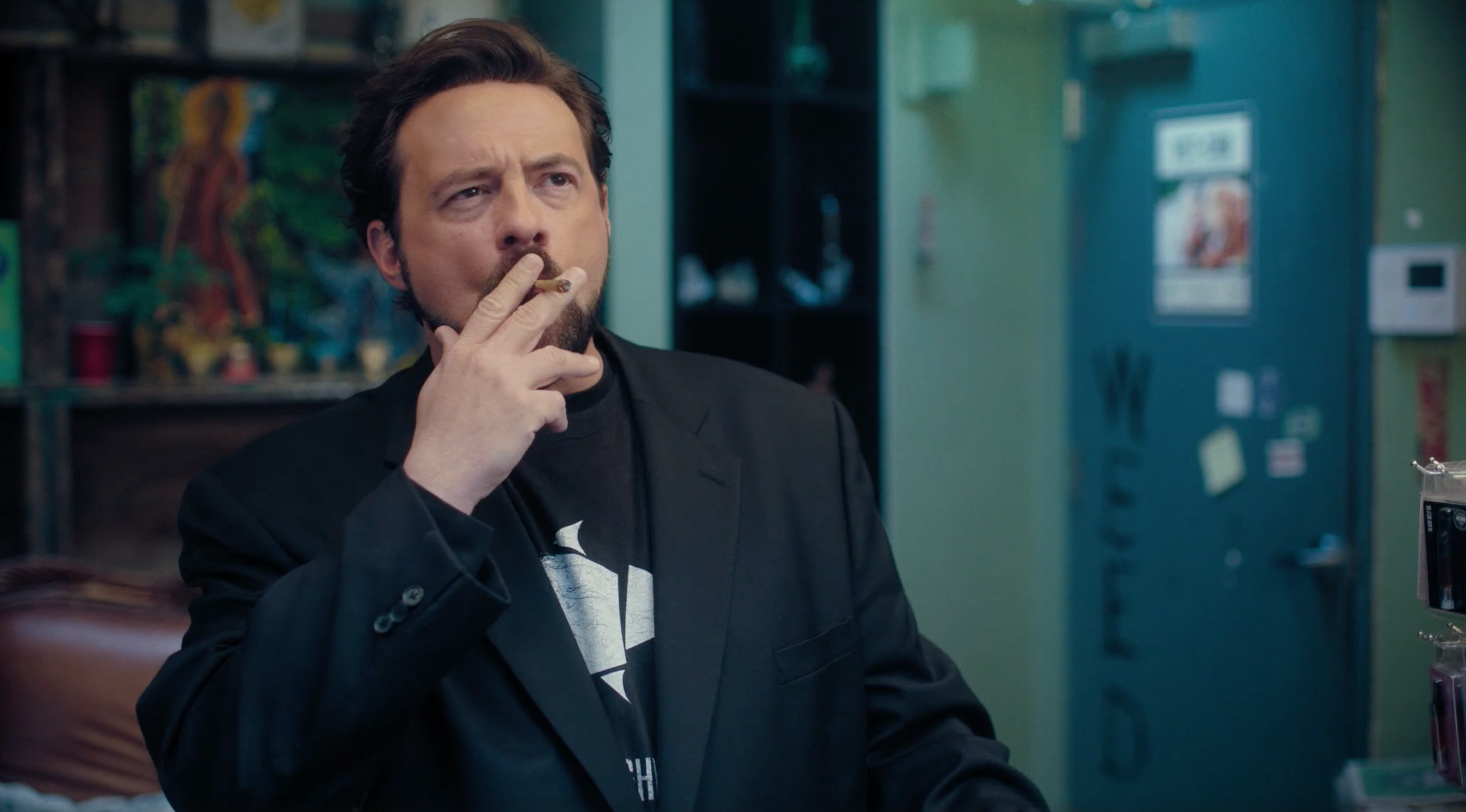 Kevin Smith loves weed. This we know to be true. Continually mentioned in his films and podcasts, the man is a fan of the plant. It’s also, according to his doctor, “probably” the reason he survived a recent heart attack earlier this year. So of course he was going to make a TV show about it.

Described as “Clerks in a weed store”, Hollyweed stars Smith in a rare dialogue-rich role as Pete and former Chappelle’s Show actor Donnell Rawlings as Nipsy, as growers and dispensary operators. Their shop? LA Confidential Caregivers based in, you guessed it, Hollywood.

The show started production a few years ago but the pilot never found a home. Initially turned down by networks, most likely because Netflix’s marijuana show Disjointed was in production, the pilot is now being hosted at Rivit TV. A new platform for media makers, fans get to watch the pilot for free then bid on what they’d pay per episode for the whole season. They’re only charged if the show meets its goal by the deadline.

Unfortunately, that’s likely the most interesting thing about Hollyweed. The storyline is twisty enough to keep you watching, but the rolling-paper-thin plot just barely supports it. A few of the jokes warrant laughs even through the sometimes rigid delivery and pacing. But with movie and comic book references abounding, and Smith’s longtime collaborator Jason Mewes making an appearance (in a questionable portrayal of a person experiencing homelessness), it still has that Kevin Smith flavor.

The show has some fun with the cannabis industry; I’ll give it that. Renaming low quality bud so it appears attractive: funny, but most likely not based in reality. Nipsy smokes a few joints inside the dispensary throughout the episode. We get it—he likes to smoke. The three ounces he grabs for the delivery looks more like three slightly dirty freezer bags. Even this small detail was disappointing; I guess I expected more from a fellow consumer like Smith. They toss stems out into the dumpster behind the shop; a move that nearly shut down a dispensary in Alaska in real life. And “compassionate care” means feeding nearly-expired edibles to Rolo, the person living next to the dumpster played by Mewes. It’s not totally clear if these are riffs on industry stereotypes or a surreal, alternate universe.

It is clear, though, that Smith has never worked a day in a dispensary. But if you were the guy that made Clerks and Mallrats, would you?

Similar to, though far more palatable than, the poorly written and executed Disjointed, Hollyweed isn’t a show for people who are living in the cannabis industry every day. I’m not sure it’s for people who really enjoy marijuana, either. But it’s the show Kevin Smith wanted to make, and like Yoga Hosers and Tusk, he really doesn’t care what people think. He’s just happy to have made it.

Correction: An earlier version of this article stated Rivit TV was a crowdfunding platform. Fans do not donate money, but commit to paying a price per episode and are only charged if the series reaches its goal.