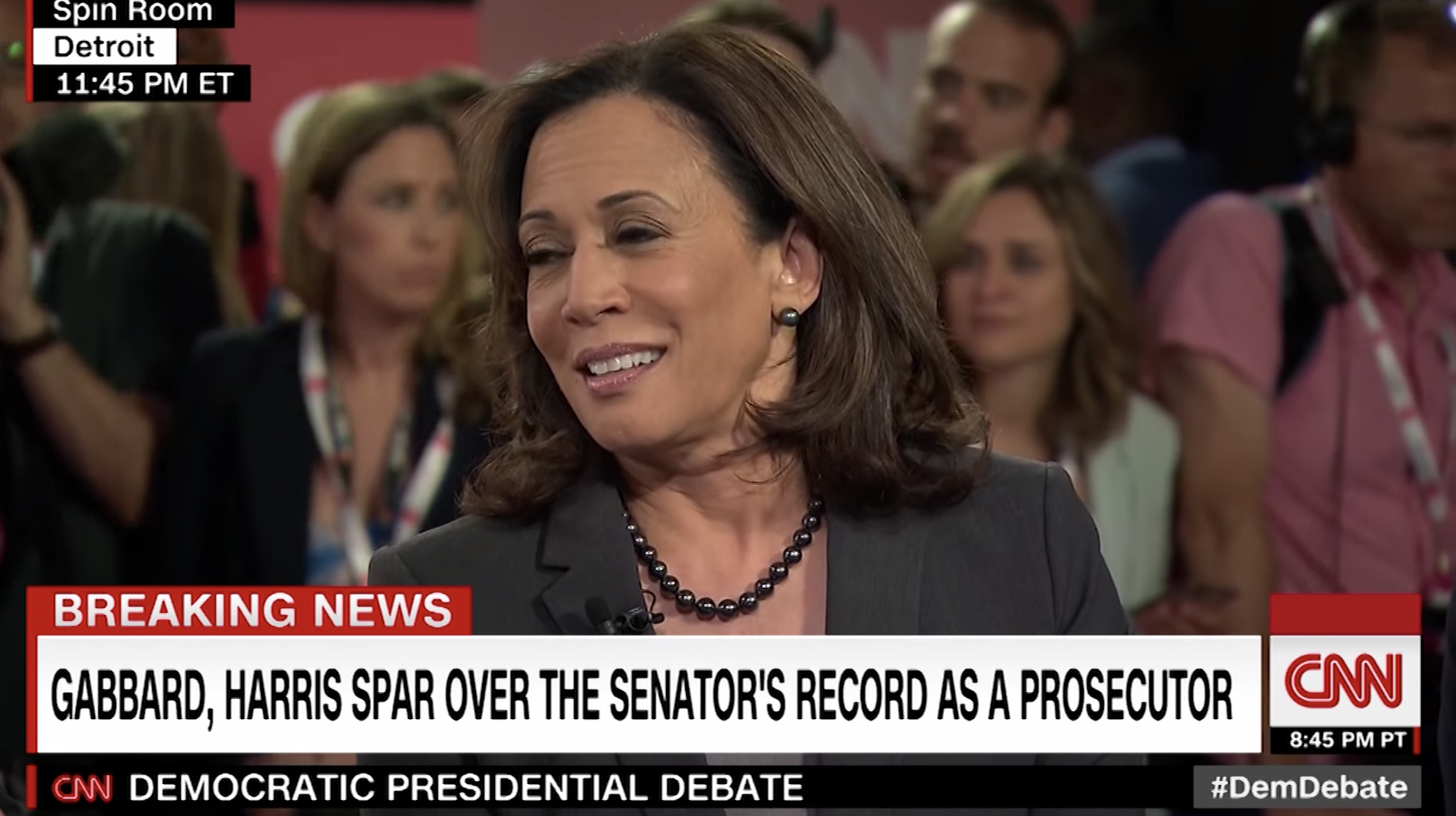 Sen. Kamala Harris (D-CA) dismissed criticism of her record as a prosecutor who jailed marijuana offenders and later joked about her own cannabis consumption on Wednesday, refusing to respond to an attack that Rep. Tulsi Gabbard (D-HI) laid during the Democratic presidential debate.

During a post-debate interview on CNN, host Anderson Cooper played a clip of Gabbard saying she’s “deeply concerned about this record,” referring to Harris’s time as California’s attorney general.

“There are too many examples to cite, but she put over 1,500 people in jail for marijuana violations and then laughed about it when she was asked if she ever smoked marijuana,” Gabbard said, drawing applause.

(PolitiFact said it couldn’t immediately verify the number of cannabis cases tried while Harris was attorney general but noted that she would not have been the one to personally prosecute those individuals, with lower-level state attorneys instead handling the cases.)

Rather than directly address the criticism, Harris said after the debate that she wasn’t surprised by the attack and that she doesn’t take her opponent’s opinion seriously for unrelated reasons.

“This is going to sound immodest, but I’m obviously a top tier candidate and so I did expect that I would be on the stage and take hits tonight because there are a lot of people that are trying to make the stage for the next debate,” Harris said. “Especially when people are at zero or one percent or whatever she might be at. I did expect that I might take hits tonight.”

Then she said that Gabbard is an “apologist for [Syrian President Bashar al-Assad], who has murdered the people of his country like cockroaches.”

“She who has embraced him, been an apologist for him in a way that she refuses to call him a war criminal. I can only take what she says and her opinion so seriously,” the California senator said.

“And so I’m prepared to move on,” she said, without adding a single word of substantive response to the congresswoman’s criticism of her cannabis record.

Ian Sams, national press secretary for Harris’s campaign, previewed his boss’s take with a tweet during the debate, writing, simply, “Yo, you love Assad!”

But while Gabbard’s views on Assad have been a source of controversy, the concerns she raised about Harris’s record aren’t unique to her. Drug reform advocates have similarly questioned Harris, who has only recently embraced comprehensive cannabis legalization after actively opposing efforts to legalize marijuana in her state.

Sen. Cory Booker (D-NJ), another Democratic candidate, has also raised a similar point about the lighthearted manner in which Harris discussed her past marijuana use.

“We have presidential candidates and congresspeople and senators that now talk about their marijuana use almost as if it’s funny,” Booker said in March shortly after Harris talked about smoking cannabis in college in an interview. “But meanwhile, in 2017, we had more arrests for marijuana possession in this country than all the violent crime arrests combined.”

Several Republican party operatives rallied behind Gabbard’s criticism, signaling that they believe a longtime anti-marijuana record is a liability for Harris should she become her party’s nominee.

Kamala Harris put over 1,500 people in prison for marijuana-related offenses.

Harris
-Fought to kill Proposition 19 in 2010, a measure that would have legalized marijuana for recreational use, though she now supports federal legislation that would do just that.
– As CA AG, she jailed thousands on marijuana charges and was against legalizing marijuana.

@KamalaHarris can't get her facts straight:
– She fought to keep inmates locked up in overcrowded prisons so they could be used for cheap labor
– She jailed 1000's on marijuana charges, but now wants to legalize marijuana
Kamala, can you make up your mind?#DemDebates #LeadRight

And then she went on the radio and laughed about smoking pothttps://t.co/0tfxfQJtJCpic.twitter.com/G029Nitwh9

In her own post-debate interview, Gabbard said that Harris “never addressed the issues that I brought up.”

“These are examples that have been widely reported and documented,” the congresswoman said. “I think the people deserve answers. She said tonight, a few times, how proud she is of her record, yet there are too many people in California who have directly suffered, families who’ve been torn apart, people who have individually been harmed because of the decisions that she made as attorney general.”

“People like Kamala Harris need to be held accountable for their record—not for something she said or did 50 years ago, this is something that she did in her last job before she was elected as a U.S. senator,” she said.

Asked about Harris’s spin room response to the exchange and the senator’s criticism of Gabbard as it related to Assad, the congresswoman said “I think it’s unfortunate and a disservice to voters in this country that she resorts to cheap smears rather than actually addressing her record—the issues that I’ve raised and the fact that she said she’s proud of this record.”

“If that’s the case, then voters deserve to hear about why she’s so proud of the lives that she has negatively impacted, the families that she’s torn apart in California,” she said.