Recently, pages with “marijuana” and “cannabis” in their names stopped appearing in search results.

The pages are still active and can be found via direct links, but users without the URLs or bookmarks are out of luck, leading to questions about whether the social network is “shadow banning” the pages.

Facebook has yet to offer an explanation for this snafu, which is, for example, affecting the page for the California Bureau of Cannabis Control, the official government agency that regulates the state’s multi billion-dollar industry, as well as cannabis-focused media outlets like Marijuana Moment and Marijuana Business Daily and nonprofit advocacy groups like the Marijuana Policy Project.

Wow. Facebook is shadow-banning @BCCinfo_dca, the California state agency regulating cannabis, putting it on the same level as InfoWars. pic.twitter.com/rFipqeWSSa

A “shadow ban” is the term used for when a user’s web resource–a social-media page or a web-forum post–isn’t deleted or blocked, but is only visible to the individual user. 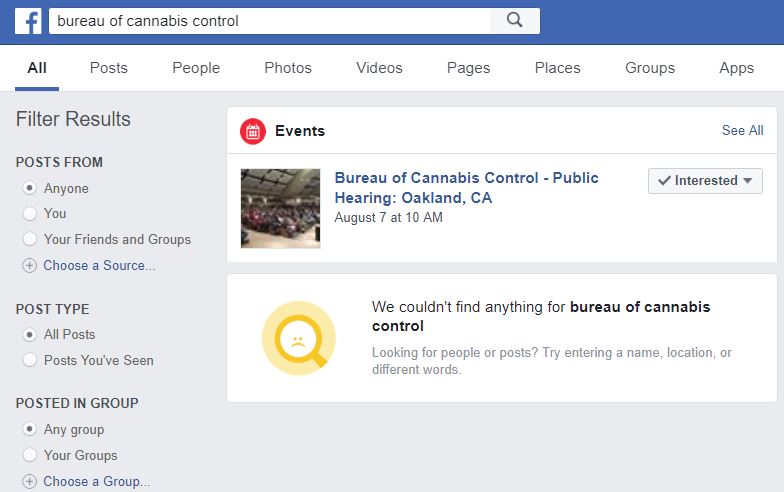 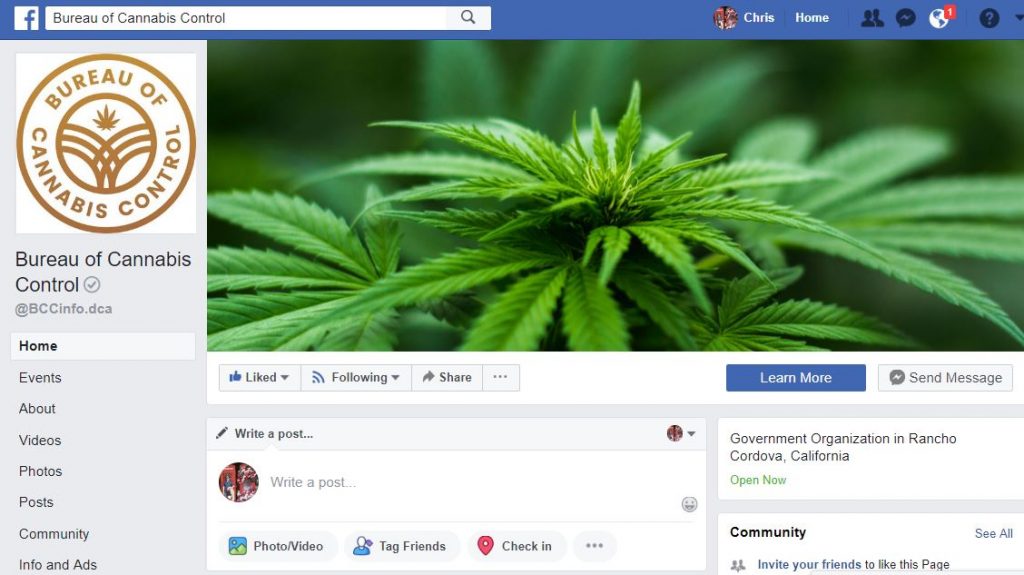 Since 2014, when legal marijuana marketplaces opened up in Washington and Colorado, all major social networks declared cannabis-related ads verboten. To this day, significant limitations remain.

Advertisements for marijuana businesses or advocating cannabis use are regularly blocked on Facebook and other social-media websites—including Instagram, which is also a Facebook property—for violating community standards, which ban the sale of “illegal drugs.”

Last year, Twitter, which has more than 330 million active monthly users, briefly blocked all searches on its site for “marijuana.”

But this may be the first time access to a government agency’s marijuana-related page has been interrupted in this way.

In this case, the disruption is significant: Marijuana industry attorneys, entrepreneurs and businesspeople rely on BCC’s Facebook page for notices of upcoming meetings and for easy access to the latest iteration of the state’s lengthy and complication rules for the marijuana industry.

BCC staff are aware of the issue and have contacted Facebook for an explanation, but have yet to receive one.

“We have reached out to Facebook with no response so far,” BCC spokesman Alex Traverso said in an email to Marijuana Moment. “This is the first time something like this has happened. In fact, we’ve even done promoted posts on Facebook before without any issue.”

Reached via email, a spokesperson for Facebook asked for more information about the situation. After it was provided, the spokesperson did not respond to further requests for comment.

“It’s clear that something’s happened,” said Sylvia Chi, an Oakland, California-based attorney with clients in the marijuana space. “But it’s not clear what.”

It's not just BCC; this "shadowban" seems to work by not surfacing any page that has "cannabis" or "marijuana" in the title through Facebook's search, EXCEPT on the Facebook app for iOS. Other affected pages include @NCIAorg @MarijuanaPolicy, @MarijuanaMoment, and @MJBizDaily.

Users accessing Facebook via the iOS app have been able to find cannabis-related pages they already follow on the main search results tab, but tapping the “Pages” tab yields an empty result.

Chi theorized that the snafu is a “bug” or glitch rather than a conscious choice to de-list or shadow ban marijuana pages.

Facebook has in the past been criticized for inconsistent, incoherent and unrealistic community guidelines. Until 2016, users were able to conduct firearms transactions. And critics have faulted the social network for its inability to police hate speech, including posts and pages from white-supremacist organizations.

“I think their community standards around marijuana are problematic,” said Chi, who noted Facebook had earlier this year updated its guidelines to prohibit minors from seeing advertisements of gun accessories. “It seems like they could do the same thing for marijuana, but just don’t want to.”