Illinois regulators released a report on Monday that shows a glaring lack of diversity among business owners in the state’s adult-use marijuana market. But it also outlines a plan to begin turning that around in the next fiscal year, with the industry set to significantly expand as nearly 200 new social equity businesses come online.

The Illinois Department of Financial and Professional Regulation’s (IDFPR) 2022 Annual Cannabis Report underscores a key reason the state has faced criticism from advocates over the rollout of the recreational marijuana market: Negligible racial and gender representation among business owners and corporate executives.

There are currently no active cannabis licenses with majority ownership by social equity applicants, people of color or people with disabilities. And there’s only one licensee with majority women ownership.

White people are disproportionately represented in every market category, including majority owners (88 percent), minority owners (71 percent), boards of directors (90 percent) and C-suite executives (80 percent). Black and Latino people account for less than 10 percent for most of the top positions. 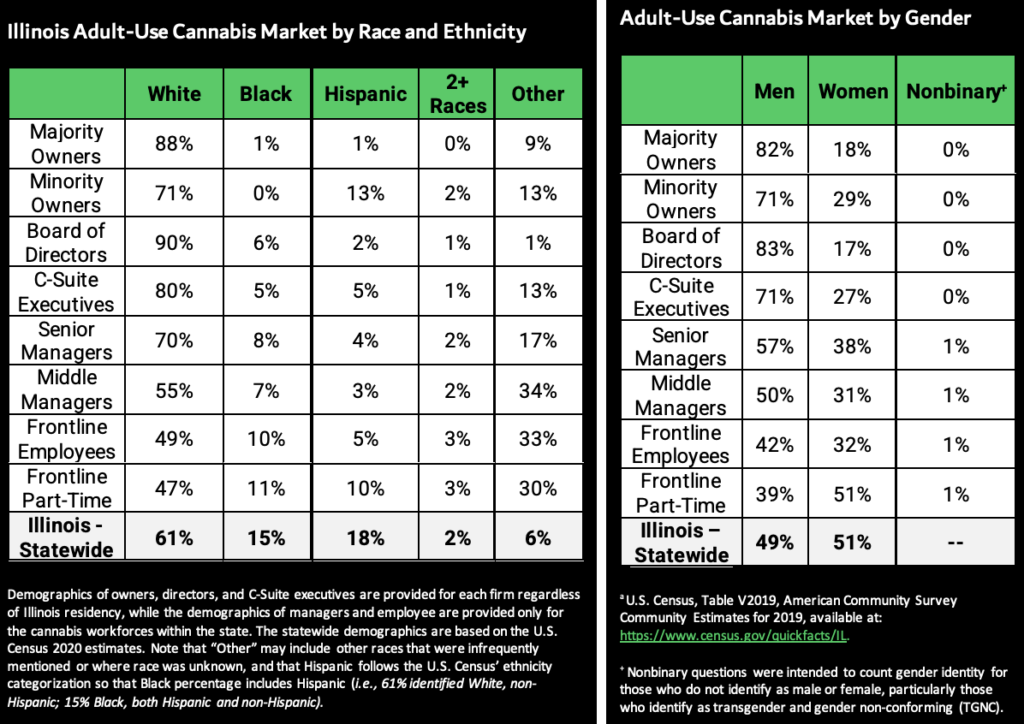 The diversity deficit has been met with sharp criticism from activists who feel that the state has failed to fulfill the promises of equitable legalization. A day after the IDFPR report was released, a coalition of advocates held a press conference to call attention to the ongoing problem and demand action to resolve the problem.

“I look forward to working with my colleagues in the Legislature, and the Governor’s Office, to pursue solutions for our cannabis program,” Ford said in a press release.

While the 2022 Fiscal Year ended without meeting calls for inclusivity in the industry, the report also detailed next steps for marijuana business licensing in the new year that regulators say will help level the playing field.

IDFPR said that it has approved 190 new conditional adult-use retailer licenses, including 185 that will be issued to social equity applicants starting in July 2023. Existing conditional license holder will also be converted to a fully approved dispensary, which “represents an increase of over 100 percent of new licenses.”

“This represents an unprecedented expansion of the cannabis market and includes only Social Equity Applicants, providing further diversity to the market,” the report says. “This expansion has already created new opportunities and innovations to Department processes.”

The department intended to process the social equity licenses earlier following a 2021 lottery, but a court had stayed the action for nearly a year before that was lifted in May.

Regulators also said that they will also be carrying out the “first disparity study of the cannabis industry” in the 2023 Fiscal Year.

The new report gives other details about the cannabis market, including sales data.

For this most recent fiscal year, Illinois saw $1,504,067,158 in recreational marijuana sales. For the 2022 calendar year, the state crossed the $1 billion mark in August—two months earlier than it took to reach that milestone in 2021.

Pritzker recently touted the state’s marijuana sales and resulting tax revenue for the 2022 Fiscal Year. Illinois collected $445.3 million in tax dollars from $1.5 billion in cannabis sales during that period. That’s a 50 percent increase is cannabis tax dollars compared to the prior fiscal year.

While 2022 recreational marijuana sales have been generally stable this year, there’s an expectation that purchases will increase demonstrably since officials approved the nearly 200 new social equity marijuana retailer licenses.

The governor and other state officials have emphasized that they’re committed to ensuring that portions of tax revenue from the marijuana market go toward community reinvestment, as prescribed under the state’s legalization law.

In June, Illinois officials announced that the state is awarding $45 million in grants funded by marijuana tax dollars to support community reinvestment in areas “hardest hit by the failed war on drugs.”

That marks the second round of funding that’s being made available through the state’s Restore, Reinvest, and Renew (R3) program, which was established under Illinois’s adult-use cannabis legalization law.

In addition to providing community reinvestment funding, the governor announced in 2020 that his office had processed more than 500,000 expungements and pardons for people with low-level cannabis convictions on their records.

Pritzker also recently signed a bill that will make it so courts cannot deny petitions to expunge or seal records based on a positive drug test for marijuana.

A state-funded initiative was also recently established to help residents with marijuana convictions get legal aid and other services to have their records expunged.