A new year can bring new resolutions—and for some, that involves either quitting or cutting back on marijuana.

That’s why each New Year’s Day for the past seven years, an online community meant to support people who want to transition away from cannabis puts out an open invitation on the popular pro-marijuana subreddit r/trees.

And, believe it or not, the members of r/trees welcome the pitch with open arms, voting the posts to the top of their cannabis enthusiast forum.

“We’re not anti-pot at all, we just support people who have decided that it’s not for them anymore,” this year’s post from the moderators of r/leaves reads. “If that’s you then you’re welcome to come by.” 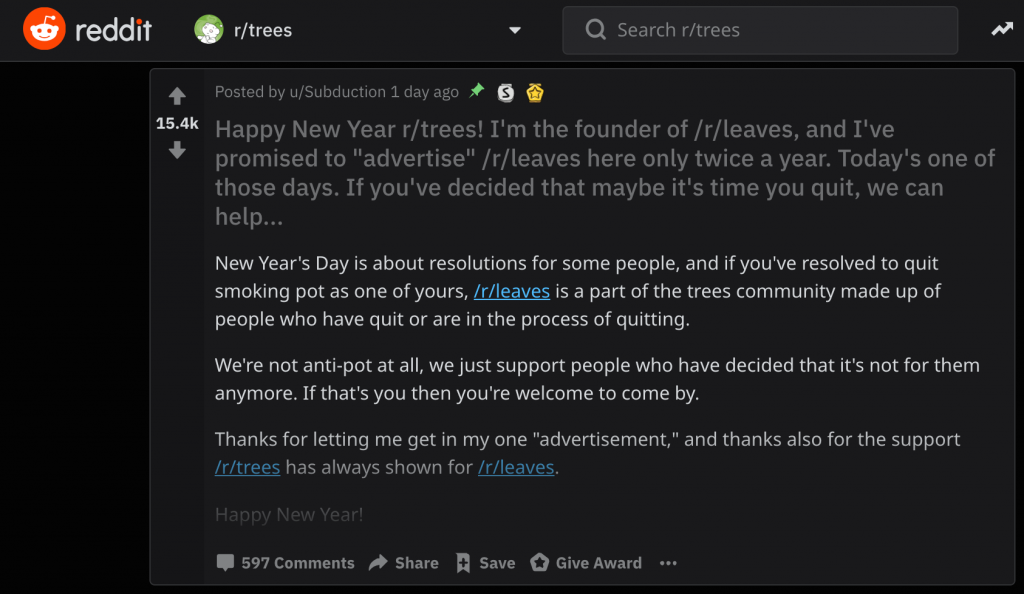 People who join are empowered to take what they need from the group but not necessarily adhere to any structured abstention routine. Users share stories about their own experiences, offer tips on what helped them curb cannabis and cheer each other on. One of the only rules of r/leaves is that comments and posts must be supportive and respectful.

“We have a pretty narrow scope,” r/leaves founder Dave, who asked that only his first name be used, told Marijuana Moment in a phone interview. “We don’t make any claims or have any mission towards providing a cure or a system to have them emerge out the other side not as an addict. You don’t even have to define yourself as an addict or any of that kind of stuff—you just have to decide it’s time to quit.”

Sometimes that decision making time comes around the unofficial marijuana holiday on 4/20, the other time of year that r/leaves promotes its community on the 1.3 million-member r/trees forum.

While cannabis isn’t physically addictive in the way that other drugs like cocaine or heroin are, a subset of consumers can become dependent on it. The problem is that some who find themselves in that boat face stigma—and not just from the usual anti-drug suspects but also from marijuana enthusiasts who don’t accept that cannabis use can become problematic.

But that’s starting to change, Dave said. As more information about cannabis becomes available and more people start talking about their difficulties managing usage, the marijuana community has increasingly embraced the kind of work r/leaves does. The forum features several posts from r/trees users who simply wanted to express their support for the mission, even if they’re not interested in quitting.

“I think there’s a growing recognition that you don’t have to say there are no dependency problems with cannabis. We can say, ‘yeah, you know what some people get dependent, but that’s OK.’ We can deal with this as a community and do it the right way.”

The best advice Dave said he’s heard on the forum sounds simple at first, but for someone with a dependency problem, it can be the toughest part to accomplish: ask yourself—and be fully honest with yourself—whether you are problematically dependent.

“That I think is the key—to really look at negative consequences, really evaluate whether they are worth cutting back or quitting,” he said. “And if you say, ‘yes,’ then try to cut back and if you can’t, then that’s why we’re there is to help you quit.”

The r/leaves community was formed partly as a response to the rapid evolution of the marijuana legalization movement over the last decade. But Dave said he’s not at all opposed to cannabis reform even if it was part of the inspiration. In fact, he said he’s “unequivocally in favor of recreational legalization at the federal level.”

“Anyone who wants to use the group as any sort of evidence that cannabis shouldn’t be legalized will find no friend in me,” he said. “We are just the opposite. We are showing that we can recognize that some people who try cannabis can become dependent, that we can talk about that openly, and we can take care of those people and make them better even as legalization progresses.”

Study: Festival Attendees Use Different Drugs Based On Music Genre, But They All Love Marijuana