Now, thanks to the fact that Sessions inadvertently showed an agenda for the meeting to a TV camera that was in the room to capture introductions — along with some high-tech sleuthing — we know what the prohibitionists discussed in secret after reporters were kicked out.

A Twitter user with the handle @MentalMocean was able to enhance a screen capture of the document that Marijuana Moment posted. 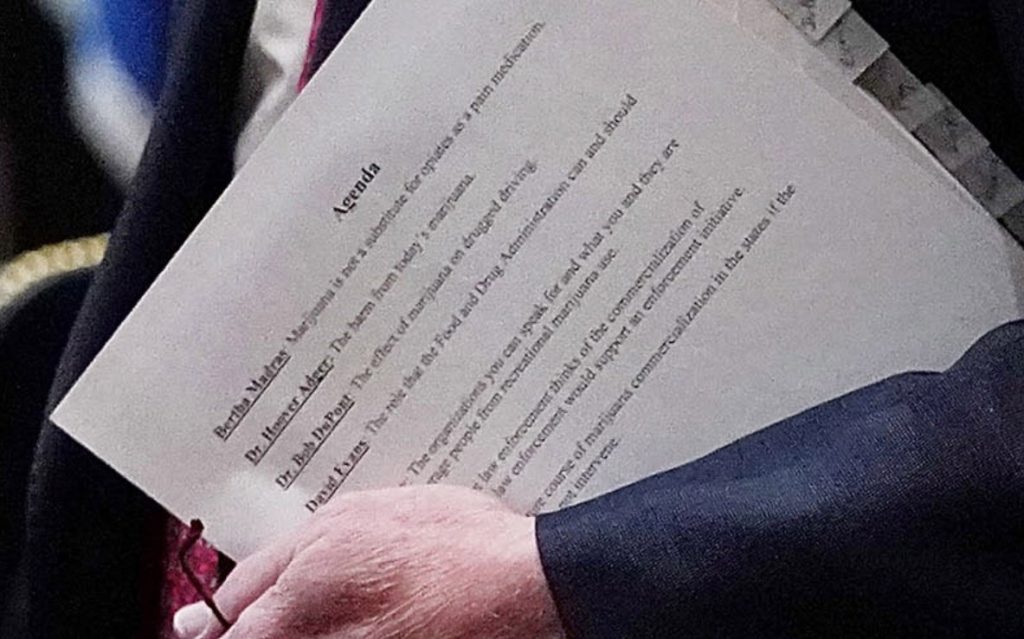 The document appears to read:

Bertha Madras: Marijuana is not a substitute for opiates as a pain medication.

Dr. Bob DuPont: The effect of marijuana on drugged driving.

David Evans: The role that the Food and Drug Administration can and should [obscured]

[obscured] The organizations you can speak for and what you and they are [obscured] people from recreational marijuana use.

[obscured] course of marijuana commercialization in the states if the [obscured] not intervene.

The enhanced photo makes clear that the anti-legalization activists made a concerted pitch during meeting to convince Sessions to launch a federal crackdown on states that have ended cannabis prohibition.

Can any tech wizards enhance this screen grab of an agenda that Jeff Sessions was holding before the start of a drug policy meeting today? pic.twitter.com/7FLvjj1AZd

In attendance, according to video of the opening introductions captured by a pool photographer and posted by C-SPAN, were:

“I think it’s a big issue for America, for the country, and I’m of the general view that this is not a healthy substance,” Sessions said at the beginning of the gathering. “I think that’s pretty clear. And then have the policy response that we and the federal government needs to be prepared to take and do so appropriately and with good sense.”

“I appreciate the opportunity to hear your analysis on marijuana and some of the related issues,” Sessions told the group. “I do believe, and I’m afraid, that the public is not properly educated on some of the issues related to marijuana. And that would be a matter that we could, all of us together, maybe be helpful in working on and that would allow better policy to actually be enacted.”

The group’s roundtable discussion itself, which took place after initial introductions, was closed to the press.

The gathering comes as the Justice Department’s overall position on marijuana policy remains uncertain. Sessions has in recent weeks sent mixed signals about his plans for federal marijuana enforcement under the Trump administration.

Last month, he testified before Congress that an Obama-era Justice Department memo that generally allows states to implement their own marijuana laws without interference remains in effect. But he separately told reporters at a briefing that his department is actively conducting talks about potential changes to the policy.