Federal prosecutions for marijuana trafficking declined again in 2019, and drug possession cases overall saw an even more dramatic decline, according to a new report published by the U.S. Sentencing Commission on Monday.

While drug cases still represent the second most common category of crimes in the federal criminal justice system, the data indicates that the bulk of those instances are related to methamphetamine trafficking, which has steadily increased over the past decade.

But for marijuana, a different kind of trend has emerged. As more states have moved to legalize cannabis, federal prosecutions have consistently declined since 2012. To illustrate the shift, marijuana trafficking cases represented the most common drug type that was pursued in 2012, with about 7,000 cases. As of fiscal year 2019, those cases are now the second least common, with fewer than 2,000 cases. 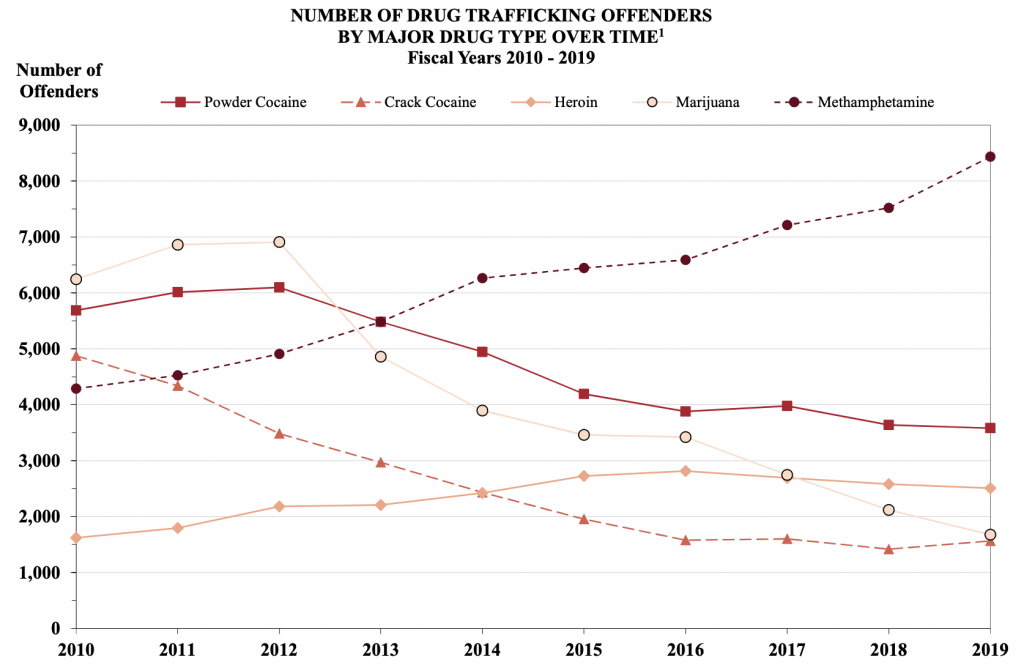 Notably, the year of that peak, 2012, was when Colorado and Washington State became the first to legalize for recreational purposes. Though the report doesn’t attempt to explain why cannabis cases are on the decline, advocates have postulated that state-level marijuana reform has helped curb illicit trafficking by creating a regulated market for consumers to obtain the products.

“Twenty-five percent of the public now live in jurisdictions where the sale of marijuana to adults is legal,” Justin Strekal, political director of NORML, told Marijuana Moment. “Of course there will be a corresponding drop in the number of illegal sales.”

Another possibility is that evolving public opinion and state policies have contributed to a shift in perspective among prosecutors, who may no longer wish to prioritize enforcing cannabis prohibition in the era of legalization. While all marijuana sales—even in states with legalization laws—remain federally prohibited, the Trump administration has in practice continued the Obama-era approach of generally not interfering with the implementation of local policies even though then-U.S. Attorney General Jeff Sessions formally rescinded a memo on the topic from the prior administration.

In any case, the new U.S. Sentencing Commission report also shows a broader decline in drug possession cases in general. In fact, the most significant reduction in crime category for 2019 was drug possession, which fell from 777 federal cases the previous year down to 563—a 28 percent drop.

It was just 2017 when drug offenses account for the majority of federal prosecutions. Two years later, that position is now occupied by immigration cases. Put another way, the report shows that 38.4 percent of crimes were related to immigration, compared to 26.6 percent for drug offenses. 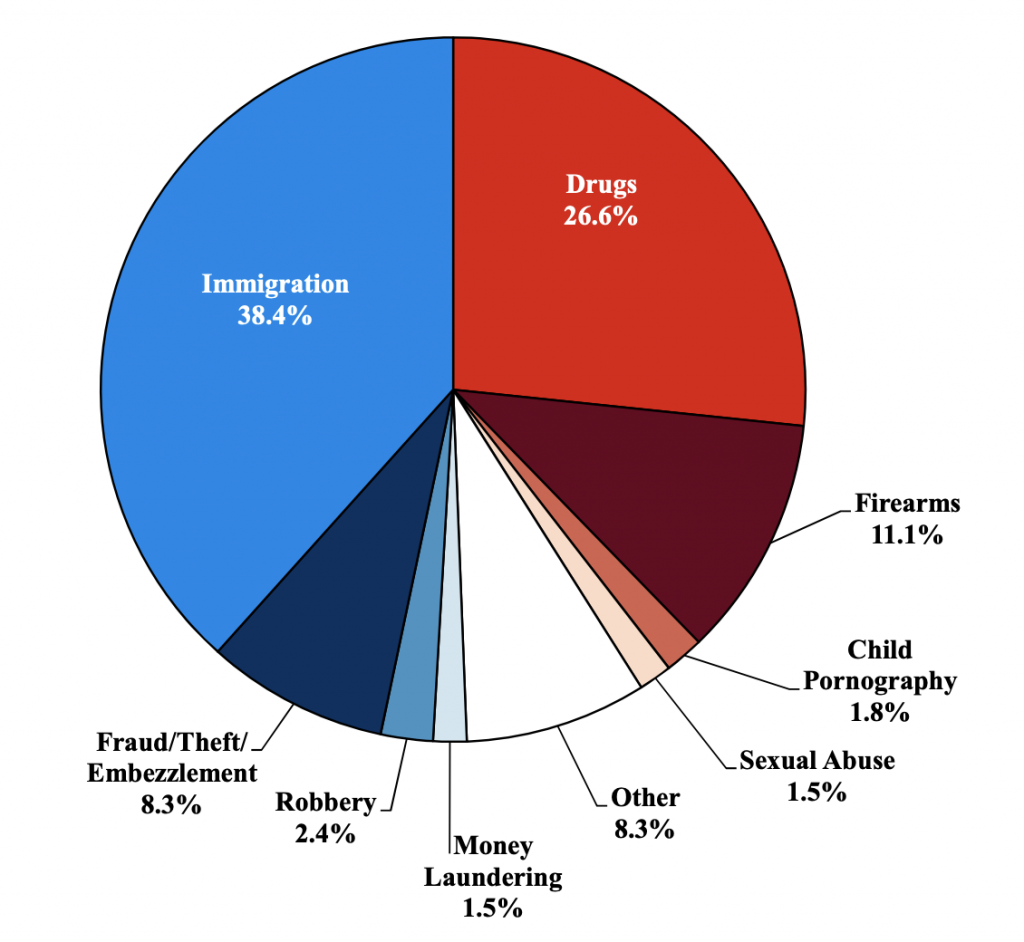 While marijuana trafficking cases decreased, the average sentence for a conviction increased by two months, from 29 to 31. 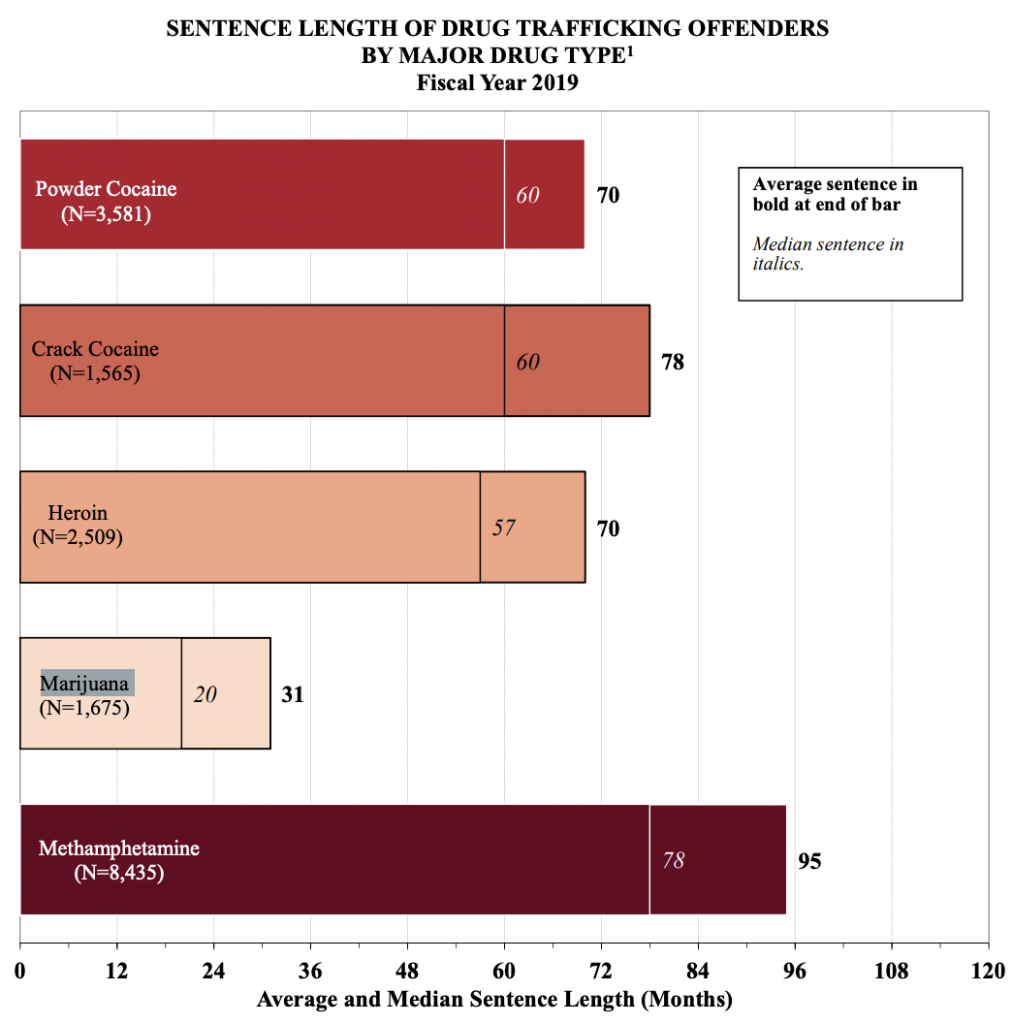 Overall, drug trafficking prosecutions did increase by about 1,000 cases in 2019, though again that’s largely attributable to an increase in methamphetamine-related prosecutions.