Having a Facebook page deleted has become an all-too-common occurrence for marijuana companies and organizations that operate adjacent to the cannabis industry.

But, according to a report Monday in The Telegraph, the social media giant is currently weighing whether to change its rules on “regulated goods” to allow users to promote marijuana products for sale.

“Our policies at the moment do not allow for the sale of marijuana on the platform,” company officials said during what the UK newspaper described as an internal presentation it attended. “We want to consider whether we can loosen this restriction, especially in relation to medical marijuana, legal marijuana and brick and mortar stores.”

Among the considerations for the company are how it could determine whether a marijuana seller advertising services on the platform is legal, how it could block cannabis-related content for users who are under 21 and how various societies around the world would react to marijuana advertisements on the social-media platform.

“Since marijuana faces different legal and social restrictions across the globe, this may be operationally challenging for us,” The Telegraph quoted an employee as saying. The company “may encounter regional pushback in those areas of the world where the law or [society] views marijuana negatively,” the employee said.

The newspaper described Facebook’s process as an “internal working group” that’s tasked with proposing new rules and determining whether they could be realistically enforced. 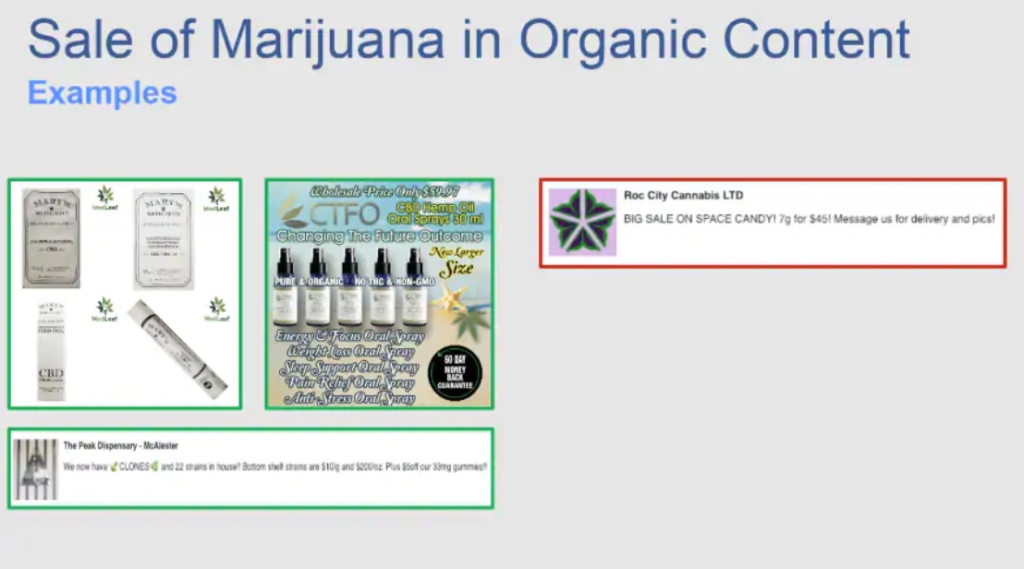 If the policy is approved, it would complete a remarkable turnaround on cannabis for the Silicon Valley powerhouse, which for years had punished marijuana-related accounts with bans or blocked searches.

Facebook lifted a “moratorium” on cannabis and cannabis-related search results on October 17, to coincide with the first day of legal sales in Canada, where many sales are conducted online.

Previously, Facebook did not block entities like legalization groups and dispensaries from having Facebook pages, but did apply a “shadow ban” to cannabis pages so far-reaching that it also appeared to capture the Facebook pages of government regulatory agencies like California’s Bureau of Cannabis Control as well as news organizations such as Marijuana Moment.

The site’s algorithms have also made it notoriously difficult to promote paid posts about marijuana, even if they were related to policy or news and not focused on cannabis commerce.

However, cannabis is now legal for sale in pharmacies in Uruguay and in government-regulated retail stores and via online sales in Canada. Recreational cannabis sales are also regulated and taxed in a growing number of U.S. states.

According to the Telegraph, Facebook currently employs artificial intelligence to flag accounts for mentioning or picturing illegal drugs, including cannabis.

Under the changes under consideration, Facebook would continue to ban marijuana sales via its Marketplace section and would still bar paid ads for such such sales. But it would allow cannabis companies to list their prices on the site for the first time.