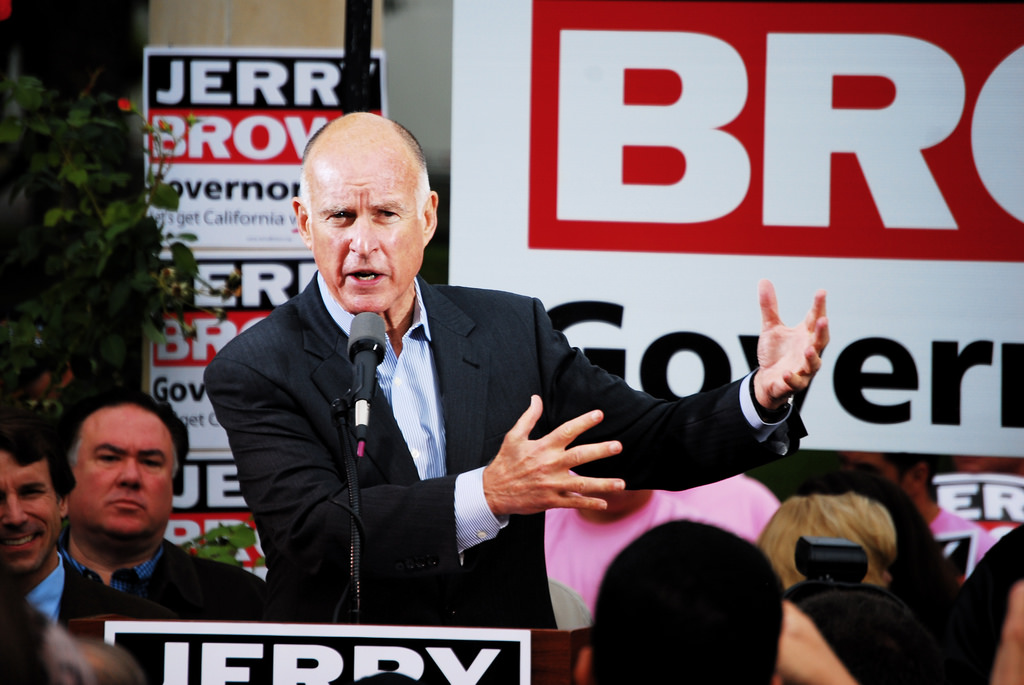 During his two stints as California governor—between 1975 and 1983, and 2011 and next January, when he is termed out and may finally retire from almost 50 years of public life—Jerry Brown has become known for several character traits.

He is frugal, to the point of parsimony. He is attentive to issues that are way out there. He is concerned about climate change. And he cannot stop making negative, non-germane non sequiturs about marijuana, his state’s biggest cash crop.

In 2014, he suggested that neither California nor the United States could be a great economic power if marijuana was legalized, thanks to the shiftiness of “the potheads.”

“The world’s pretty dangerous, very competitive,” he said during an appearance on NBC’s Meet The Press. “I think we need to stay alert, if not 24 hours a day, more than some of the potheads might be able to put together.”

Giving his reasoning why he opposed marijuana legalization, he mused, “how many people can get stoned and still have a great state or a great nation?”

Now, in a New York Times profile published on Tuesday, while speaking on the subject of climate change, Brown reached deep into his pocket for a very off-topic cannabis-themed barb.

“We either do nothing and smoke marijuana because it’s legalized, or we put our shoulder to the plow and do everything we can,” he told the paper on a recent afternoon (one of 23 interviews he gave that same day, according to the Times). “I don’t know if I’m an optimist. I’m a realist.”

Links between recreational marijuana use and some vague “dumbing-down” of the populace are unfounded, and are reminiscent of the spurious, race-baiting tactics employed by former drug czar Harry Anslinger.

The source of Brown’s opprobrium towards marijuana is not immediately clear.

Before his election in 2010, Brown offered laconic yet incoherent reasoning for his adamant anti-legalization stance.

“You know, the number one drug on the street is marijuana. The cartels are increasingly taking over. This is a serious problem,” he told an interviewer with GQ.

(At the time, California had a thriving medical cannabis industry. Legalized marijuana was later found to compel drug-traffickers to exit trade in the drug and seek other forms of income.)

“I think it’s more prudent for California not to embrace a legalization strategy,” he added. “I don’t think fostering chemicals is a smart move.”

He declined to engage with the interviewer when asked if he’d support a policy of prohibiting alcohol.

Brown’s stance puts the 80-year-old at odds with most of his fellow California Democrats—chief among whom must be Lt. Gov. Gavin Newsom.

After opposing marijuana legalization in 2010, Newsom quickly hopped on board the cannabis bandwagon following Colorado and Washington’s votes to end cannabis prohibition in 2012, and was the most prominent political backer of 2016’s Prop. 64, which legalized recreational marijuana in California.

Newsom briefly mounted a bid for California governor a decade ago before he was boxed out by the better-funded and better-prepared elder statesman.

In recent years, Brown did eventually sign into law a package of bills that set up a regulated and taxed commercial cannabis industry in the state. But his outdated Reefer Madness views about people who consume marijuana seem to persist, if this week’s Times interview is any indication.