A leading anti-legalization group is cooking up a new follow-the-money tool, ostensibly to track contributions from the marijuana industry to lawmakers.

At least, that seems to be what Smart Approaches to Marijuana (SAM) is doing with this interactive map on its website: 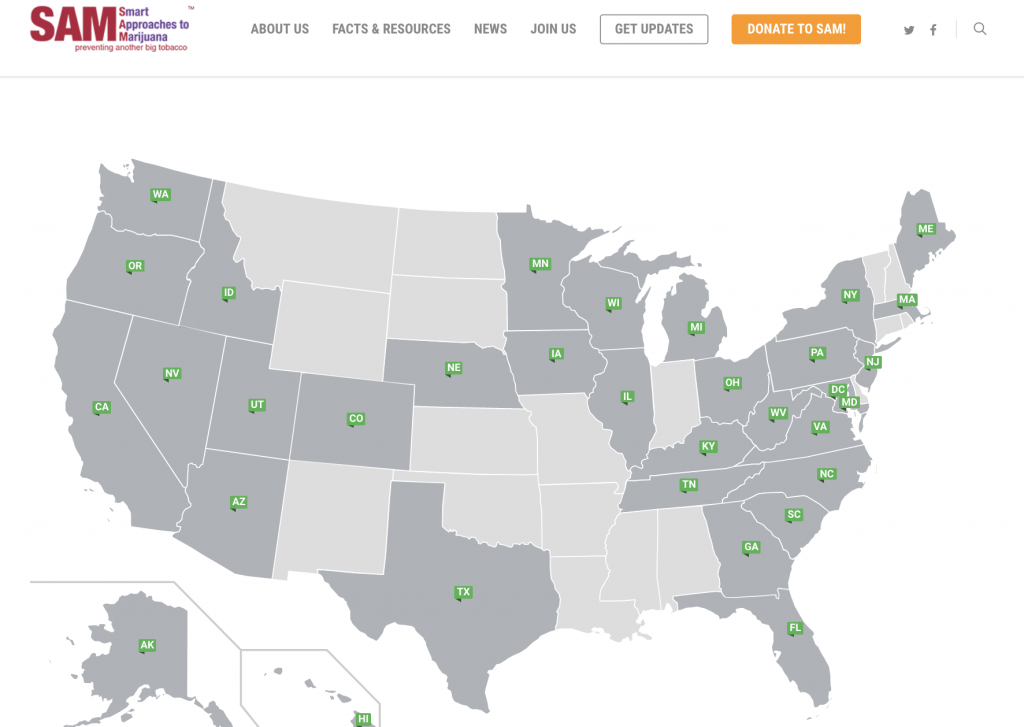 If you visit the page and click on a highlighted state, it brings you to a list naming select members of Congress, the district they represent and an undefined monetary “amount.”

Presumably, this is a beta version of something that SAM has been talking about for some time.

Take last year, for example. A group of 44 U.S. House members signed a letter to the chairman of a key subcommittee, asking that language restricting the Department of Justice from interfering in state marijuana programs be included in an appropriations bill. In response, SAM president Kevin Sabet announced plans to “investigate campaign contributions” of signees.

“Legalization is about making a small number of people very rich,” Sabet said in a press release. “For them, it’s all about the money.”

“The representatives who sign on to this letter will be investigated, and any ties to the pot industry lobby will be exposed. There’s a money trail behind further relaxation of federal marijuana laws, and it points to politicians who have taken money from the next big addictive industry.”

It’s admittedly difficult to follow the money using the current version of SAM’s online map, though. There are few citations showing where the group’s information is coming from, and for most states, when you click on one of the hyperlinked “amounts,” it takes you here:

For some reason, nearly every hyperlinked amount points to a URL apparently meant for Rep. Dana Rohrabacher (R-CA), and the page only shows a 404 error message.

At least one state, Washington, seems to be mostly functional. 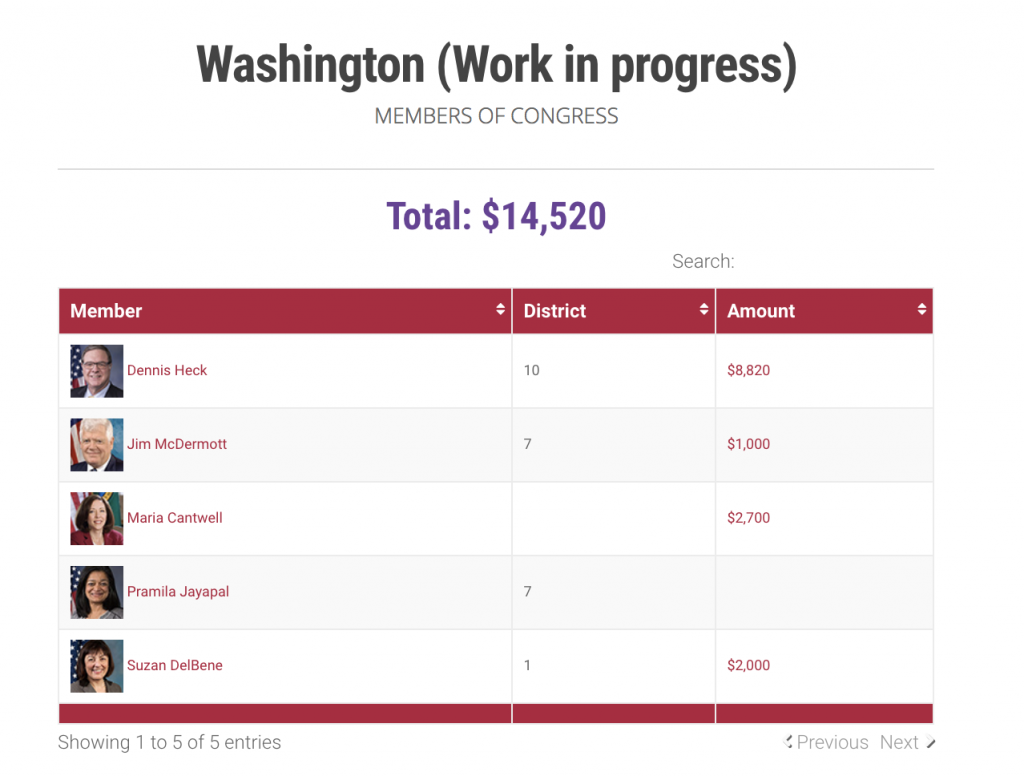 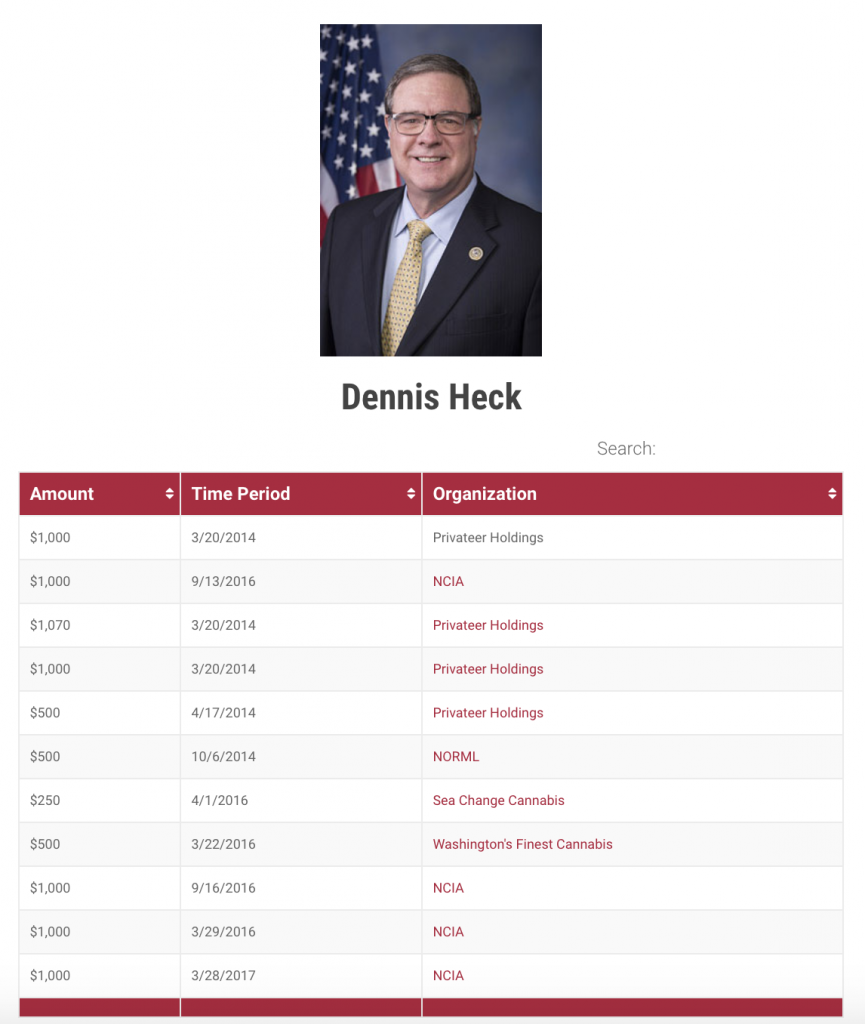 SAM representatives did not respond to a request for comment by the time of publication, but they do appear to have slightly edited the webpage after receiving Marijuana Moment’s inquiry. The title “The Money Trail: Where Big Pot Meets Big Politics” was added above the map, and the phrase “(Work In Progress)” was appended to all sub-pages.

This story will be updated if the organization sends comment.

What SAM appears to be interested in accomplishing is drawing links between campaign contributions from cannabis industry interests and politicians who’ve come to embrace marijuana reform. Or in other words, campaign finance transparency.

Missing from that agenda, though, is disclosure of SAM’s own finances—a subject of particular interest to advocates and reporters following the marijuana legalization debate.

Sabet touted the group’s financial expansion over the past two years in a recent curriculum vitae (not linked here, as it appears to reveal his personal phone number). A summary of Sabet’s work at SAM noted that the 12-person organization has a $1 million budget, with $4.5 million in reserve.

The group also recently opened a new office in Manhattan.

When this reporter asked Sabet about financial contributions to SAM in a 2016 interview, he emphasized the role of grassroots, individual contributions. There is limited public information available about SAM’s financing.

“SAM is funded by small family foundations (with no interest in the opioid, tobacco, alcohol, or prison industries) and individuals affected by drug use and its consequences. SAM does not receive a dollar from the opioid, pharmaceutical, alcohol, or tobacco industries – unlike some pro-legalization groups like Law Enforcement Action Partnership (LEAP), which takes money from Big Tobacco.”

Another potential source of ongoing funding may be past supporter Julie Schauer, a retired art professor who donated at least $1.3 million to SAM Action’s efforts to defeat 2016 marijuana ballot initiatives in California and other states.

It remains to be seen when SAM will officially launch its online campaign donation tracking tool and what its impact will be.