Most Americans are in agreement that cigarettes and other tobacco products are seriously unhealthy. Far fewer think marijuana is bad for you, according to a new Gallup poll.

The survey represents the first time Gallup has measured Americans’ views on a wide range of tobacco products as well as cannabis. A significant number of respondents (96 percent) said cigarettes are either “very harmful” or “somewhat harmful,” while 56 percent of respondents said the same about marijuana. 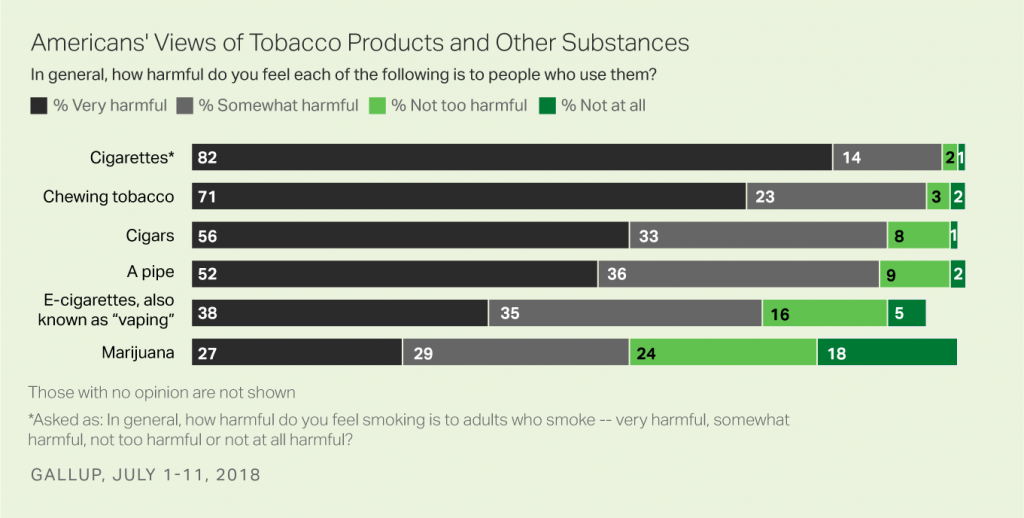 After cigarettes, most respondents agreed that chewing tobacco, cigars and pipes are harmful. Marijuana was ranked as the least harmful, with 24 percent of Americans saying cannabis is “not very harmful” and 18 percent saying it was “not at all” harmful.

The survey revealed one apparent contradiction. While the belief that cigarettes are harmful was nearly universal in the survey, the product is also the most commonly used one on the list. Twenty percent of respondents said they smoked cigarettes “regularly” or “occasionally.” Marijuana was the second most commonly used product: a total of 13 percent said they smoked cannabis.

Based on the fact that government regulations on tobacco products are tightening and public health campaigns have effectively convinced Americans of the dangers of tobacco, Gallup predicted that the number of cigarette smokers would continue to decline.

At the same time, as more states legalize cannabis and more people use it for medical or recreational purposes, Gallup said “marijuana users could outnumber cigarette smokers in the U.S.”

Similarly, the survey showed that Americans viewed vaping devices for tobacco as significantly less harmful than cigarettes, which “may lead to increased usage of vaping.”

The poll did not ask about Americans’ specific views on cannabis vaping as opposed to smoking it, however.

While research on the relative harms of e-cigarettes compared to regular cigarettes is ongoing, there’s a growing body of evidence supporting the notion that marijuana is less harmful than cigarettes.

In 2012, for example, a large-scale study published in the Journal of the American Medical Association found that tobacco use was associated with decreased air flow rate among users, while air flow rates actually increased when people were exposed to cannabis.

Why Marijuana Consumers Have Smaller Waistlines Than Non-Users