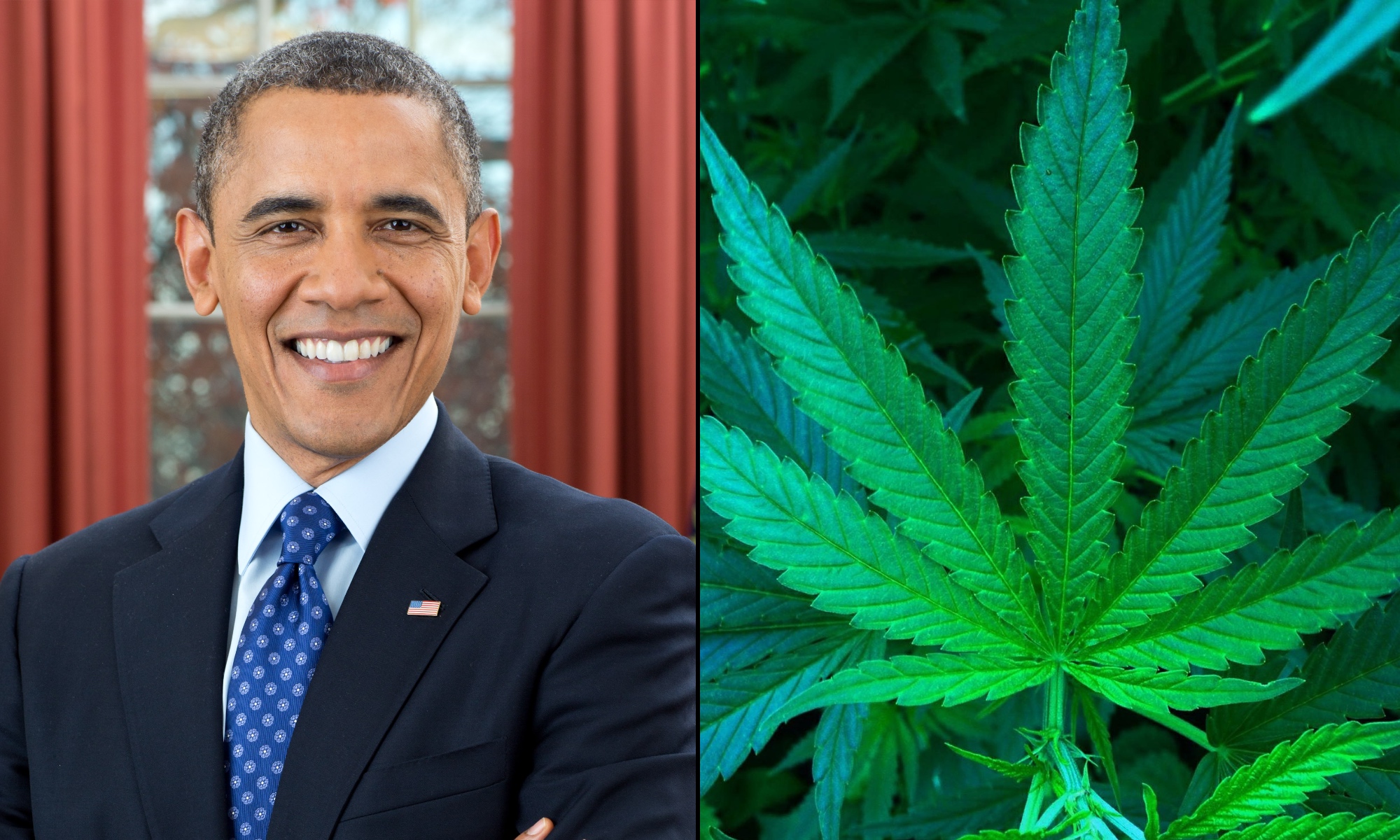 In a new memoir looking back at his time in office, former President Barack Obama writes that a decision early in his first term to cut deals with congressional Republicans allowed him to ignore some Democrats’ calls for “less orthodox ideas” such as marijuana legalization.

“Truthfully,” Obama writes in the new book, “just the act of negotiating with Republicans served as a handy excuse to deflect some of the less orthodox ideas that occasionally surfaced from our side of the aisle (‘I’m sorry, Congressman, but legalizing marijuana isn’t the kind of stimulus we’re talking about here…’).”

While the anecdote at hand is specifically about the economic stimulus package that the Obama negotiated early in his first term, his characterization of how he reacted to the push for cannabis reform is largely indicative of how he handled the issue during his presidency: By deflecting blame to Congress.

Despite being the first president to openly acknowledge having smoked—and enjoyed—marijuana before entering office, Obama mentions cannabis only a few times in the 700-plus-page “A Promised Land,” published on Tuesday. Its other discussions of drug policy, according to a review by Marijuana Moment, include references to Obama’s own past cannabis use—particularly how it sparked controversy in his campaign for president against then-Sen. Hillary Clinton (D-NY)—and sermons by his former pastor, the Rev. Jeremiah Wright.

Obama writes that during his first run for president, Clinton’s campaign co-chair, Billy Shaheen—who is married to Sen. Jeanne Shaheen (D-NH)—had “raised to a reporter that my self-disclosed prior drug use would prove fatal in a matchup against the Republican nominee.” (Obama had famously said in a 2006 interview: “I inhaled. Frequently. That was the point.”)

“I didn’t consider the general question of my youthful indiscretions out of bounds,” Obama writes, “but Shaheen went a bit further, implying that perhaps I had dealt drugs as well. The interview set off a furor, and Shaheen quickly resigned from his post.”

Clinton later apologized to Obama during a tense conversation on an airport tarmac, the former president writes.

The new book also recalls his former pastor, the Rev. Jeremiah Wright, who he says sometimes included critiques of the drug war in his sermons:

“There were times when I found Reverend Wright’s sermons a little over the top. In the middle of a scholarly explication of the Book of Matthew or Luke, he might insert a scathing critique of America’s drug war, American militarism, capitalist greed, or the intractability of American racism, rants that were usually grounded in fact but bereft of context. Often, they sounded dated, as if he were channeling a college teach-in from 1968 rather than leading a prosperous congregation that included police commanders, celebrities, wealthy businesspeople, and the Chicago school superintendent.”

Another of Obama’s references to drugs is apparently intended as a joke. Discussing the country’s recovery after the 2008 financial crisis, he writes that had he predicted such a swift stabilization when he came into office, pundits would’ve thought he was high.

“If I had predicted on the day of my swearing in that within a year the U.S. financial system would have stabilized, almost all TARP funds would be fully repaid (having actually made rather than cost taxpayers money), and the economy would have begun what would become the longest stretch of continuous growth and job creation in U.S. history,” Obama writes, “the majority of pundits and experts would have questioned my mental fitness—or assumed I was smoking something stronger than tobacco.”

A Promised Land, which concludes with the 2011 killing of Osama Bin Laden, is expected to be the first of two volumes of memoirs from the president.

While in office, Obama’s cannabis policies largely frustrated drug reformers. While significant state-level reforms happened under his watch, which he ultimately pulled back the federal government from interfering with, many advocates felt he missed an opportunity by failing to enact reform nationally, for example by reclassifying cannabis under the federal Controlled Substances Act, further easing federal prosecution of drug laws or issuing mass acts of clemency to more people with prior convictions than he ultimately did.

Though candidate Obama had said medical marijuana legalization was a question best left to the states, his administration in 2011 launched a coordinated crackdown on dispensaries in legal jurisdictions such as California. By the end of his first term, he had overseen more raids on state-legal cannabis businesses than his predecessor, President George W. Bush, did in two terms.

But the administration’s stance shifted after Colorado and Washington State voters legalized marijuana for adults in 2012, and the Obama Justice Department chose not to challenge the laws. In 2013, the administration issued the so-called Cole memo, which formally advised federal prosecutors to generally not enforce federal laws against marijuana in states with legal, well regulated markets. (The memo was scrapped by the Trump administration in 2018.)

When it came to calls to formally change marijuana’s status under the Controlled Substances Act (CSA), Obama deflected responsibility for the issue to lawmakers.

“What is and isn’t a Schedule I narcotic is a job for Congress,” he told CNN in 2014. “It’s not something by ourselves that we start changing. No, there are laws under – undergirding those determinations.”

In fact, while Congress can change cannabis’s status under federal law, the CSA also gives the administration the power to do so without an act of lawmakers.

During his time in office, advocates repeatedly called for Obama to take action on cannabis legalization, but the president was cagey on the issue. “As has been well documented, I smoked pot as a kid, and I view it as a bad habit and a vice,” he told the New Yorker in 2014, “not very different from the cigarettes that I smoked as a young person up through a big chunk of my adult life.”

“I don’t think it is more dangerous than alcohol,” he said of marijuana in the same interview, frustrating legalization supporters who saw him doing nothing to end its criminalization.

While he said legalization in Washington and Colorado is “important for it to go forward” as a way to address racial disparities in cannabis arrests and convictions, he predicted that the new policies in those states would “be, I think, a challenge” and worried about a slippery slope that could lead to legalization of cocaine or methamphetamines.

“Look, I’ve been very clear about my belief that we should try to discourage substance abuse.”

According to a 2018 book by a former Obama advisor, the president considered pushing to decriminalize marijuana late in his term—but then Trump won and he abandoned the idea.

In November 2016, after the election of Donald Trump as his successor, Obama told Rolling Stone that it wasn’t his place to change the nation’s marijuana policy through an executive action.

“Look, I’ve been very clear about my belief that we should try to discourage substance abuse. And I am not somebody who believes that legalization is a panacea,” he said. “But I do believe that treating this as a public-health issue, the same way we do with cigarettes or alcohol, is the much smarter way to do it. Typically, how these classifications are changed are not done by presidential edict but are done either legislatively or through the DEA.”

While he described himself as “very much in lame-duck status,” in the 2016 interview, Obama said legalization “is a debate that is now ripe.”

“There’s something to this whole states-being-laboratories-of-democracy and an evolutionary approach,” said the former constitutional law professor.

Also in the White House with Obama during the eight years of his administration was then-Vice President Joe Biden, the projected winner of November’s presidential election. As Biden—who championed punitive drug policies during his decades as a senator—begins the transition to the presidency, some legalization advocates are already worried his policies could echo Obama’s mealymouthed approach. During the 2020 campaign, Biden was the only major Democratic candidate who opposed legalization.

After emphasizing on the campaign trail that he would enact modest reforms such as decriminalizing the possession of cannabis and expunging prior convictions, Biden this month unveiled a racial justice plan that failed to mention marijuana reform. A spokesperson told Marijuana Moment the omission didn’t signal a deprioritization of the issue, however.

This past Friday, the drug reform group NORML launched an online petition urging Biden to select a cannabis-friendly attorney general who would let states determine their own marijuana laws, pardon low-level federal cannabis convictions and acknowledge the failed policies of the drug war.

“We have never been closer to ending the cruel policy of prohibition,” said NORML Executive Director Erik Altieri, “but we cannot stop pushing now.”

Marijuana Legalization Got More Votes Than Trump, Biden And Other Officials In Multiple States