The campaign behind an initiative to legalize marijuana in Arizona has their work cut out for them in the coming weeks, as a new poll shows that just a slim majority of voters support the ballot measure.

According to the poll, which was conducted by Monmouth University, 51 percent of respondents said they back the proposal, while 41 percent are against it. Six percent are undecided, while another three percent of voters said they would skip the cannabis measure on the ballot. 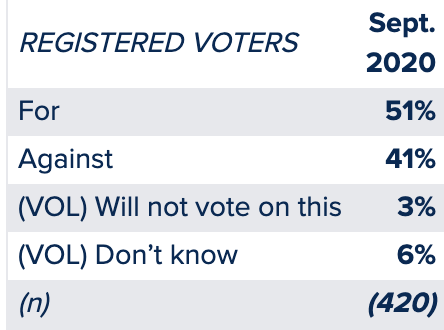 The firm ran multiple scenarios, and found that support dips to 49 percent and opposition rises to 43 percent in a high turnout model, while a low turnout situation puts the measure at 47 percent for and 47 percent against.

With weeks before the election, activists will have to do what they can to make their margin of support more comfortable. That said, a separate survey that a different polling company released in July found that significantly more Arizonans support the policy change, with 62 percent saying the state should legalize cannabis.

For this latest poll, Democrats were the most likely to back the initiative at 67 percent. Fifty-nine percent of independents and 32 percent of Republicans said they would vote for the measure.

Sixty percent of voters aged 18 to 49 said they will vote for the legalization measure, and a majority of to-64 year-olds did as well. Voters over 65 oppose it by a margin of 34 percent to 59 percent.

Interestingly, households with military service members or veterans were especially supportive of the proposal, with 57 percent of respondents in that group saying they favor legalization, with only 47 percent of non-military or vet households being on board.

The survey involved interviews with 420 Arizona registered voters from September 11-15 and has a margin of error of +/- 4.8 percentage points.

Activists turned in about 420,000 raw signatures for the cannabis legalization initiative in July, and it officially qualified last month.