In a survey of likely voters released on Tuesday, more than six-in-ten (62 percent) said they support legalizing cannabis, while 32 percent were opposed.

The campaign behind the proposed initiative, Smart and Safe Arizona, turned in roughly 420,000 signatures in support of the measure earlier this month.

On Monday evening, Secretary of State Katie Hobbs provided an update on efforts to verify those petitions.

County officials now have until August 7 to validate the submissions sent to them by the state.

20,780 petition signatures have been sent to counties for verification. If at least 11,882 signatures are validated, the initiative will qualify for the ballot. 2/2

The new survey, conducted by OH Predictive Insights on July 6 and 7, asked 600 respondents if they “believe that marijuana should be legalized for adult use in the State of Arizona.”

The poll found that support across the state and among many demographic groups has grown considerably since the last time the firm asked about the topic of legalizing cannabis in December.

It also revealed that urban, suburban and rural voters all support ending marijuana prohibition at roughly the same rate. 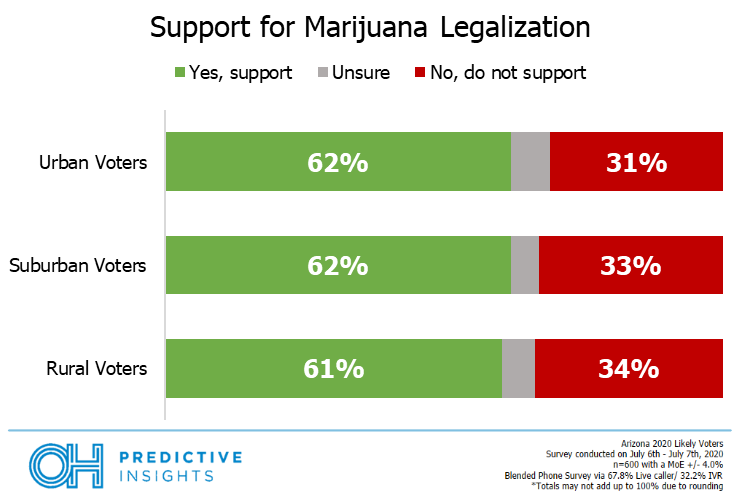 A 2016 legalization proposal was rejected by Arizona voters. But in the four years since, more states have opted to legalize and public opinion has continued to shift in favor of reform.

“Four years ago, marijuana legalization nearly came to fruition,” Mike Noble, chief of research at OH Predictive Insights, said in a press release. “And less than four months before Election Day, Arizona is on the cusp of allowing the adults to use recreational pot.”

“Unlike 2016, no credible group has raised significant money to oppose the marijuana legalization and that could be the biggest difference in 2020,” Noble said, referring to the well-funded opposition campaign backed by interests including the pharmaceutical industry that helped to defeat the proposed reform four years ago.

"Do you believe that marijuana should be legalized for adult use in the State of Arizona?"

A separate poll released by a different firm last month described the specifics of the Smart and Safe Arizona measure and found that about two-thirds (65.5 percent) of likely voters said they would support it.